In this tutorial, we’ll look at how to create a home screen App Widget using which users can add your app on their Home screen. We’ll also explore adding a Search option to the Action Bar using the Android SearchManager API.

This tutorial is an excerpt taken from the book ‘Android 9 Development Cookbook – Third Edition’, written by Rick Boyer. The book explores techniques and knowledge of graphics, animations, media, etc, to help you develop applications using the latest Android framework.

Before we dig into the code for creating an App Widget, let’s cover the basics. There are three required and one optional component:

The following is a brief overview of the available attributes:

The last required component is the layout. An App Widget uses a Remote View, which only supports a subset of the available layouts:

And it supports the following widgets:

With App Widget basics covered, it’s now time to start coding. Our example will cover the basics so you can expand the functionality as needed. This recipe uses a View with a clock, which, when pressed, opens our activity.

The following screenshot shows the widget in the widget list when adding it to the Home screen: 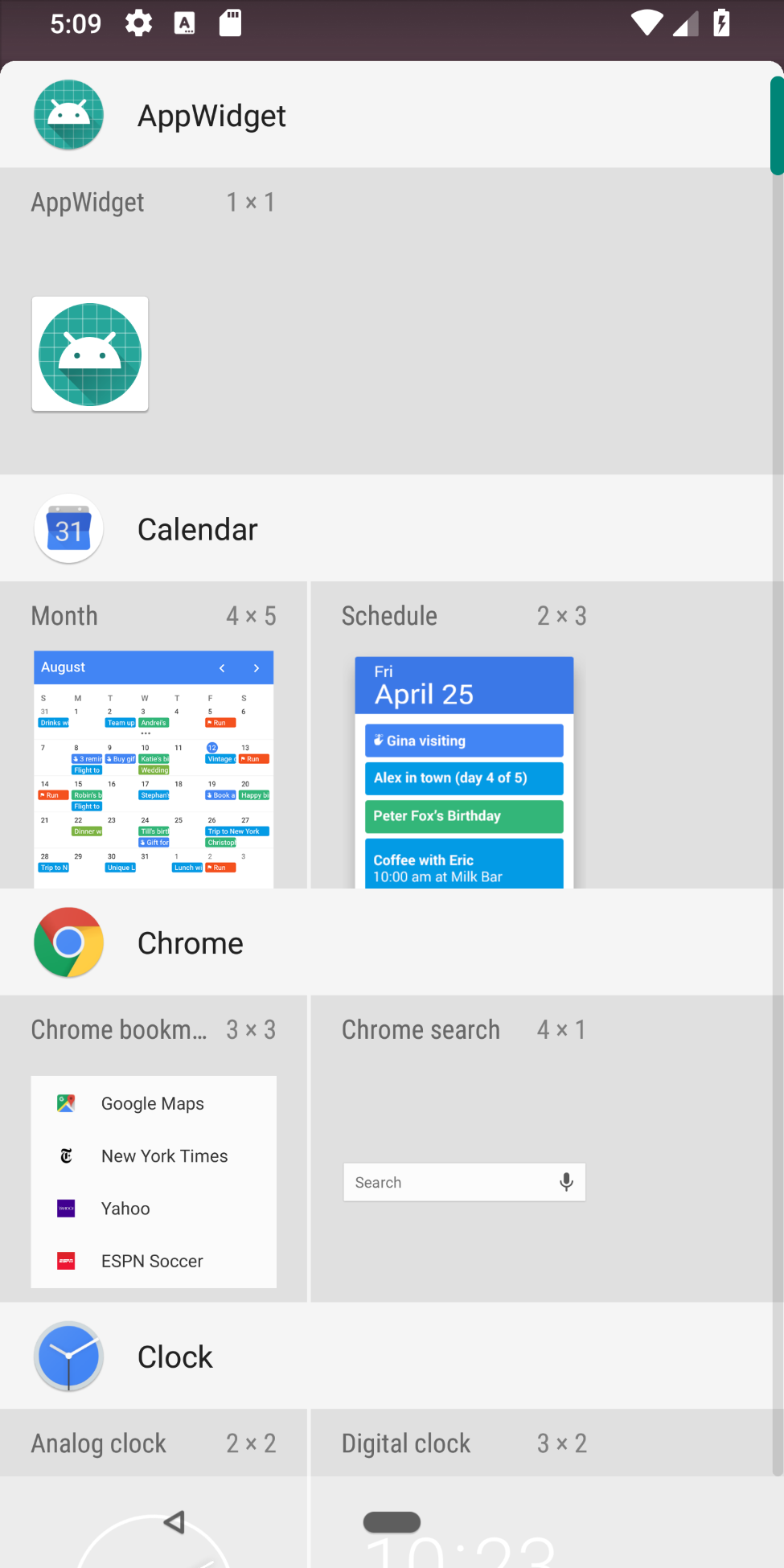 The purpose of the image is to show how to add a widget to the home screen
The widget list’s appearance varies by the launcher used.

Here’s a screenshot showing the widget after it is added to the Home screen: 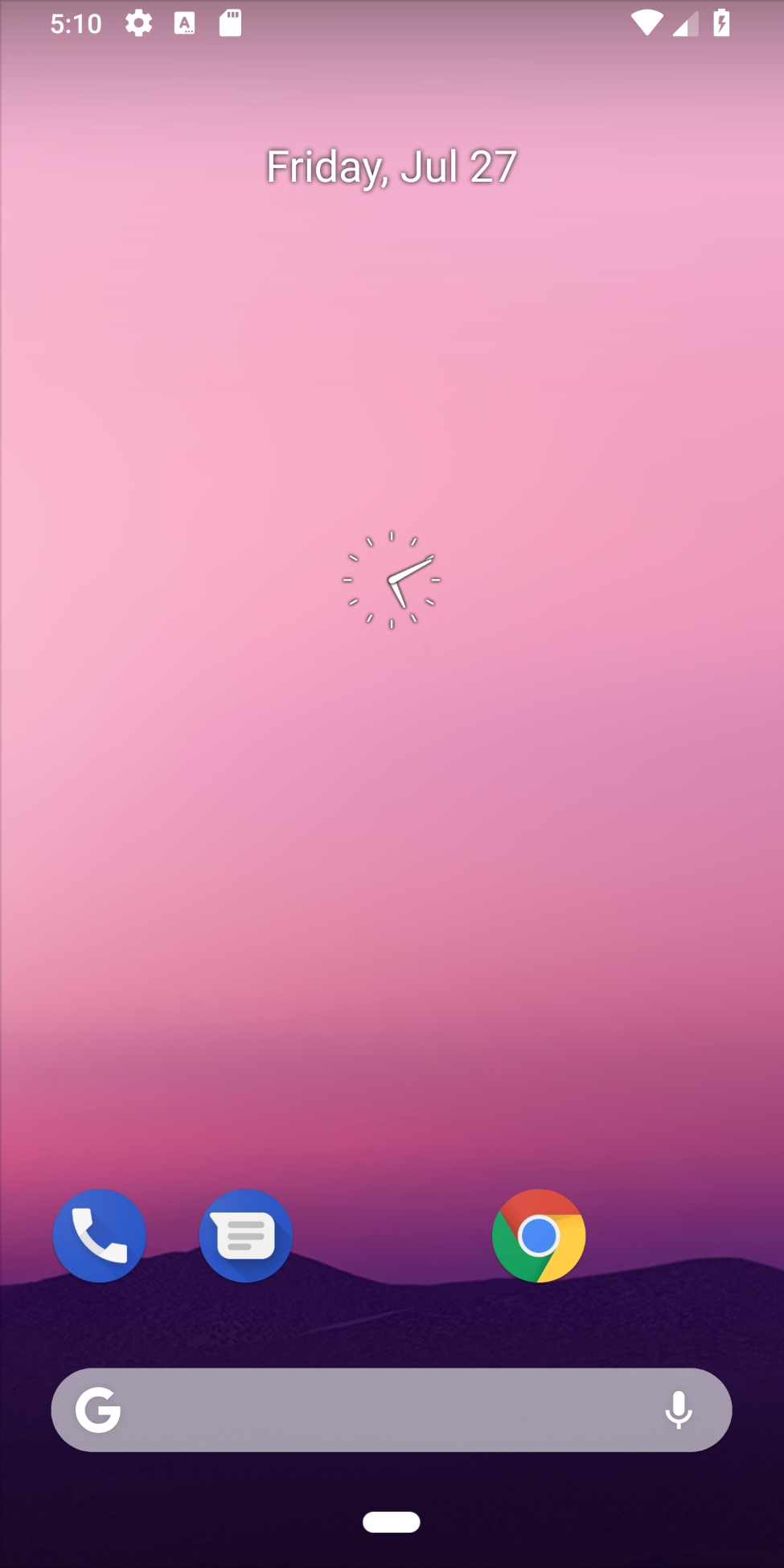 Create a new project in Android Studio and call it AppWidget. Use the default Phone & Tablet options and select the Empty Activity option when prompted for the Activity Type.

Here are the detailed steps:

If you cannot see the new XML directory, switch from Android view to Project view in the Project panel drop-down. Our first step is to create the layout file for the widget. This is a standard layout resource with the restrictions based on the App Widget being a Remote View, as discussed in the recipe introduction. Although our example uses an Analog Clock widget, this is where you’d want to expand the functionality based on your application needs.

The XML resource directory serves to store the AppWidgetProviderInfo, which defines the default widget settings. The configuration settings determine how the widget is displayed when initially browsing the available widgets. We use very basic settings for this recipe, but they can easily be expanded to include additional features, such as a preview image to show
a functioning widget and sizing options. The updatePeriodMillis attribute sets the update frequency. Since the update will wake up the device, it’s a trade-off between having up-to-date data and battery life. (This is where the optional Settings Activity is useful by letting the user decide.)

The AppWidgetProvider class is where we handle the onUpdate() event triggered by the updatePeriodMillis polling. Our example doesn’t need any updating so we set the polling to zero. The update is still called when initially placing the widget. onUpdate() is where we set the pending intent to open our app when the clock is pressed.

Since the onUpdate() method is probably the most complicated aspect of AppWidgets, we’ll explain this in some detail. First, it’s worth noting that onUpdate() will occur only once each polling interval for all the widgets is created by this provider. (All additional widgets created will use the same cycle as the first widget created.) This explains the for loop, as we need it to iterate through all the existing widgets. This is where we create a pending intent, which calls our app when the clock widget is pressed. As discussed earlier, an AppWidget is a Remote View. Therefore, to get the layout, we call RemoteViews() with our fully qualified package name and the layout ID. Once we have the layout, we can attach the pending intent to the clock view using setOnClickPendingIntent(). We call the AppWidgetManager named updateAppWidget() to initiate the changes we made.

The last step to make all this work is to declare the widget in the Android Manifest. We identify the action we want to handle with the <intent-filter>. Most App Widgets will likely want to handle the Update event, as ours does. The other item to note in the declaration is the following line:

This tells the system where to find our configuration file.

Adding Search to the Action Bar

Along with the Action Bar, Android 3.0 introduced the SearchView widget, which can be included as a menu item when creating a menu. This is now the recommended UI pattern to provide a consistent user experience.

The following screenshot shows the initial appearance of the Search icon in the Action Bar:

The following screenshot shows how the Search option expands when pressed:

If you want to add Search functionality to your application, this recipe will walk you through the steps to set up your User Interface and properly configure the Search Manager API.

Create a new project in Android Studio and call it SearchView. Use the default Phone & Tablet options and select Empty Activity when prompted for the Activity Type.

To set up the Search UI pattern, we need to create the Search menu item and a resource called searchable. We’ll create a second activity to receive the search query. Then, we’ll hook it all up in the AndroidManifest file. To get started, open the strings.xml file in res/values and follow these steps: Since the New Project Wizard uses the AppCompat library, our example uses the support library API. Using the support library provides the greatest device compatibility as it allows the use of modern features (such as the Action Bar) on older versions of the Android OS. We start by creating string resources for the Search View.

In step 4, we set up the SearchManager, using the support library APIs.

Step 6 is where we define the searchable XML resource, which is used by the SearchManager. The only required attribute is the label, but a hint is recommended so the user will have an idea of what they should type in the field.

The android:label must match the application name or the activity name and must use a string resource (as it does not work with a hardcoded string).

Steps 7-11 are for the SearchResultActivity. Calling the second activity is not a requirement of the SearchManager, but is commonly done to provide a single activity for all searches initiated in your application.

If you run the application at this point, you would see the search icon, but nothing would work. Step 12 is where we put it all together in the AndroidManifest file. The first item to note is the following:

Notice this is in the <application> element and not in either of the <activity> elements. By defining it at the <application> level, it will automatically apply to all <activities>. If we moved it to the MainActivity element, it would behave exactly the same in our example.

You can define styles for your application in the <application> node and still override individual activity styles in the <activity> node.

We specify the searchable resource in the SearchResultActivity <meta-data> element:

We also need to set the intent filter for SearchResultActivity as we do here:

You now have the Search UI pattern fully implemented. With the UI pattern complete, what you do with the search results is specific to your application needs. Depending on your application, you might search a local database or maybe a web service.

So, we discussed creating a shortcut on the Home screen, creating a Home screen widget and adding Search to the Action Bar. Be sure to check out the book ‘Android 9 Development Cookbook – Third Edition’, if you’re interested in learning how to show your app in full-screen and enable lock screen shortcuts.

How to Secure and Deploy an Android App