The famous Java programmer, Bruce Eckel, came up with a slogan which highlights the importance of testing software:

If it ain’t tested, it’s broken.

Though a confident programmer may challenge this, it beautifully highlights the ability to determine that code works as expected over and over again, without any exception. How do we know that the code we are shipping to the end user or customer is of good quality and all the user requirements would work? By testing? Yes, by testing, we can be confident that the software works as per customer requirements and specifications.

In God we trust, the rest we test.

In this article, we will understand the testing deployment model of .NET Core applications, the Live Unit Testing feature of Visual Studio 2017.

We will look at types of testing methods briefly and write our unit tests, which a software developer must write after writing any program. Software testing is conducted at various levels:

Of all these different types of testing, we will focus on unit testing, as it is done by the developer while coding the functionality.

.NET Core has been designed with testability in mind. .NET Core 2.0 has unit test project templates for VB, F#, and C#. We can also pick the testing framework of our choice amongst xUnit, NUnit, and MSTest.

Unit tests that test single programming parts are the most minimal-level tests. Unit tests should just test code inside the developer’s control, and ought to not test infrastructure concerns, for example, databases, filesystems, or network resources. Unit tests might be composed utilizing test-driven development (TDD) or they can be added to existing code to affirm its accuracy.

The naming convention of Test class names should end with Test and reside in the same namespace as the class being tested. For instance, the unit tests for the Microsoft.Example.AspNetCore class would be in the Microsoft.Example.AspNetCoreTest class in the test assembly. Also, unit test method names must be descriptive about what is being tested, under what conditions, and what the expectations are. A good unit test has three main parts to it in the following specified order:

We first arrange the code and then act on it and then do a series of asserts to check if the actual output matches the expected output. Let’s have a look at them in detail:

In this section, we will learn to write unit and integration tests for our controllers. There are a number of options available to us for choosing the test framework. We will use xUnit for all our unit tests and Moq for mocking objects. Let’s create an xUnit test project by doing the following: 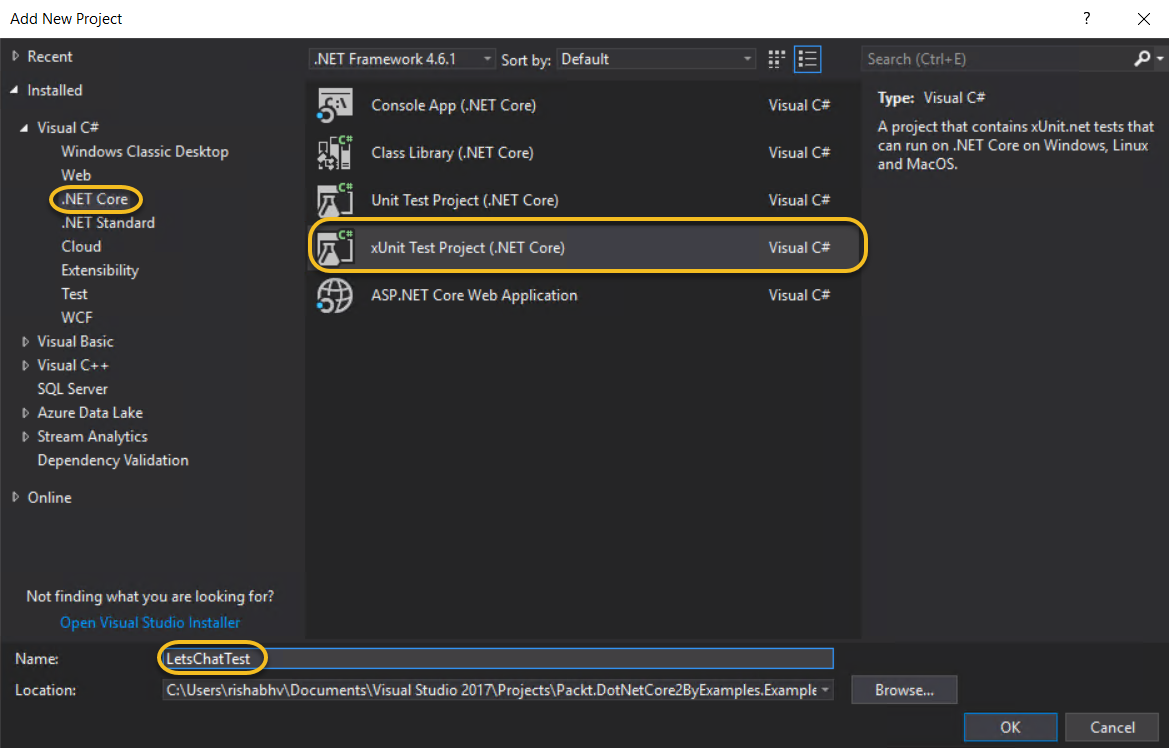 We need to add some NuGet packages. Right-click the project in VS 2017 to edit the project file and add the references manually, or use the NuGet Package Manager to add these packages:

With this, we are now ready to write our unit tests. Let’s start doing this, but before we do that, here’s some quick theory about xUnit and Moq.

The documentation from the xUnit website and Wikipedia tells us that xUnit.net is a free, open source, community-focused unit testing tool for the .NET Framework. It is the latest technology for unit testing C#, F#, Visual Basic .NET, and other .NET languages. All xUnit frameworks share the following basic component architecture:

Moq is a mocking framework for C#/.NET. It is used in unit testing to isolate the class under test from its dependencies and ensure that the proper methods on the dependent objects are being called.

Recall that in unit tests, we only test a unit or a layer/part of the software in isolation and hence do not bother about external dependencies, so we assume they work fine and just mock them using the mocking framework of our choice.

Let’s put this theory into action by writing a unit test for the following action in AuthenticationController:

Reading the comments would explain the unit test code.

The previous example shows how easy it is to write a unit test. Agreed, depending on the method to be tested, things can get complicated. But it is likely to be around mocking the objects and, with some experience on the mocking framework and binging around, mocking should not be a difficult task. The unit test for the SignOut action would be a bit complicated in terms of mocking as it uses HttpContext. The unit test for the SignOut action is left to the reader as an exercise.

It may disappoint you but Live Unit Testing (LUT) is available only in the Visual Studio 2017 Enterprise edition and not in the Community edition.

What is Live Unit Testing? It’s a new productivity feature, introduced in the Visual Studio 2017 Enterprise edition, that provides real-time feedback directly in the Visual Studio editor on how code changes are impacting unit tests and code coverage. All this happens live, while you write the code and hence it is called Live Unit Testing. This will help in maintaining the quality by keeping tests passing as changes are made. It will also remind us when we need to write additional unit tests, as we are making bug fixes or adding features. 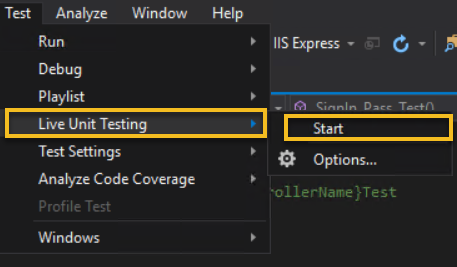 On clicking this, your CPU usage may go higher as Visual Studio spawns the MSBuild and tests runner processes in the background. In a short while, the editor will display the code coverage of the individual lines of code that are covered by the unit test. The following image displays the lines of code in AuthenticationController that are covered by the unit test. On clicking the right icon, it displays the tests covering this line of code and also provides the option to run and debug the test:

Similarly, if we open the test file, it will show the indicator there as well. Super cool, right!

If we navigate to Test|Live Unit Testing now, we would see the options to Stop and Pause. So, in case we wish to save  our resources after getting the data once, we can pause or stop Live Unit Testing:

There are numerous icons which indicates the code coverage status of individual lines of code. These are:

If you see a clock-like icon just below any of these icons, it indicates that the data is not up to date. With this productivity-enhancing feature, we conclude our discussion on basic unit testing. Next, we will learn about containers and how we can do the deployment and testing of our .NET Core 2.0 applications in containers.

To summarize, we learned the importance of testing and how we can write unit tests using Moq and xUnit. We saw a new productivity-enhancing feature introduced in Visual Studio 2017 Enterprise edition called Live Unit Testing and how it helps us write better-quality code.

You read an excerpt from a book written by Rishabh Verma and Neha Shrivastava, titled  .NET Core 2.0 By Example. This book will help you build cross-platform solutions with .NET Core 2.0 through real-life scenarios.