In this article we will show Unity 2018 primary views and windows; we will also cover layouts and the toolbar. The interface components covered in the post are the used most ones.

This article is taken from the book Getting Started with Unity 2018 written by Dr. Edward Lavieri.

When we first launch Unity, we might be intimidated by all the areas, tabs, menus, and buttons on the interface. Unity is a complex game engine with a lot of functionality, so we should expect more components for us to interact with. If we break the interface down into separate components, we can examine each one independently to gain a thorough understanding of the entire interface.

As you can see here, we have identified six primary areas of the interface. We will examine each of these in subsequent sections. As you will quickly learn, this interface is customizable. The following screenshot shows the default configuration of the Unity user interface. 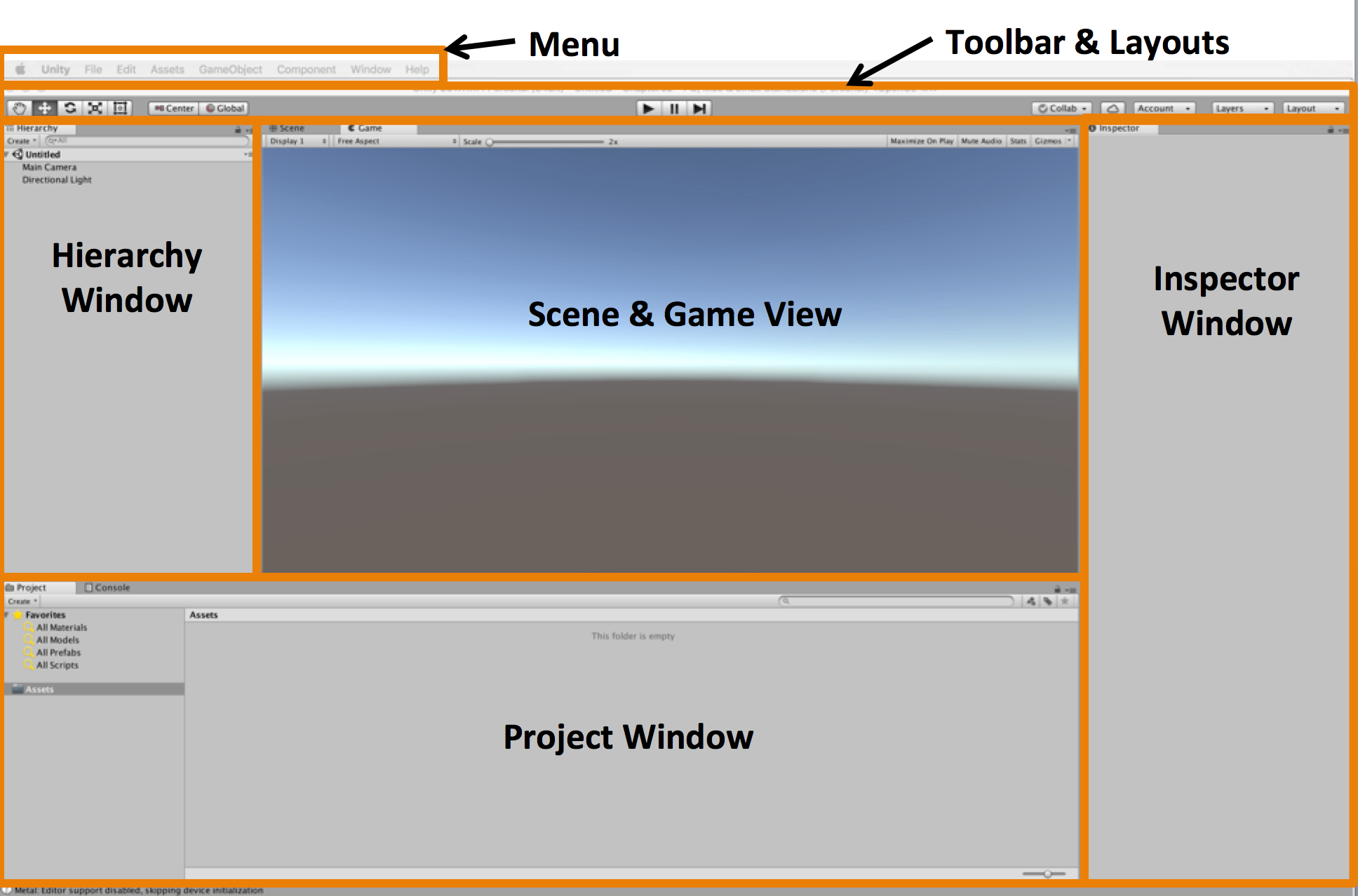 The Unity editor’s main menu bar, as depicted here, consists of eight pull-down options. We will briefly review each menu option in this section. Additional details will be provided in subsequent chapters, as we start developing our Cucumber Beetle game:

Unity’s menus are contextual. This means that only menu items pertinent to the currently selected object will be enabled. Other non-applicable menu items will appear as gray instead of black and not be selectable.

Accessing the Unity | About Unity… menu option gives you access to the version of the engine you are running. There is additional information as well, but you would probably only use this menu option to check your Unity version.

The Unity | Preferences… option brings up the Unity Preferences dialog window. That interface has seven side tabs: General, External Tools, Colors, Keys, GI Cache, 2D, and Cache Server. You are encouraged to become familiar with them as you gain experience in Unity.

The Unity | Modules option provides you with a list of playback engines that are running as well as any Unity extensions.

You can quit the Unity game engine by selecting the Unity | Quit menu option.

Unity’s File menu includes access to your game’s scenes and projects. We will use these features throughout our game development process. As you can see in the following screenshot, we also have access to the Build Settings. 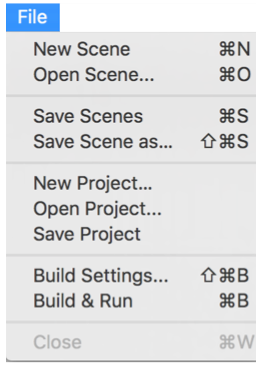 The Edit menu has similar functionality to standard editors, not just game engines. For example, the standard Cut, Copy, Paste, Delete, Undo, and Redo options are there. Moreover, the short keys are aligned with the software industry standard.

As you can see from the following screenshot, there is additional functionality accessible here. There are play, pause, and step commands. We can also sign in and out of our Unity account:

Assets are representations of things that we can use in our game. Examples include audio files, art files, and 3D models. There are several types of assets that can be used in Unity. As you can see from the following screenshot, we are able to create, import, and export assets: 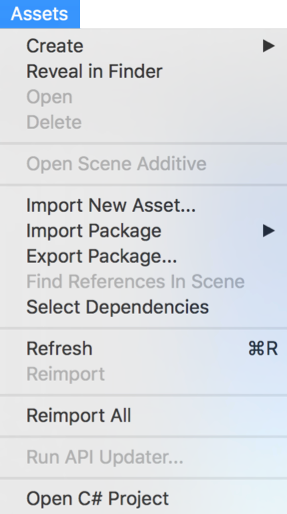 You will become increasingly familiar with this collection of functionality as you progress through the book and start developing your game.

The GameObject menu provides us with the ability to create and manipulate GameObjects. In Unity, GameObjects are things we use in our game such as lights, cameras, 3D objects, trees, characters, cars, and so much more. As you can see here, we can create an empty GameObject as well as an empty child GameObject:

We will have extensive hands-on dealings with the GameObject menu items throughout this book. At this point, it is important that you know this is where you go to create GameObjects as well as perform some manipulations on them.

We know that GameObjects are just things. They actually only become meaningful when we add components to them. Components are an important concept in Unity, and we will be working with them a lot as we progress with our game’s development. It is the components that implement functionality for our GameObjects.

The following screenshot shows the various categories of components. This is one method for creating components in Unity:

The Window menu option provides access to a lot of extra features. As you can see here, there is a Minimize option that will minimize the main Unity editor window. The Zoom option toggles full screen and zoomed view:

The Layouts option provides access to various editor layouts, to save or delete a layout.

The following table provides a brief description of the remaining options available via the Window menu item. You will gain hands-on experience with these windows as you progress through this book:

To summarize, we have discussed the Unity 2018 interface. If you are interested to know more about using Unity 2018 and want to leverage its powerful features, you may refer to the book Getting Started with Unity 2018.