In today’s tutorial, we will feature visualization of a newly discovered solar system. We will leverage the virtual reality development process for this project in order to illustrate the power of VR and ease of use of the Unity 3D engine.

This project is dioramic scene, where the user floats in space, observing the movement of planets within the TRAPPIST-1 planetary system. In February 2017, astronomers announced the discovery of seven planets orbiting an ultra-cool dwarf star slightly larger than Jupiter.

We will use this information to build a virtual environment to run on Google Cardboard (Android and iOS) or other compatible devices: 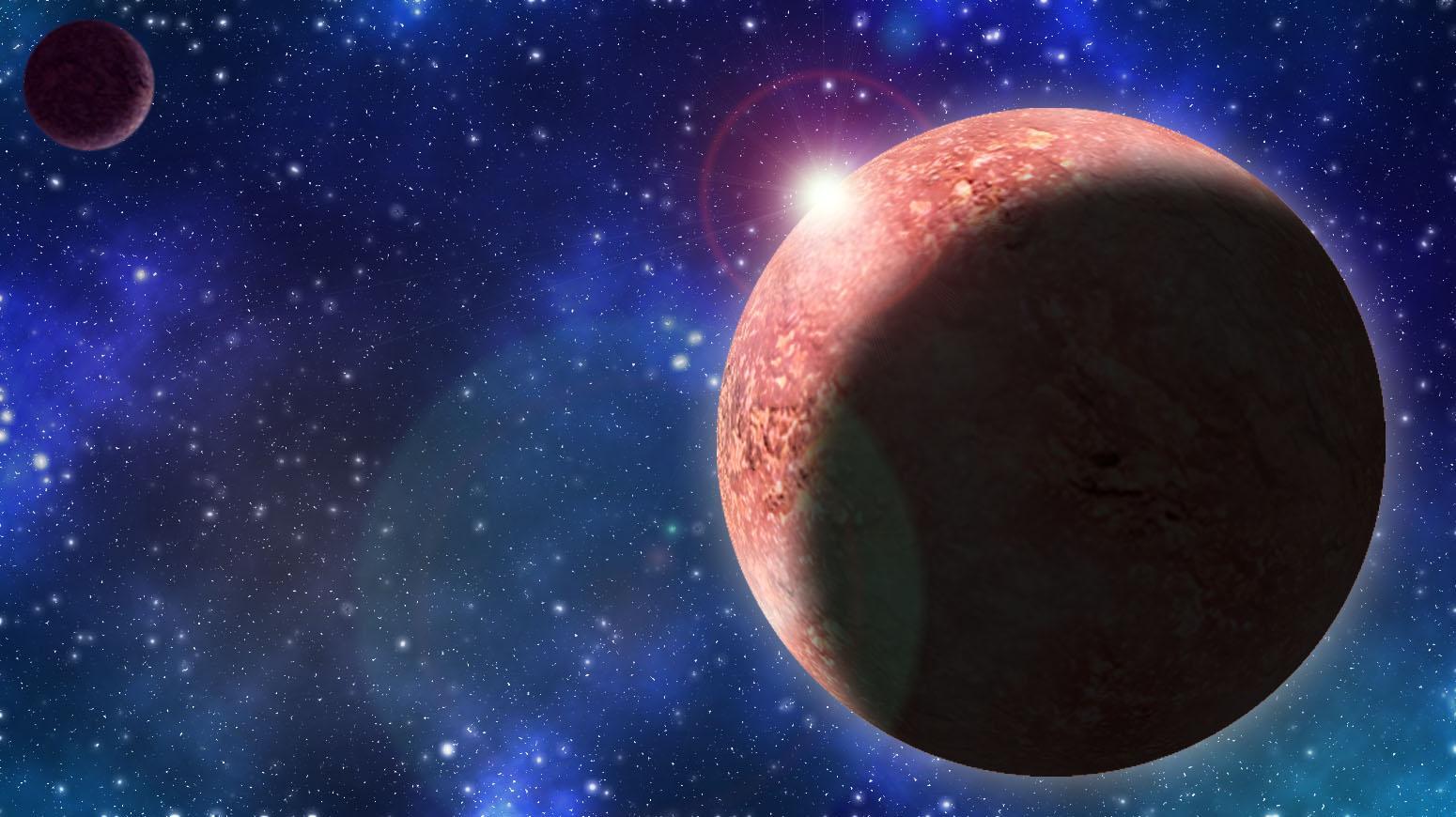 We will additionally cover the following topics:

Before we begin building the solar system, we must setup our computer environment to build the runtime application for a given VR device. If you have never built a Unity application for Android or iOS, you will need to download and install the Software Development Kit (SDK) for your chosen platform. An SDK is a set of tools that will let you build an application for a specific software package, hardware platform, game console, or operating system. Installing the SDK may require additional tools or specific files to complete the process, and the requirements change from year to year, as operating systems and hardware platforms undergo updates and revisions.

To deal with this nightmare, Unity maintains an impressive set of platform-specific instructions to ease the setup process. Their list contains detailed instructions for the following platforms:

For this project, we will be building for the most common mobile devices: Android or iOS. The first step is to visit either of the following links to prepare your computer:

Like the Unity documentation website, Google also maintains an in-depth guide for the Google VR SDK for Unity set of tools and examples. This SDK provides the following features on the device:

These features are all contained in one easy-to-use package that will be imported into our Unity scene. Download the SDK from the following link, before moving on to the next step: http://developers.google.com/cardboard/unity/download.

At the time of writing, the current version of the Google VR SDK for Unity is version 1.110.1 and it is available via a GitHub repository. The previous link should take you to the latest version of the SDK. However, when starting a new project, be sure to compare the SDK version requirements with your installed version of Unity.

Setting up the Unity environment

Like all projects, we will begin by launching Unity and creating a new project. The first steps will create a project folder which contains several files and directories: 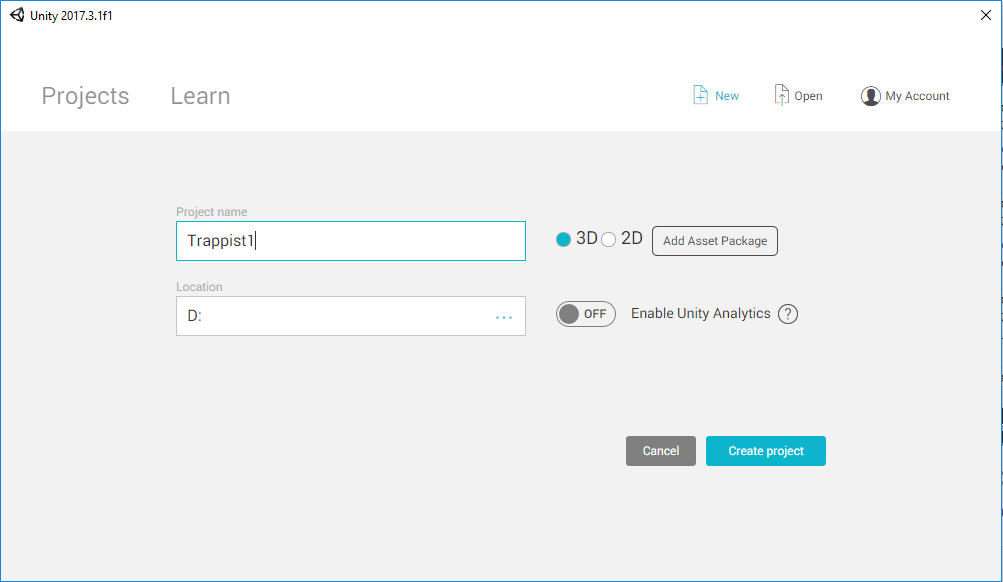 To prepare for VR, we will adjust the Build Settings and Player Settings windows. 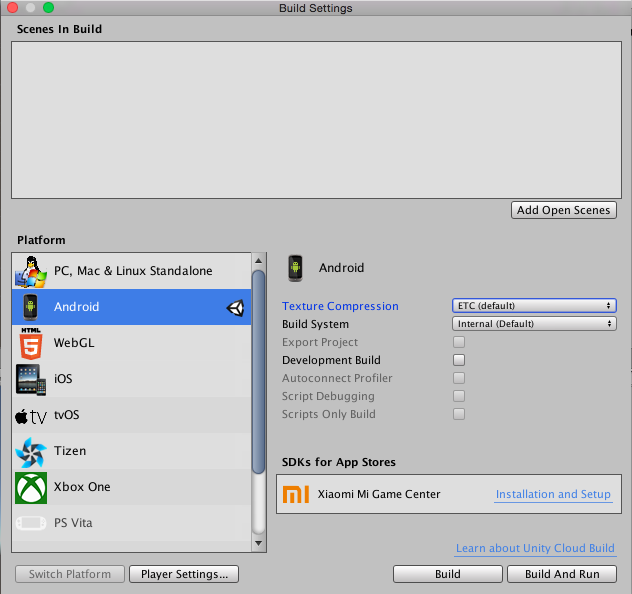 Since we will not need alpha channels, we will stick with ETC (default) for this project: 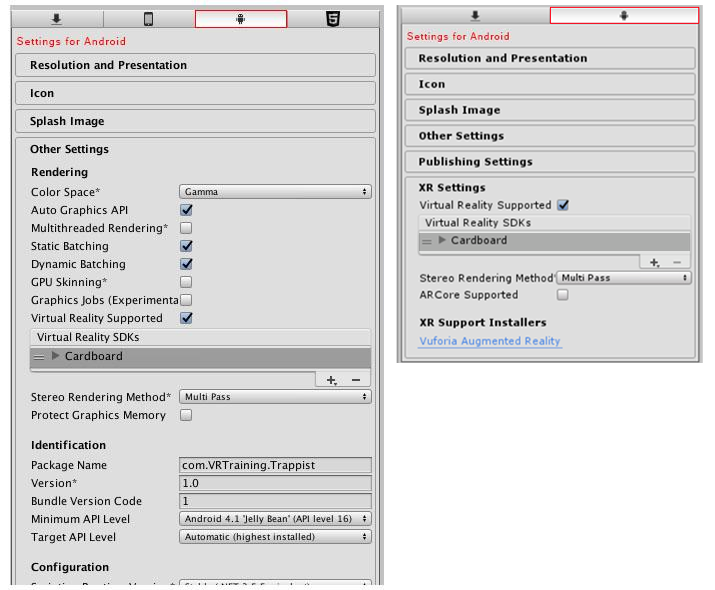 Now that we have Unity configured to build for our device, we can begin building our space themes VR environment. We have designed this project to focus on building and deploying a VR experience. If you are moderately familiar with Unity, this project will be very simple. Again, this is by design. However, if you are relatively new, then the basic 3D primitives, a few textures, and a simple orbiting script will be a great way to expand your understanding of the development platform:

This script will be used to determine each planet’s location, orientation, and relative velocity within the system. The specific dimensions will be added later, but we will start by adding some public variables.

Since we will be referring to these variables in the near future, we need a better understanding of how they will be used:

As shown within this script, the Start() method is used to set the initial position of each planet. We will add the dimensions when we create the planets, and this script will pull those values to set the starting point of each game object at runtime:

This method is called once per frame while the program is running. Within Update(), the location for each object is determined by computing where the object should be during the next frame. this.transform.RotateAround uses the sun’s pivot point to determine where the current GameObject (identified in the script by this) should appear in this frame. Then this.transform.Rotate updates how much the planet has rotated since the last frame.

Now that we have our first script, we can begin building the star and its planets. For this process, we will use Unity’s primitive 3D GameObject to create the celestial bodies:

Figure 2.5, from the TRAPPIST-1 Wikipedia page, shows the relative orbital period, distance from the star, radius, and mass of each planet. We will use these dimensions and names to complete the setup of our VR environment. Each value will be entered as public variables for their associated GameObjects: 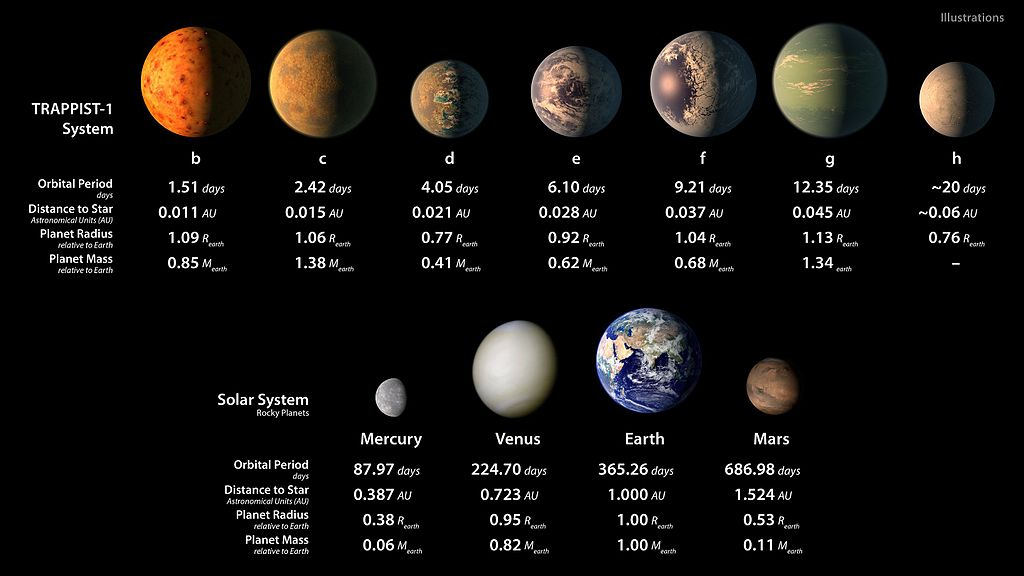 Now that our template planet has the OrbitController script, we can create the remaining planets:

This completes the layout of our solar system, and we can now focus on setting a location for the stationary player. Our player will not have the luxury of motion, so we must determine the optimal point of view for the scene: 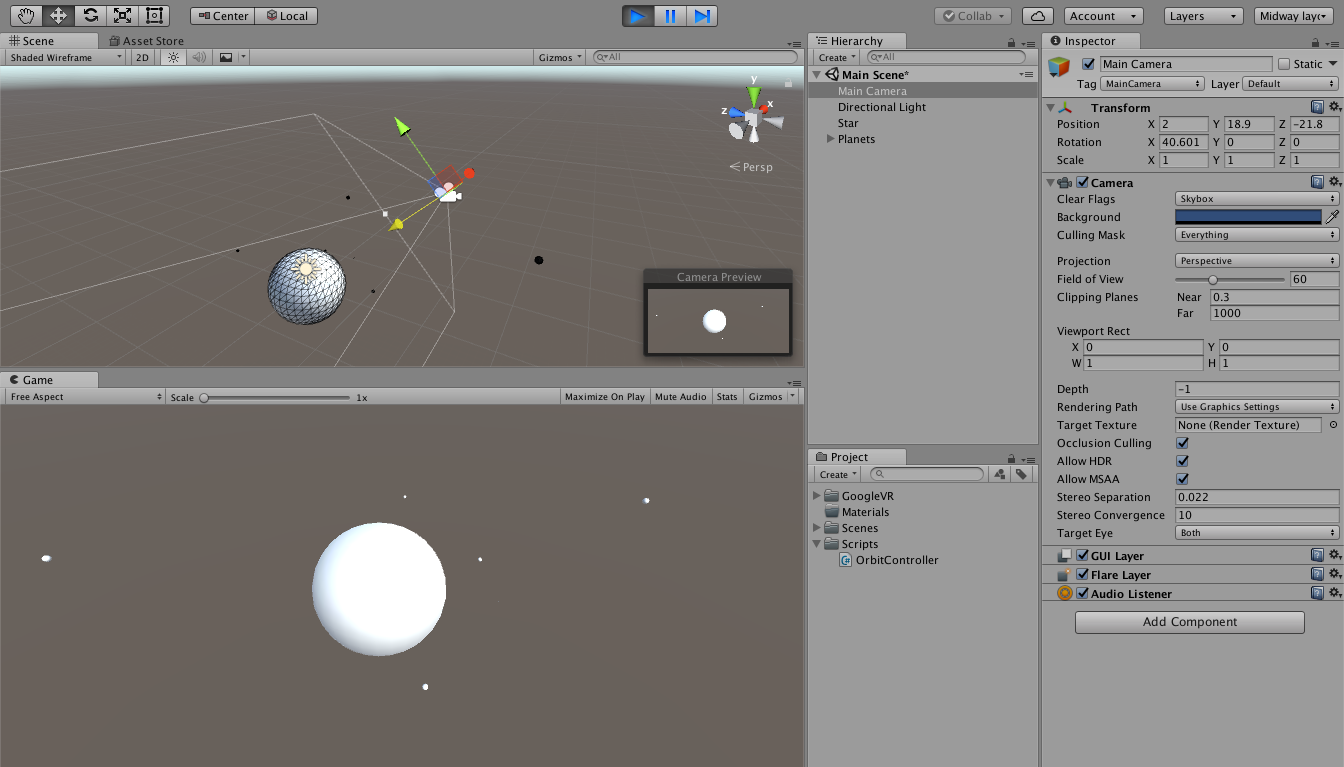 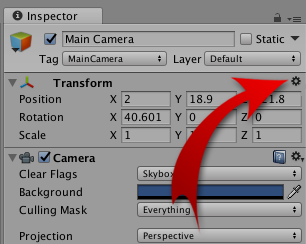 You might have noticed that we cannot really tell how fast the planets are rotating. This is because the planets are simple spheres without details. This can be fixed by adding materials to each planet. Since we really do not know what these planets look like we will take a creative approach and go for aesthetics over scientific accuracy.

The internet is a great source for the images we need. A simple Google search for planetary textures will result in thousands of options. Use a collection of these images to create materials for the planets and the TRAPPIST-1 star:

For the final design phase, we will add a space themed background using a Skybox. Skyboxes are rendered components that create the backdrop for Unity scenes. They illustrate the world beyond the 3D geometry, creating an atmosphere to match the setting.

Skyboxes can be constructed of solids, gradients, or images using a variety of graphic programs and applications. For this project, we will find a suitable component in the Asset Store: 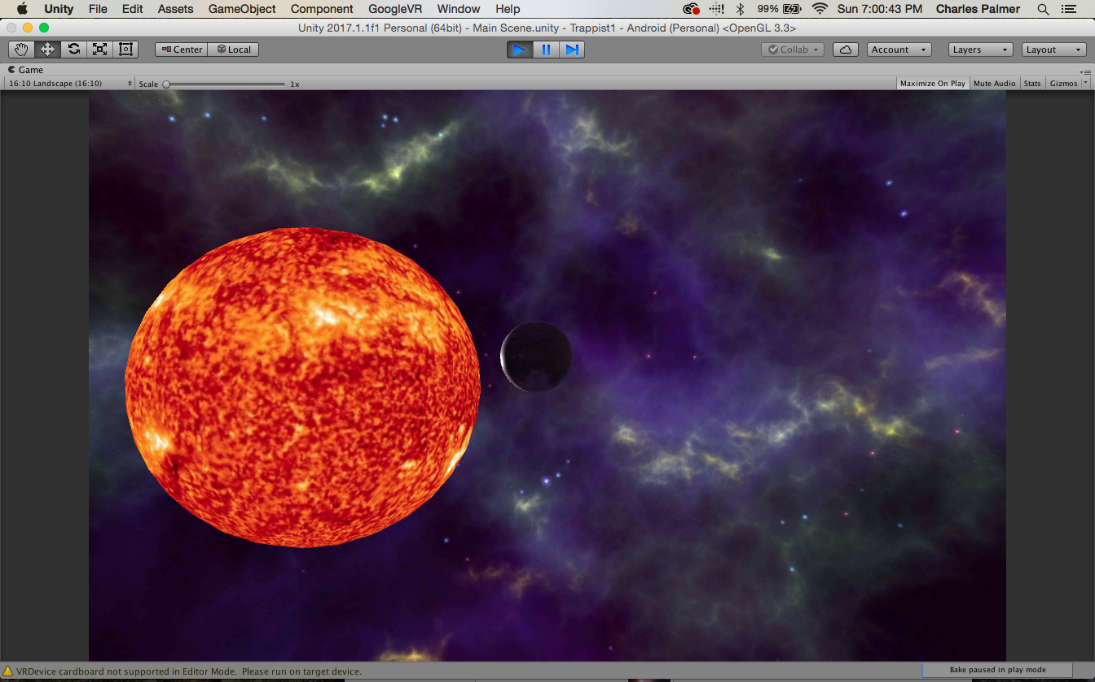 With that last step complete, we are done with the design and development phase of the project. Next, we will move on to building the application and transferring it to a device.

To experience this simulation in VR, we need to have our scene run on a head-mounted display as a stereoscopic display. The app needs to compile the proper viewing parameters, capture and process head tracking data, and correct for visual distortion. When you consider the number of VR devices we would have to account for, the task is nothing short of daunting. Luckily, Google VR facilitates all of this in one easy-to-use plugin.

The process for building the mobile application will depend on the mobile platform you are targeting. If you have previously built and installed a Unity app on a mobile device, many of these steps will have already been completed, and a few will apply updates to your existing software.

Note: Unity is a fantastic software platform with a rich community and an attentive development staff. During the writing of this book, we tackled software updates (5.5 through 2017.3) and various changes in the VR development process. Although we are including the simplified building steps, it is important to check Google’s VR documentation for the latest software updates and detailed instructions:

If you are just starting out building applications from Unity, we suggest starting out with the Android process. The workflow for getting your project export from Unity to playing on your device is short and straight forward:

Some Android users have reported an error relating to the Android SDK Tools location. The problem has been confirmed in many installations prior to Unity 2017.1. If this problem occurs, the best solution is to downgrade to a previous version of the SDK Tools. This can be done by following the steps outlined here:

If this is the first time you are creating an Android application, you might get an error indicating that Unity cannot locate your Android SDK root directory. If this is the case, follow these steps:

Install the app onto your phone and load the phone into your Cardboard device: 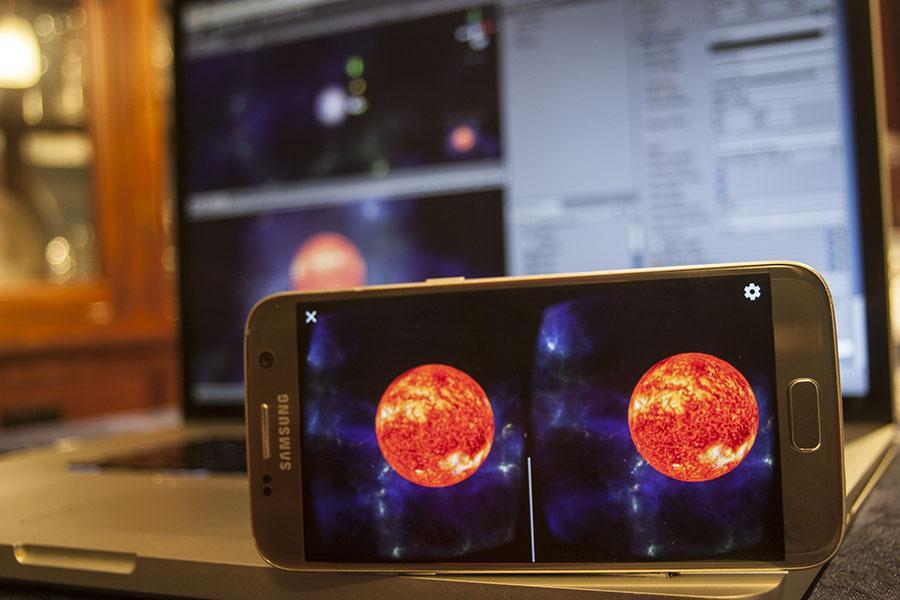 The process for building an iOS app is much more involved than the Android process. There are two different types of builds:

In either case, you will need the following items to build a modern iOS app:

For this demo, we will build an app for testing and we will assume you have completed the Getting Started steps (https://docs.unity3d.com/Manual/iphone-GettingStarted.html) from Section 1. If you do not yet have an Apple ID, obtain one from the Apple ID site (http://appleid.apple.com/). Once you have obtained an Apple ID, it must be added to Xcode:

Preparing your Unity project for iOS

We looked at the basic Unity workflow for developing VR experiences. We also provided a stationary solution so that we could focus on the development process. The Cardboard platform provides access to VR content from a mobile platform, but it also allows for touch and gaze controls.

You read an excerpt from the book, Virtual Reality Blueprints, written by Charles Palmer and John Williamson. In this book, you will learn how to create compelling Virtual Reality experiences for mobile and desktop with three top platforms—Cardboard VR, Gear VR, and OculusVR.