Social engineering is one of the most dangerous threats facing every individual and modern organization. Phishing is a well-known, computer-based, social engineering technique. Attackers use disguised email addresses as a weapon to target large companies. With the huge number of phishing emails received every day, companies are not able to detect all of them. That is why new techniques and safeguards are needed to defend against phishing. This article will present the steps required to build three different machine learning-based projects to detect phishing attempts, using cutting-edge Python machine learning libraries.

We will use the following Python libraries:

Make sure that they are installed before moving forward. You can find the code files here.

This article is an excerpt from a book written by Chiheb Chebbi titled Mastering Machine Learning for Penetration Testing. In this book, you will you learn how to identify loopholes in a self-learning security system and will be able to efficiently breach a machine learning system.

The Social Engineering Engagement Framework (SEEF) is a framework developed by Dominique C. Brack and Alexander Bahmram. It summarizes years of experience in information security and defending against social engineering. The stakeholders of the framework are organizations, governments, and individuals (personals). Social engineering engagement management goes through three steps:

There are many social engineering techniques used by criminals:

To perform a social engineering penetration test, you need to follow the following steps: 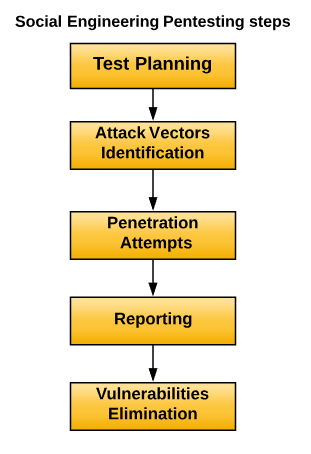 In the next sections, we are going to learn how to build machine learning phishing detectors. We will cover the following two methods:

In this section, we are going to build a phishing detector from scratch with a logistic regression algorithm. Logistic regression is a well-known statistical technique used to make binomial predictions (two classes).

Like in every machine learning project, we will need data to feed our machine learning model. For our model, we are going to use the UCI Machine Learning Repository (Phishing Websites Data Set). You can check it out at https://archive.ics.uci.edu/ml/datasets/Phishing+Websites:

The dataset is provided as an arff file: 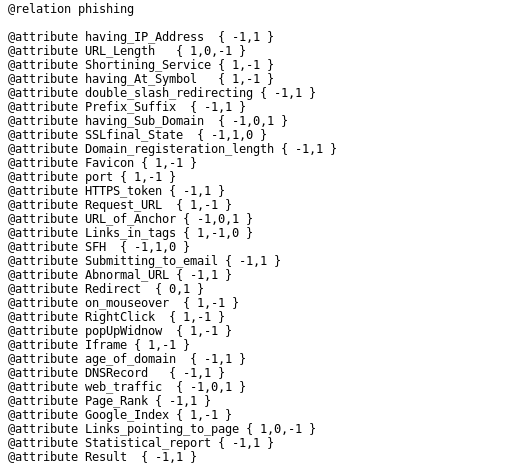 The following is a snapshot from the dataset: 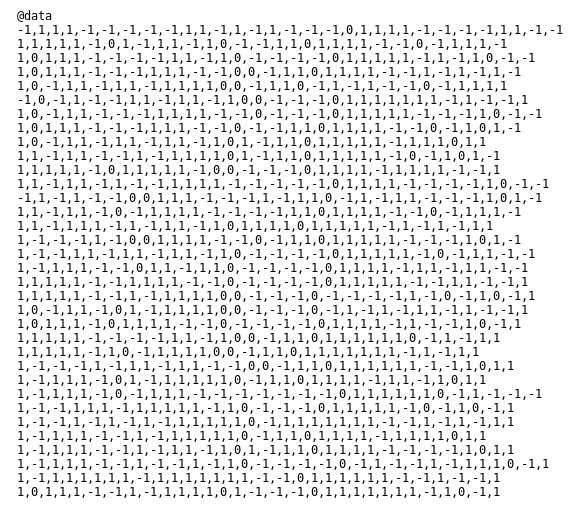 For better manipulation, we have organized the dataset into a csv file:

As you probably noticed from the attributes, each line of the dataset is represented in the following format – {30 Attributes (having_IP_Address URL_Length, abnormal_URL and so on)} + {1 Attribute (Result)}:

For our model, we are going to import two machine learning libraries, NumPy and scikit-learn.

Let’s open the Python environment and load the required libraries:

Next, load the data:

Identify the inputs (all of the attributes, except for the last one) and the outputs (the last attribute):

We need to divide the dataset into training data and testing data:

Let’s print out the accuracy of our phishing detector model:

The accuracy of our model is approximately 85%. This is a good accuracy, since our model detected 85 phishing URLs out of 100. But let’s try to make an even better model with decision trees, using the same data.

Then, print out the results:

The accuracy of the second model is approximately 90.4%, which is a great result, compared to the first model. We have now learned how to build two phishing detectors, using two machine learning techniques.

NLP is the art of analyzing and understanding human languages by machines. According to many studies, more than 75% of the used data is unstructured. Unstructured data does not have a predefined data model or not organized in a predefined manner. Emails, tweets, daily messages and even our recorded speeches are forms of unstructured data. NLP is a way for machines to analyze, understand, and derive meaning from natural language. NLP is widely used in many fields and applications, such as:

Generally, there are two different components of NLP:

Every NLP project goes through five steps. To build an NLP project the first step is identifying and analyzing the structure of words. This step involves dividing the data into paragraphs, sentences, and words. Later we analyze the words in the sentences and relationships among them. The third step involves checking the text for  meaningfulness. Then, analyzing the meaning of consecutive sentences. Finally, we finish the project by the pragmatic analysis. 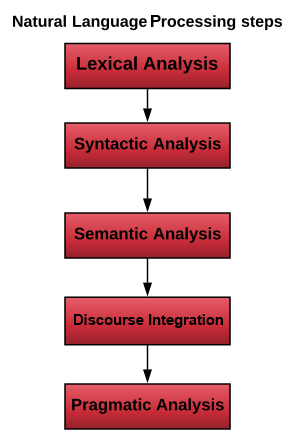 There are many open source Python libraries that provide the structures required to build real-world NLP applications, such as:

Let’s fire up our Linux machine and try some hands-on techniques.

You can also type: 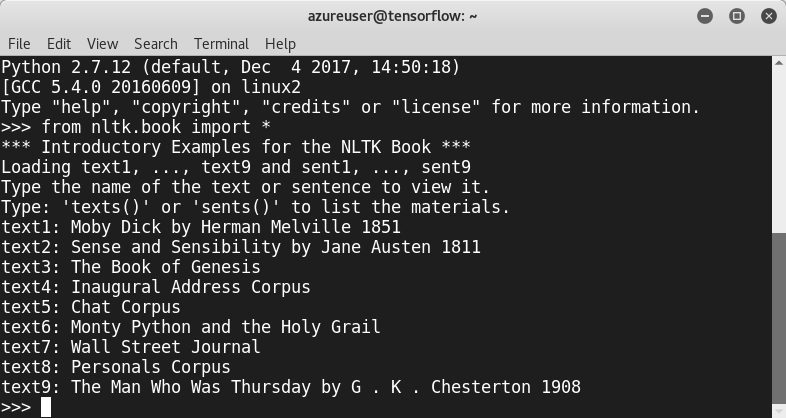 To get text from a link, it is recommended to use the urllib module to crawl a website:

As a demonstration, we are going to load a text called Security.in.Wireless.Ad.Hoc.and.Sensor.Networks:

We crawled the text file, and used len to check its length and raw[:50] to display some content. As you can see from the screenshot, the text contains a lot of symbols that are useless for our projects. To get only what we need, we use tokenization:

To summarize what we learned in the previous section, we saw how to download a web page, tokenize the text, and normalize the words.

Now it is time to build our spam detector using the NLTK. The principle of this type of classifier is simple; we need to detect the words used by spammers. We are going to build a spam/non-spam binary classifier using Python and the nltk library, to detect whether or not an email is spam. First, we need to import the library as usual:

We need to load data and feed our model with an emails dataset. To achieve that, we can use the dataset delivered by the Internet CONtent FIltering Group. You can visit the website at https://labs-repos.iit.demokritos.gr/skel/i-config/:

For our project, we are going to use the Enron-spam dataset:

To shuffle the emails, let’s write a small Python script, Shuffle.py, to do the job:

Just change the directory variable, and it will shuffle the files:

After preparing the dataset, you should be aware that, as we learned previously, we need to tokenize the emails:

Also, we need to perform another step, called lemmatizing. Lemmatizing connects words that have different forms, like hacker/hackers and is/are. We need to import WordNetLemmatizer:

Create a sentence for the demonstration, and print out the result of the lemmatizer:

Then, we need to remove stopwords, such as of, is, the, and so on:

To process the email, a function called Process must be created, to lemmatize and tokenize our dataset:

The second step is feature extraction, by reading the emails’ words:

As a classification algorithm, we are going to use NaiveBayesClassifier: 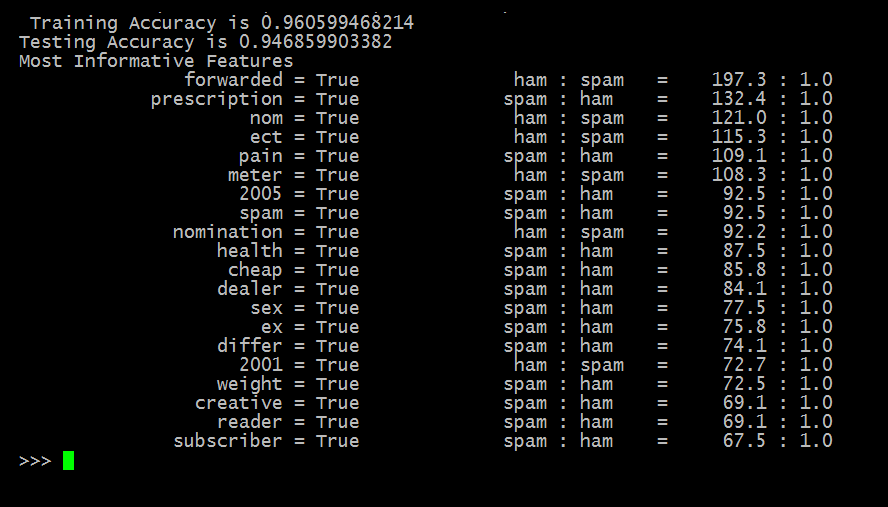 In this article, we learned to detect phishing attempts by building three different projects from scratch. First, we discovered how to develop a phishing detector using two different machine learning techniques—logistic regression and decision trees. The third project was a spam filter, based on NLP and Naive Bayes classification.

To become a master at penetration testing using machine learning with Python, check out this book Mastering Machine Learning for Penetration Testing.