Learning is more fun if we do it while making games. With this thought, let’s continue our quest to learn .NET Core 2.0 by writing a Tic-tac-toe game in .NET Core 2.0. We will develop the game in the ASP.NET Core 2.0 web app, using SignalR Core. We will follow a step-by-step approach and use Visual Studio 2017 as the primary IDE, but will list the steps needed while using the Visual Studio Code editor as well.

Let’s do the project setup first and then we will dive into the coding.

This tutorial has been extracted from the book .NET Core 2.0 By Example, by Rishabh Verma and Neha Shrivastava.

With this, we will have a basic working ASP.NET Core 2.0 MVC app in place. However, to leverage SignalR Core in our app, we need to install SignalR Core NuGet and the client packages.

To install the SignalR Core NuGet package, we can perform one of the following two approaches in the Visual Studio IDE: 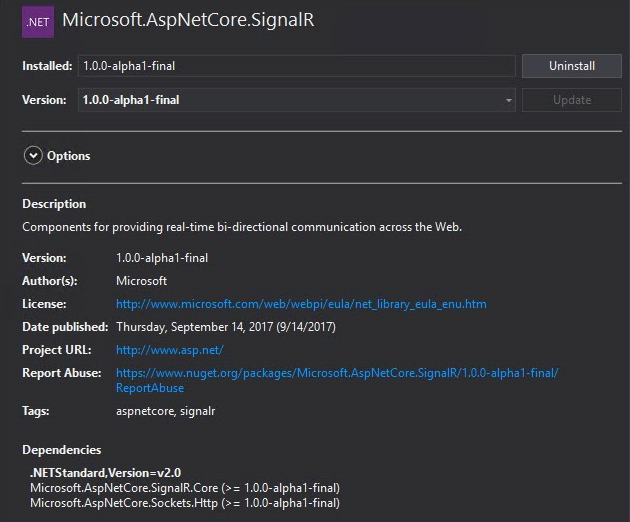 Now we have server-side packages installed. We still need to install the client-side package of SignalR, which is available through npm. To do so, we need to first ascertain whether we have npm installed on the machine or not. If not, we need to install it. npm is distributed with Node.js, so we need to download and install Node.js from https://nodejs.org/en/. The installation is quite straightforward.

Once this installation is done, open a Command Prompt at the project location and run the following command:

With this, we are done with the project setup and we are ready to use SignalR goodness as well. So let’s dive into the coding.

In this section, we will implement our gaming solution. The end output will be the working two-player Tic-Tac-Toe game. We will do the coding in steps for ease of understanding:

The following is the code for both methods, for the sake of clarity and completion. Other methods and properties are removed for brevity:

After adding these references, create the simple HTML UI for the image preview and registration, as follows:

The code comments make it self-explanatory. The class should derive from the SignalR Hub class for it to be recognized as Hub.

There are two methods of interest which can be overridden. Notice that both the methods follow the async pattern and hence return Task:

There are also a few properties that the hub class exposes:

To keep the things simple, we are not using a database to keep track of our registered players. Rather we will use an in-memory collection to keep the registered players. We could have used a normal list of players, such as List<Player>, but then we would need all the thread safety and use one of the thread safety primitives, such as lock, monitor, and so on, so we are going with ConcurrentBag<Player>, which is thread safe and reasonable for our game development.

That explains the declaration of the players collection in the class. We will need to do some housekeeping to add players to this collection when they resister and remove them when they disconnect.

This is just one of the simple ways of accepting the client data for demonstration purposes, we can also use strongly typed parameters. In this method, we split the string on # and extract the name as the first part and the image as the second part. We then check if the player with the current connection ID already exists in our players collection.

If it doesn’t, we create a Player object with default values and add them to our players collection. We are distinguishing the player based on the name for demonstration purposes, but we can add an Id property in the Player class and make different players have the same name also. After the registration is complete, the server needs to update the player, that the registration is complete and the player can then look for the opponent.

On the Clients property, we can choose a client having a specific connection ID (in this case, the current connection ID from the Context) and then call InvokeAsync to invoke a method on the client specifying the method name and parameters as required. In the preceding case method, the name is registrationComplete with no parameters.

In both the cases, the server would do some processing and invoke a method on the client. Since we need a lot of different user interfaces for different scenarios, let’s code the HTML markup inside div to make it easier to show and hide sections based on the server response. We will add the following code snippet in the body. The comments specify the purpose of each of the div elements and markup inside them:

The following client-side code would take care of Steps 7 and 8. Though the comments are self-explanatory, we will quickly see what all stuff is that is going on here. We handle the registartionComplete method and display the Find Opponent Player section. This section has a button to find an opponent player called btnFindOpponentPlayer.

We define the event handler of the button to invoke the FindOpponent method on the hub. We will see the hub method implementation later, but we know that the hub method would either find an opponent or would not find an opponent, so we have defined the methods opponentFound and opponentNotFound, respectively, to handle these scenarios. In the opponentNotFound method, we just display a section in which we say, we do not have an opponent player.

In the opponentFound method, we display the game section, game information section, opponent display picture section, and draw the Tic-Tac-Toe game board as a 3×3 grid using CSS styling. All the other sections are hidden:

First we need to have a Game object to track a game, players involved, moves left, and check if there is a winner. We will have a Game class defined as per the following code. The comments detail the purpose of the methods and the properties defined:

Now we have the entire game mystery solved with the Game class. We know when the game is over, we have the method to place the player marker, and check the winner. The following server side-code on the GameHub will handle Steps 7 and 8:

Here, we have created a games collection to keep track of ongoing games and a Random field named toss to simulate the coin toss. How FindOpponent works is documented in the comments and is intuitive to understand.

After every move, both players need to be updated by the server about the move made, so that both players’ game boards are in sync. So, on the server side we will need an additional model called MoveInformation, which will contain information on the latest move made by the player and the server will send this model to both the clients to keep them in sync:

Finally, we will wire up the remaining methods in the GameHub class to complete the game coding. The MakeAMove method is called every time a player makes a move. Also, we have overidden the OnDisconnectedAsync method to inform a player when their opponent disconnects. In this method, we also keep our players and games list current. The comments in the code explain the workings of the methods:

With this, we are done with the coding of the game and are ready to run the game app. So there you have it! You’ve just built your first game in .NET Core! The detailed source code can be downloaded from Github.

If you’re interested in learning more, head on over to get the book, .NET Core 2.0 By Example, by Rishabh Verma and Neha Shrivastava.