One of Wireshark’s strengths is its statistical tools. When using Wireshark, we have various types of tools, starting from the simple tools for listing end-nodes and conversations, to the more sophisticated tools such as flow and I/O graphs.

In this article, we will look at the simple tools in Wireshark that provide us with basic network statistics i.e; who talks to whom over the network, what are the chatty devices, what packet sizes run over the network, and so on.

To start statistics tools, start Wireshark, and choose Statistics from the main menu.

In this recipe, we will learn how to get general information from the data that runs over the network. The capture file properties in Wireshark 2 replaces the summary menu in Wireshark 1.

What you will get is the Capture File Properties window (displayed in the following screenshot). 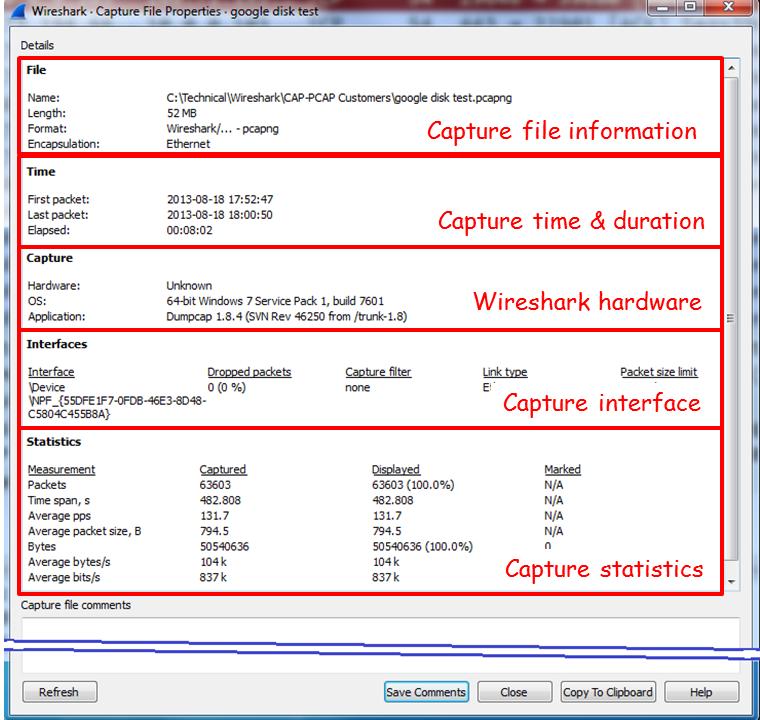 In this recipe, we will learn how to get protocol hierarchy information of the data that runs over the network. 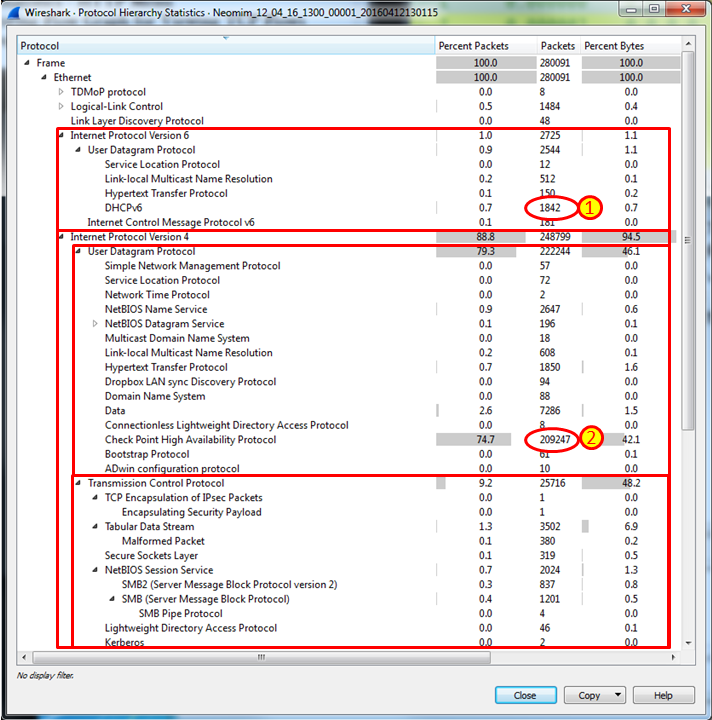 What you will get is the Protocol Hierarchy window:

In this file example, we can see two interesting issues:

Simply, it calculates statistics over the captured data. Some important things to notice:

Using the statistics for conversations menu

In this recipe, we will learn how to get conversation information of the data that runs over the network.

From the Statistics menu, choose Conversations:

The following window will come up:

You can use this statistics tools for:

If you see that there is a lot of traffic going out to port 80 (HTTP) on a specific IP address on the internet, you just have to copy the address to your browser and find the website that is most popular with your users.

If you don’t get anything, simply go to a standard DNS resolution website (search Google for DNS lookup) and find out what is loading your internet line.

For viewing IP addresses as names, you can check the Name resolution checkbox for name resolution (1 in the previous screenshot). For seeing the name resolution, you will first have to enable it by choosing View | Name Resolution | Enable for Network layer.

A new feature in Wireshark version 2 is the graph feature, marked as (5) in the previous screenshot. When you choose a specific line in the TCP conversations statistics and click Graph…, it brings you to the TCP time/sequence (tcptrace) stream graph.

To copy table data, click on the Copy button (3). In TCP or UDP, you can mark a specific line, and then click on the Follow Stream… button (4). This will define a display filter that will show you the specific stream of data. As you can see in the following screenshot, you can also right-click a line and choose to prepare or apply a filter, or to colorize a data stream:

We also see that, unlike the previous Wireshark version, in which we saw all types of protocols in the upper tabs, here we can choose which protocols to see when only the identified protocols are presented by default.

Using the statistics for endpoints menu

In this recipe, we will learn how to get endpoint statistics information of the captured data.

In this window, you will be able to see layer 2, 3, and 4 endpoints, which is Ethernet, IP, and TCP or UDP.

From the left-hand side of the window you can see (here is an example for the TCP tab):

At the bottom of the window we have the following checkboxes:

Quite simply, it gives statistics on all the endpoints Wireshark has discovered. It can be any situation, such as the following:

We learned about Wireshark’s basic statistic tools and how you can leverage those for network analysis. Get over 100 recipes to analyze and troubleshoot network problems using Wireshark 2 from this book Network Analysis using Wireshark 2 Cookbook – Second Edition.