This article is an excerpt from the book,  Kotlin Blueprints, written by Ashish Belagali, Hardik Trivedi, and Akshay Chordiya. With this book, you will learn how to design and prototype professional-grade applications using various features of Kotlin.

Historically, different languages have used strategies appropriate for those times to become the universal programming languages:

Another two decades have passed, and the stage is all set to welcome the next universal language. Let’s examine Kotlin’s strategy to become that.

Why Kotlin vs Java?

The TIOBE index is widely referred to as a gauge of the popularity of programming languages. Updated to August 2017, the index graph is reproduced in the following illustration:

The interesting point is that while Java has been the #1 programming language in the world for the last 15 years or so, it has been in a steady state of decline for many years now. Many new languages have kept coming, and existing ones have kept improving, chipping steadily into Java’s developer base; however, none of them have managed to take the #1 position from Java so far.

Today, Kotlin is poised to become the most serious challenger for the better Java crown, and subsequently, to take the first place, for reasons that we will see shortly. Presently at 41st place, Kotlin is marching ahead at a fast pace. In May 2017, Google announced Kotlin to be the officially supported language for Android development in league with Java. This has turned out to be a major boost for Kotlin, and the rate of its adoption has accelerated ever since.

Why not other languages?

Many languages prior to Kotlin have tried to become a better Java. Let’s see why they could never become one.

Every language attracts the programmer community by giving them an ability to do something that was cumbersome before. Their adoption is directly driven by how much value the promise has for them and how much faith the community can put into that promise.

All languages or frameworks that claimed to be a better Java and offered something worthwhile beyond what Java offers also took something back in turn. Here are a few examples:

Unlike other languages, Kotlin offers a lot of power over Java, while not taking anything away. Let’s take a look at the following screenshot to see how: 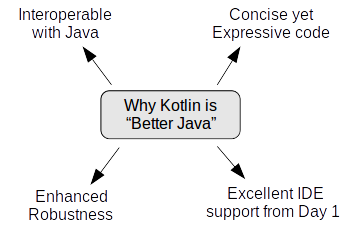 Kotlin is interoperable with Java. It is possible to write applications containing both Java and Kotlin code, calling one from the other. Calling Java code from Kotlin is simpler, as opposed to the other way around, but the former will be the case most of the times anyway, where new Kotlin code is added on top of legacy Java code. Kotlin is interoperable and can use all the Java libraries and legacy coding without having to do any code conversion. It is possible to inject Kotlin into a Java project without boiling the ocean.

While being interoperable, Kotlin code is far superior to Java code. Like Scala, Kotlin uses type inference to cut down on a lot of boilerplate code and makes it concise. (Type inference is a better feature than dynamic typing as it reduces the code without sacrificing the robustness of the end product). However, unlike Scala, Kotlin code is easy to read and understand, even for someone who may not know Kotlin.

Kotlin’s data class construct is the most prominent example of being concise as shown in the following:

Compared to its Java counterpart, the preceding line has packed into it the class definition, member variables, constructor, getter-setter methods, and also the utility methods, such as equals() and hashCode(). This will easily take 15-20 lines of Java code.

The data classes construct is not an isolated example. There are many others where the syntax is concise and expressive. Consider the following as additional examples:

Statically typed languages have a built-in safety net because of the assurance that the compiler will catch any incorrect type cast. Both Java and Kotlin support static typing.

With Java Generics introduced in Java 1.5, they both fare better over the Java releases prior to 1.5.

With Kotlin, the definition of someOperation() itself will return either String or String? and then there are implications on the subsequent code, so the developer just cannot go wrong. Refer the  following table:

One may point out that Java developers can use the @Nullable and @NotNull annotations or the Optional class; however, these were added quite late, most developers are not aware of them, and they can always get away with not using them, as the code does not break. Finally, they are not as elegant as putting a question mark.

There is also a subtle point here. If a Kotlin developer is careless, he would write just the type name, which would automatically become a non-nullable declaration. If he wanted to make it nullable, he would have to  key in that extra question mark deliberately. Thus, you are on the side of caution, and that is as far as keeping the code robust is concerned.

Another example of this robustness is found in the var/val declarations. Seasoned programmers know that most variables get a value assigned to them only once. In Kotlin, while declaring the variable, you choose val for such a variable. At the time of variable declaration, the programmer has to select between val and var, and so he puts some thought into it. On the other hand, in Java, you can get away with just declaring the type with its name, and you will rarely find any Java code that defines a variable with the final keyword, which is Java’s way of declaring that the variable can be assigned a value only once.

Basically, with the same maturity level of programmers, you expect a relatively more robust code in Kotlin as opposed to Java, and that’s a big win from the business perspective.

Excellent IDE support from day one

Kotlin comes from JetBrains, who also develop a well-known Java integrated development environment (IDE): IntelliJ IDEA. JetBrains developers made sure that Kotlin has first-class support in IDEA. Not only that, they also developed a Kotlin plugin for Eclipse, which is the #1 most widely used Java IDE.

Contrast this with the situation when Java appeared on the scene roughly two decades ago. There was no good IDE support. Programmers were asked to use simple text editors. Coding Java was hard, with no safety net provided by an IDE, until the Eclipse editor was open-sourced.

In the case of Kotlin, the editor’s suggestions being available from day one means that they can learn the language faster, make fewer mistakes, and write good quality compilable code with relative ease. Clearly, Kotlin does not want to waste any time in climbing up the ladder of popularity.

Beyond being a better Java

We saw that on the JVM platform, Kotlin is neat and quite superior. However, Kotlin has set its eyes beyond the JVM. Its strategy is to win based on its superior and modern feature set.

Before we go ahead, let’s list the top five appeals of Kotlin:

Kotlin is in the winning camp

The features of Kotlin have a good validation when one considers that other languages, which have similar features, are also growing in popularity:

The Kotlin developers figured that the same strategy that is used on the JVM platform could be used on other platforms too. Consider the following illustration: 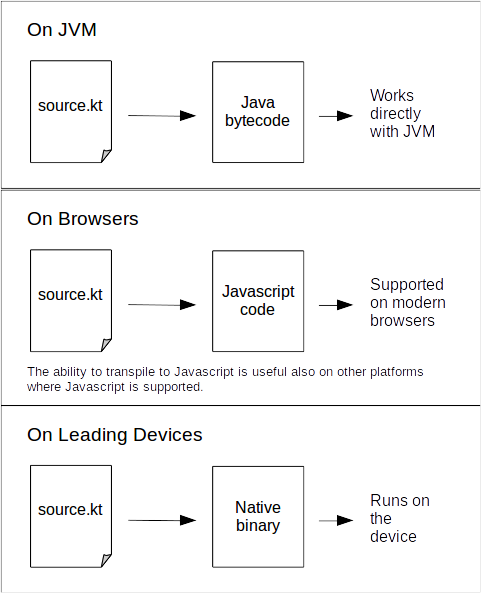 On no platform does Kotlin disrupt the platform’s existing technology:

Since the platform’s technology is not disrupted, there are zero changes needed at the platform level to adopt Kotlin. Kotlin’s compatibility with a given platform can be taken for granted from day one. This eliminates a big business risk.

Kotlin’s winning strategy is the sum of the various factors that we have seen previously. It has a two-pronged strategy to win over the developers with the coolness of the language, and the ease of working with it, to win over business users with its business benefits. The following illustration shows us the different benefits of using Kotlin: 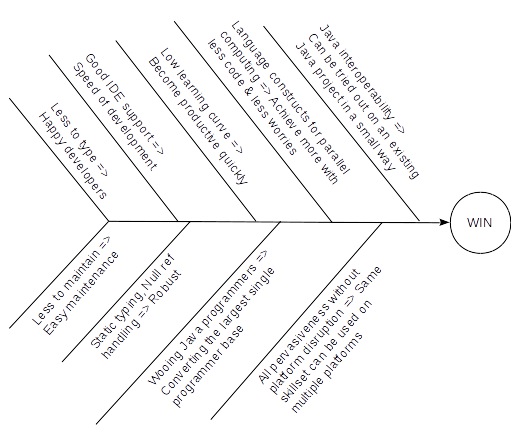 The other benefits also include:

With this in mind, the winning strategy for smart programmers is to master Kotlin and learn to work with Kotlin on various platforms. Being ahead of the curve as opposed to following the world after Kotlin is already big but it will be a quick path to being recognized as a leader. Further chapters of this book will help you in exactly this mission.

Apart from going through this book, we strongly suggest you join the community. Join the Kotlin weekly mailing list at http://kotlinweekly.net.

Join the nearest Kotlin user group at http://kotlinlang.org/community/user-groups.html. Kotlin’s community on Slack is at https://kotlinlang.slack.com/.

We saw how Kotlin is well positioned to take off as the universal programming language. It offers an opportunity for smart programmers to establish themselves at the forefront of this rising tide.

This article was taken from the book Kotlin Blueprints. If you liked reading this piece, check out the  book to build comprehensive applications using Kotlin features.

Getting started with Kotlin programming

How to convert Java code into Kotlin