The ‘Ice Lake’ processors are manufactured on Intel’s 10nm processor and consist of the 14nm chipset in the same carrier. It includes two or four Sunny Cove cores along with Intel’s Gen 11 Graphics processing unit (GPU). The 10nm measure of the processor indicates the size of the transistors used. The 10 nanometer miniscule length also shows the power of the transistor as it is considered that smaller the transistor, better is its power consumption.

Chris Walker, Intel corporate vice president and general manager of Mobility Client Platforms in the Client Computing Group says that “With broad-scale AI for the first time on PCs, an all-new graphics architecture, best-in-class Wi-Fi 6 (Gig+) and Thunderbolt 3 – all integrated onto the SoC, thanks to Intel’s 10nm process technology and architecture design – we’re opening the door to an entirely new range of experiences and innovations for the laptop.”

Intel was supposed to ship the 10nm processors, way back in 2016. Intel CEO Bob Swan says that the delay was due to the “company’s overly aggressive strategy for moving to its next node.”

Intel has also introduced a new processor number naming structure for the 10th generation ‘Ice Lake’ processors which indicates the generation and the level of graphics performance of the processor.

The 10th generation core processors are the first purpose-built processors for AI on laptops and 2 in 1s. They are built for modern AI-infused applications and contains many features such as:

With improved board integration, PC manufacturers can innovate on form factor for sleeker designs with Wi-Fi 6 (Gig+) connectivity and up to four Thunderbolt 3 ports. Intel claims this is the “fastest and most versatile USB-C connector available.”

In the first batch of 11 ‘Ice Lake’ processors, there are 6 Ice Lake U series and 5 Ice Lake Y series processors. Given below is the complete Ice Lake processors list. 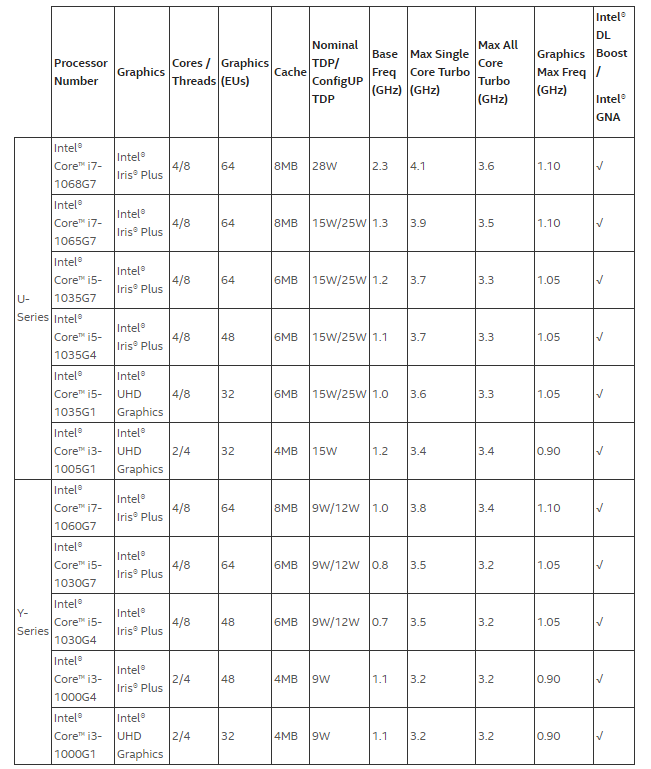 Intel has revealed that laptops with the 10th generation core processors can be expected in the holiday season this year. The post also states that they will soon release additional products in the 10th generation Intel core mobile processor family due to increased needs in computing. The upcoming processors will “deliver increased productivity and performance scaling for demanding, multithreaded workloads.”

It looks like the MacBook Air could be going quad-core and the 4-port MacBook Pro might be i7 only which would make a lot more sense.
Either way, the Gen 11 graphics and is efficiency gains are really exciting and hopefully rumours of the 6-core U-series i7 are true.

Many users are also expecting to see the new processors in the upcoming Mac notebooks.

Yeah, it seems like you should wait until 2020 for any Apple product. https://t.co/c714MHXpsp

Head over to the Intel newsroom page for more details.

Why Intel is betting on BFLOAT16 to be a game changer for deep learning training? Hint: Range trumps Precision.