Vulnerability scanners suffer the common shortcomings of all scanners (a scanner can only detect the signature of a known vulnerability; they cannot determine if the vulnerability can actually be exploited; there is a high incidence of false-positive reports). Furthermore, web vulnerability scanners cannot identify complex errors in business logic, and they do not accurately simulate the complex chained attacks used by hackers.

This tutorial is an excerpt taken from the book, Mastering Kali Linux for Advanced Penetration Testing – Second Edition written by Vijay Kumar Velu. In this book, we will be using a laboratory environment to validate tools and techniques, and using an application that supports a collaborative approach to penetration testing.

This article includes a list of web application vulnerability scanners and how we can implement them using Kali Linux.

In an effort to increase reliability, most penetration testers use multiple tools to scan web services; when multiple tools report that a particular vulnerability may exist, this consensus will direct the tester to areas that may require manually verifying the findings.

Kali comes with an extensive number of vulnerability scanners for web services and provides a stable platform for installing new scanners and extending their capabilities. This allows penetration testers to increase the effectiveness of testing by selecting scanning tools that:

Introduction to Nikto and Vega

Nikto is one of the most utilized active web application scanners that performs comprehensive tests against web servers. Basic functionality is to check for 6,700+ potentially dangerous files or programs, along with outdated versions of servers and vulnerabilities specific to versions over 270 servers; server mis-configuration, index files, HTTP methods, and also attempts to identify the installed web server and the software version. Nikto is released based on Open-General Public license versions (https://opensource.org/licenses/gpl-license).

A Perl-based open-source scanner allows IDS evasion and user changes to scan modules; however, this original web scanner is beginning to show its age, and is not as accurate as some of the more modern scanners.

Most testers start testing a website by using Nikto, a simple scanner (particularly with regards to reporting) that generally provides accurate but limited results; a sample output of this scan is shown in the following screenshot:

The next step is to use more advanced scanners that scan a larger number of vulnerabilities; in turn, they can take significantly longer to run to completion. It is not uncommon for complex vulnerability scans (as determined by the number of pages to be scanned as well as the site’s complexity, which can include multiple pages that permit user input such as search functions or forms that gather data from the user for a backend database) to take several days to be completed.

One of the most effective scanners based on the number of verified vulnerabilities discovered is Subgraph’s Vega. As shown in the following screenshot, it scans a target and classifies the vulnerabilities as high, medium, low, and informational. The tester is able to click on the identified results to drill down to specific findings. The tester can also modify the search modules, which are written in Java, to focus on particular vulnerabilities or identify new vulnerabilities: 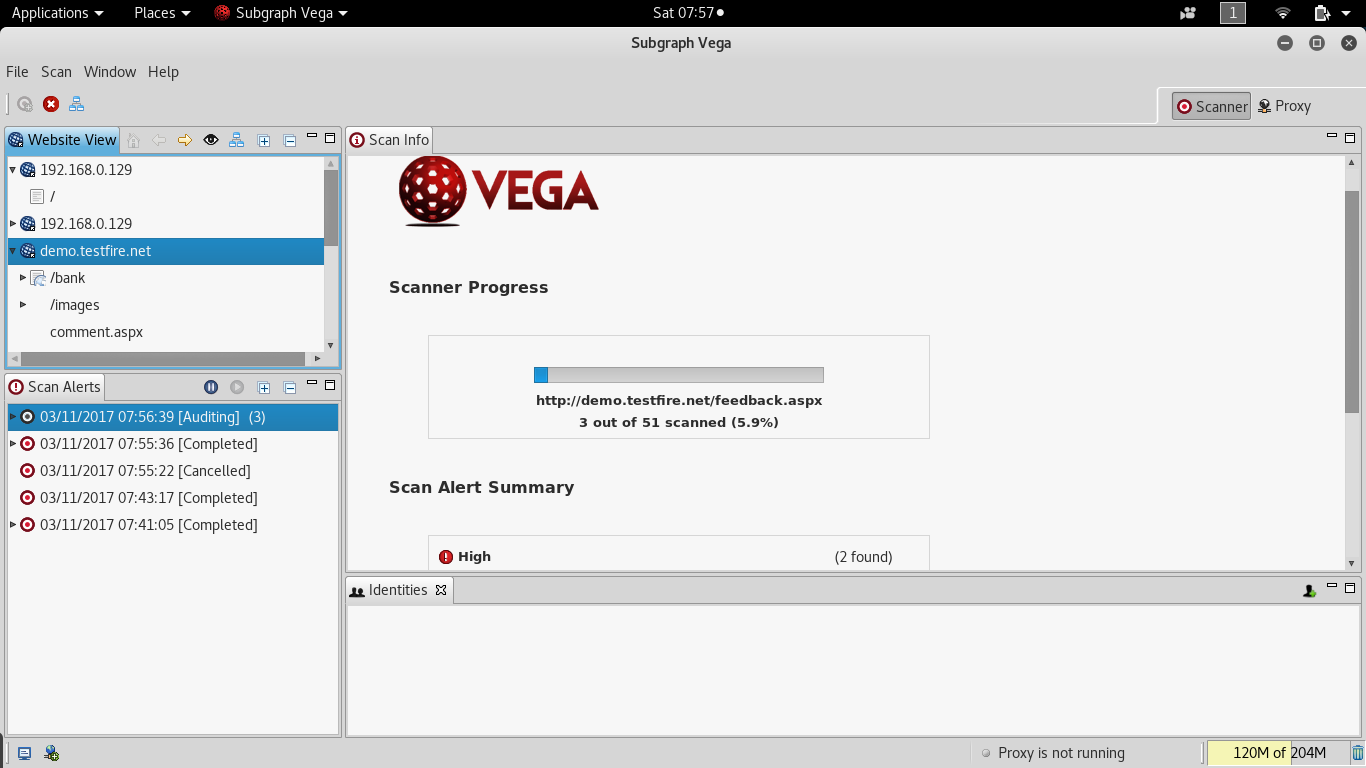 Also, Vega provides special features of Proxy section, which allows the penetration testers to query back the request and observe the response to perform the validation, which we call manual PoC. The following screenshot provides the proxy section of Vega: 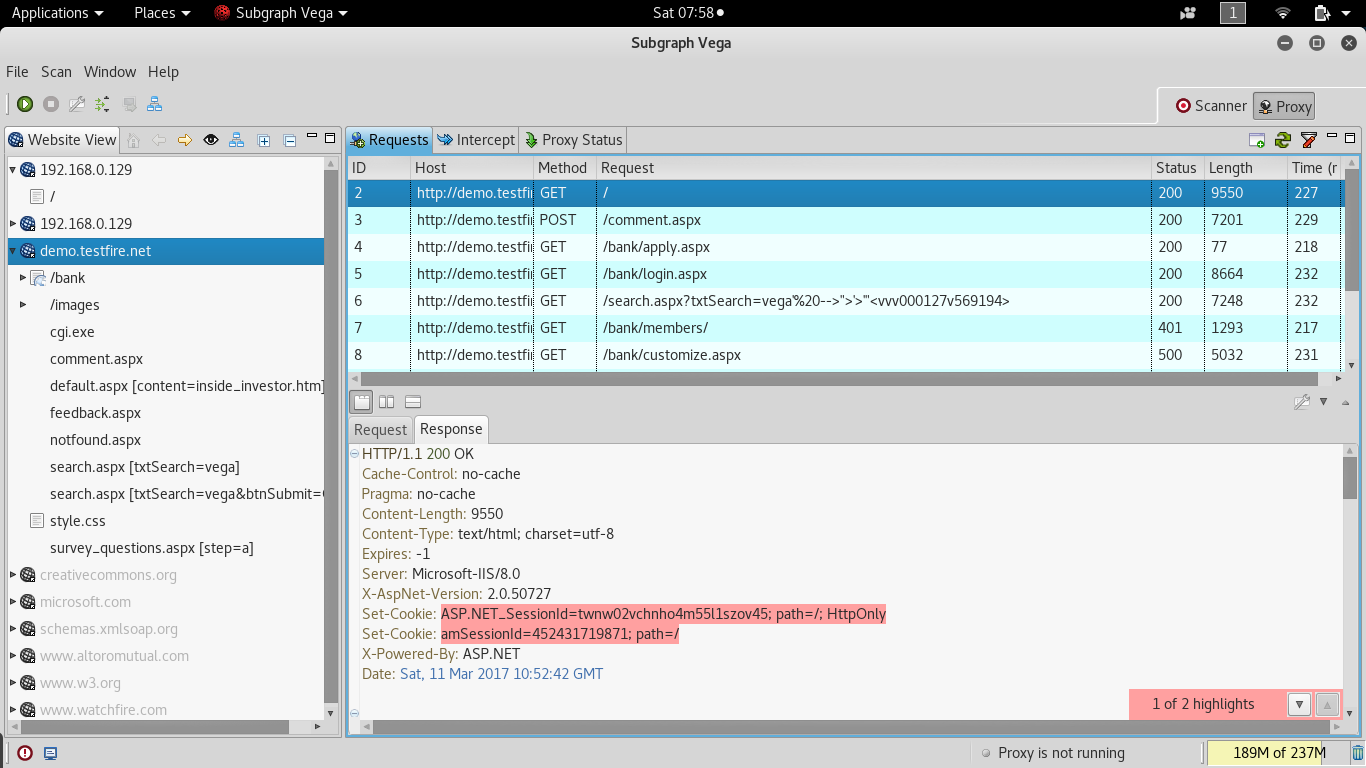 From Nikto version 2.1.1, the community allowed developers to debug and call specific plugins, the same can be customized accordingly from version 2.1.2, the listing can be done for all the plugins and then specify a specific plugin to perform any scan. 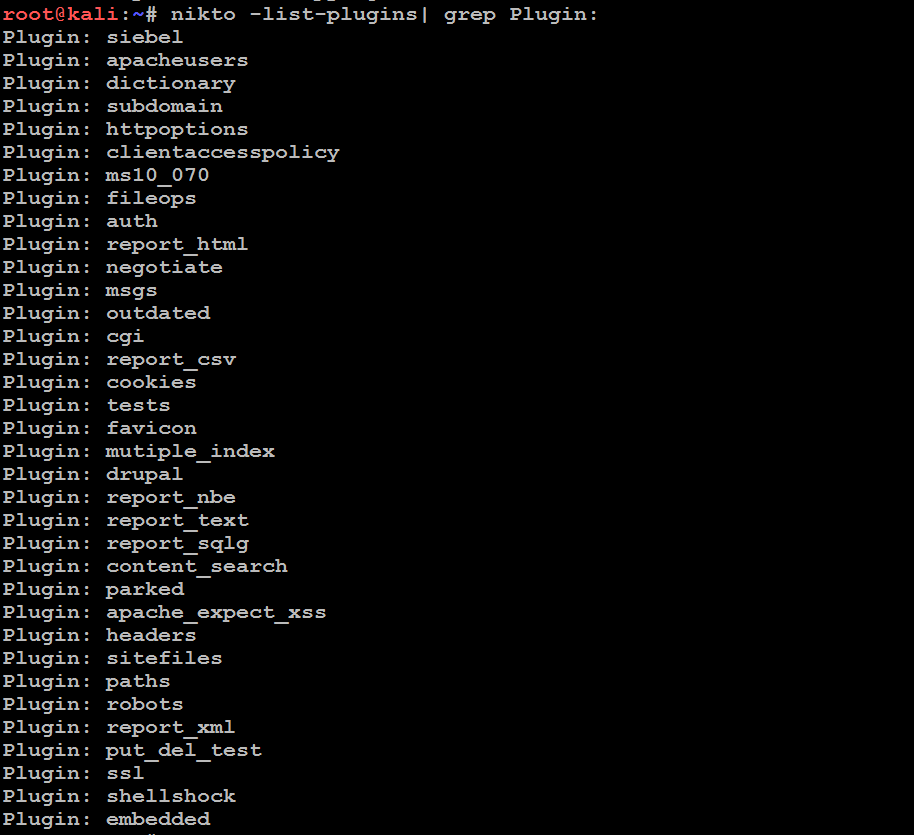 For example, if attackers found a banner information as Apache server 2.2.0 then the first point that Nikto scans to burp or any proxy tool by nikto.pl -host <hostaddress> -port <hostport> -useragentnikto -useproxy http://127.0.0.1:8080, Nikto can be customized to run specific plugins only for Apache user enumeration by running the following command:

Penetration testers should be able to see the following screenshot:

When the Nikto plugin is run successfully, the output file apacheusers.xml should include the active users on the target host.

Similar to Nikto, Vega also allows us to customize the scanner by navigating to the window and selecting Preferences whereby one can set up a general proxy configuration or even point the traffic to a third-party proxy tool. However, Vega has its own proxy tool that can be utilized. The following screenshot provides the scanner options that can be set before beginning any web application scan: 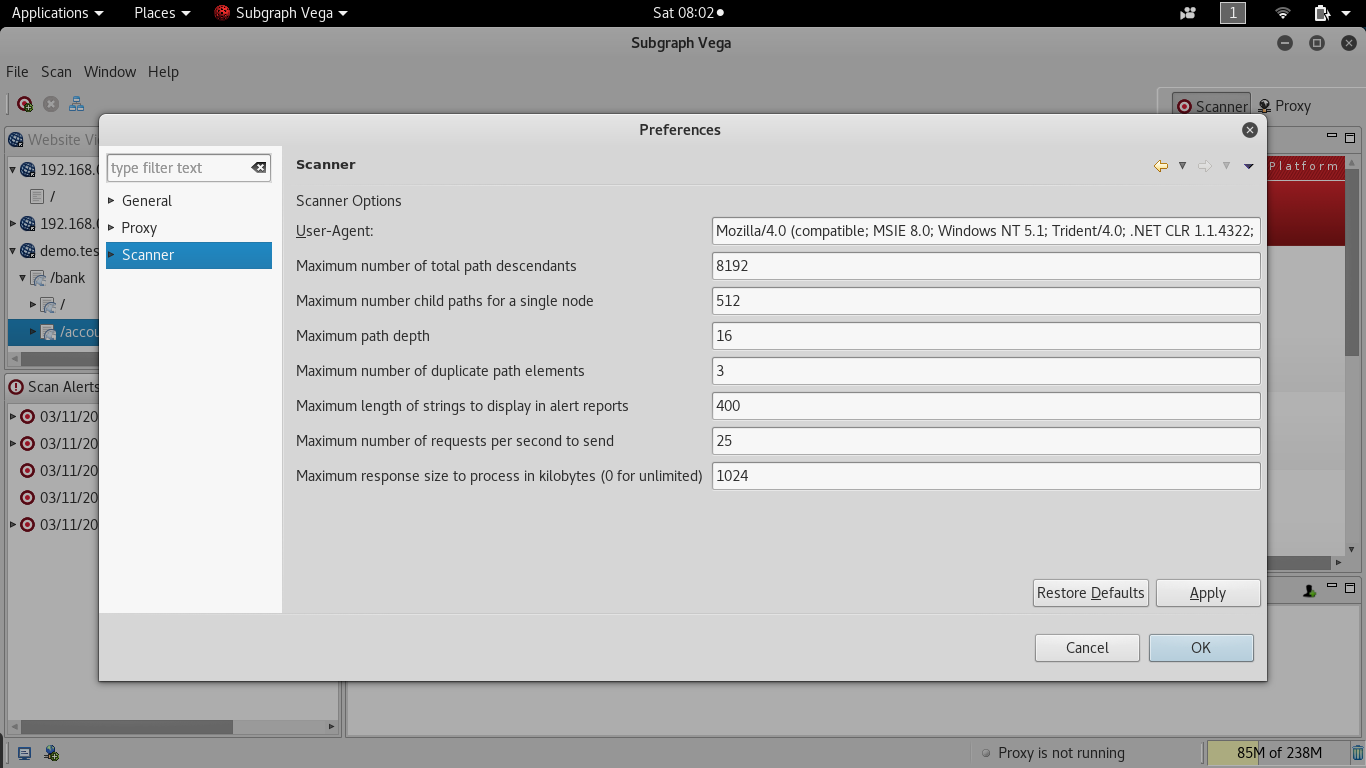 Attackers can define their own user agent or mimic any well-known user agents, such as IRC bot or Google bot and also configure the maximum number of total descendants and sub-processes, the number of paths that can be traversed. For example, if the spider reveals www.target.com/admin/, – there is a dictionary to add to the URL as www.target.com/admin/secret/. The maximum by default is set to 16, but attackers would be able to drill down by utilizing other tools to maximize the effectiveness of Vega and would select precisely the right number of paths and also, in the case of any protection mechanisms in place, such as WAF or network level IPS, pentesters can select to scan the target with a slow rate of connections per second to send to the target. One can also set the maximum number of responses size to be set, by default it is set: to 1 MB (1,024 kB). 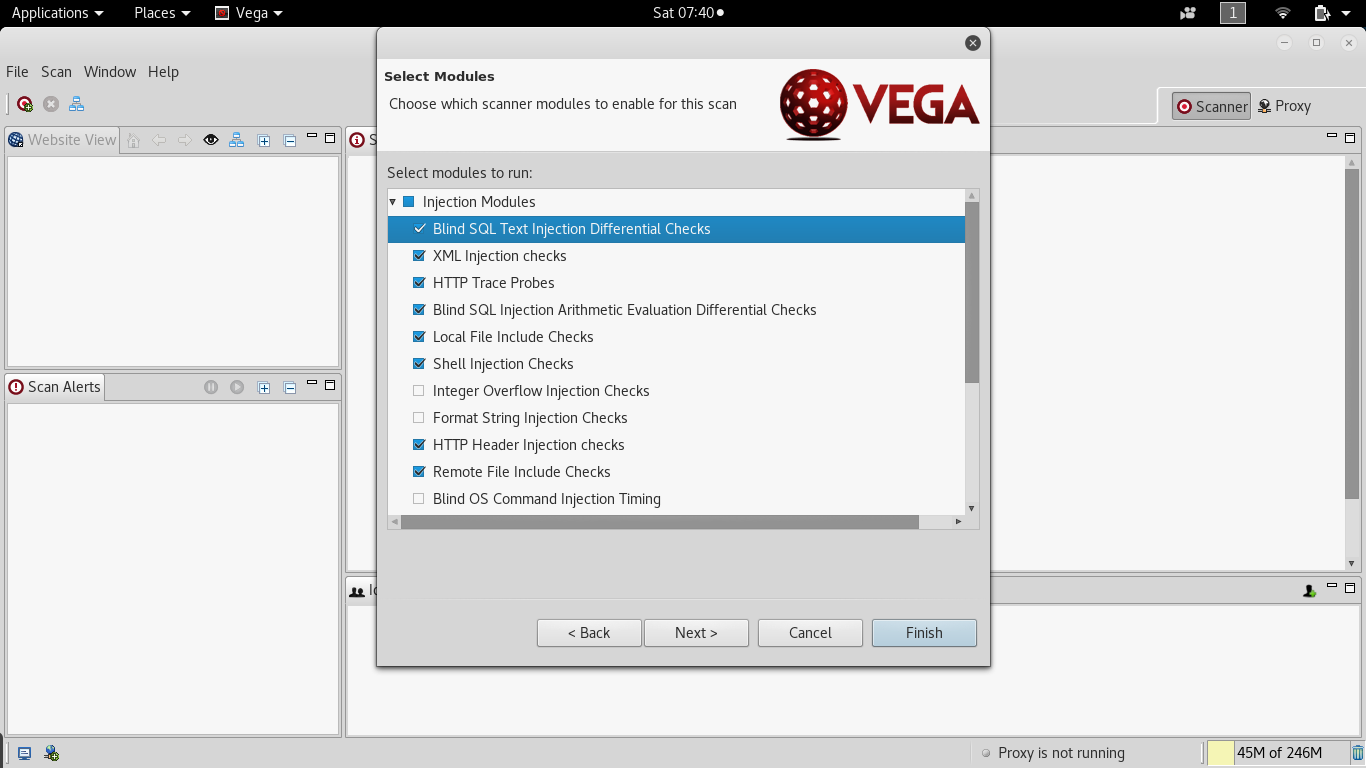 Vega provides two sections to customize: one is Injection modules and the other is Response processing modules:

To know about vulnerability scanners for mobile applications, head over to the book.

Open Vulnerability Assessment System (OpenVAS) is an open source vulnerability assessment scanner and also a vulnerability management tool often utilized by attackers to scan a wide range of networks, which includes around 47,000 vulnerabilities in its database; however, this can be considered as a slow network vulnerability scanner compared with other commercial tools, such as Nessus, nexpose, Qualys, and so on.

If OpenVAS is already not installed, make sure your Kali is up to date and install the latest OpenVAS by running the apt-get install Openvas command. Once done, run the openvas-setup command to setup OpenVAS. To make sure the installation is okay, the penetration testers can run the command openvas-check-setup and it will list down the top 10 items that are required to run OpenVAS effectively. Upon successful installation, testers should be able to see the following screenshot: 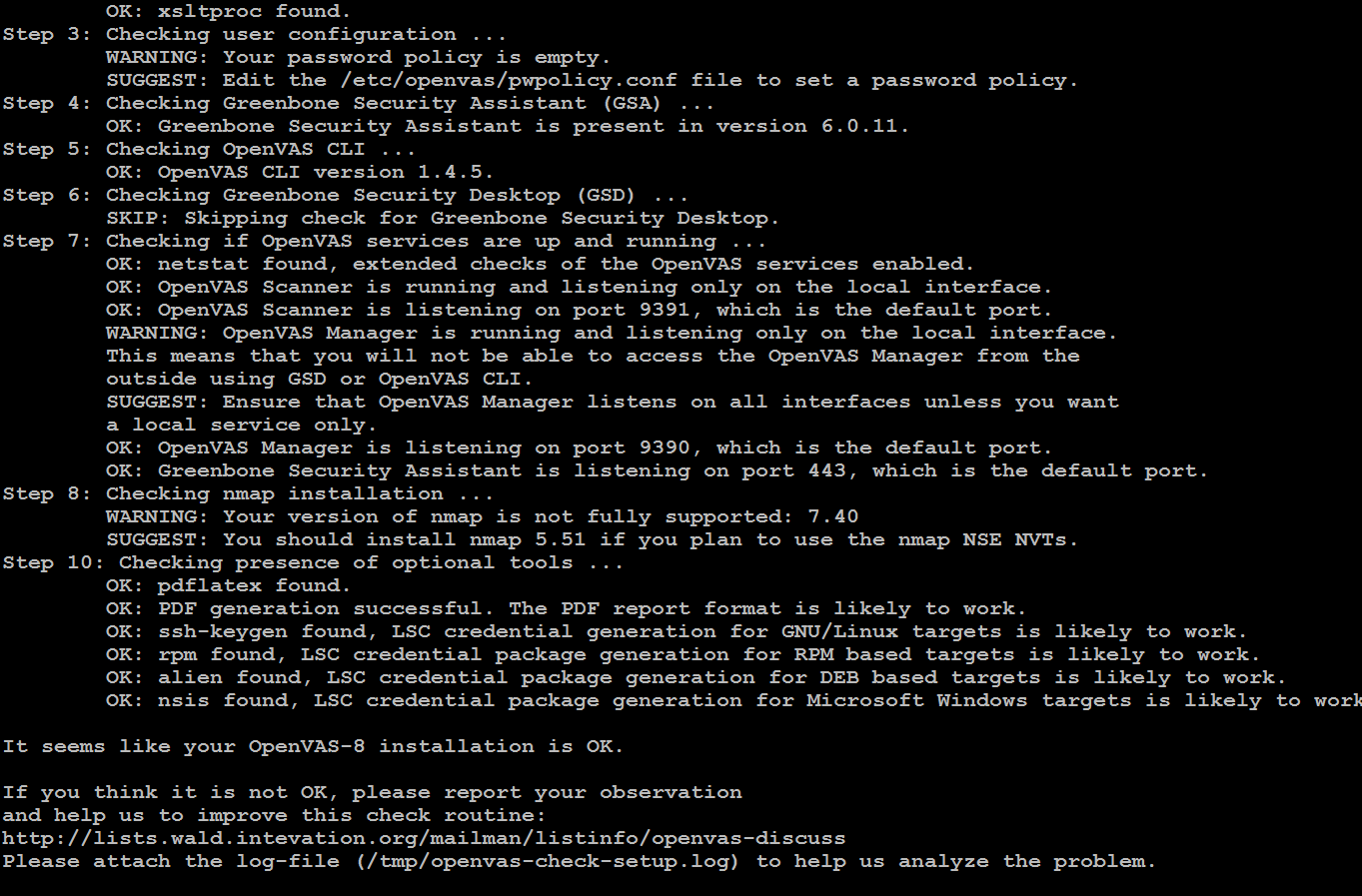 Next, create an admin user by running the openvasmd -user=admin -new-password=YourNewPassword1,-new-password=YourNewPassword1command, and start up the OpenVAS scanner and OpenVAS manager services by running the openvas-start command from the prompt. Depending on bandwidth and computer resources, this could take a while. Once the installation and update has been completed, penetration testers should be able to access the OpenVAS server on port 9392 with SSL (https://localhost:9392), as shown in the following screenshot: 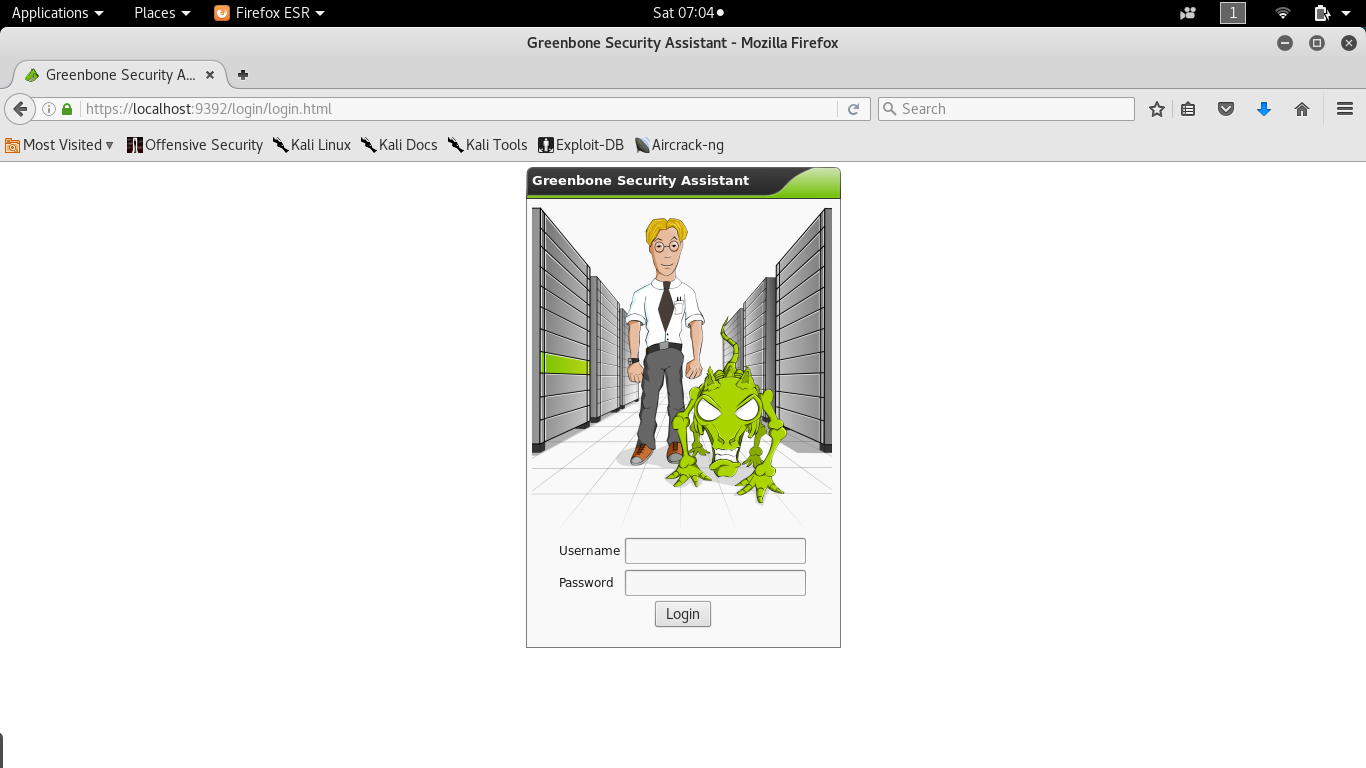 The next step is to validate the user credentials, by entering the username as admin and password with yournewpassword1 and testers should be able to login without any issues and see the following screenshot. Attackers are now set to utilize OpenVAS by entering the target information and clicking Start Scan from the scanner portal: 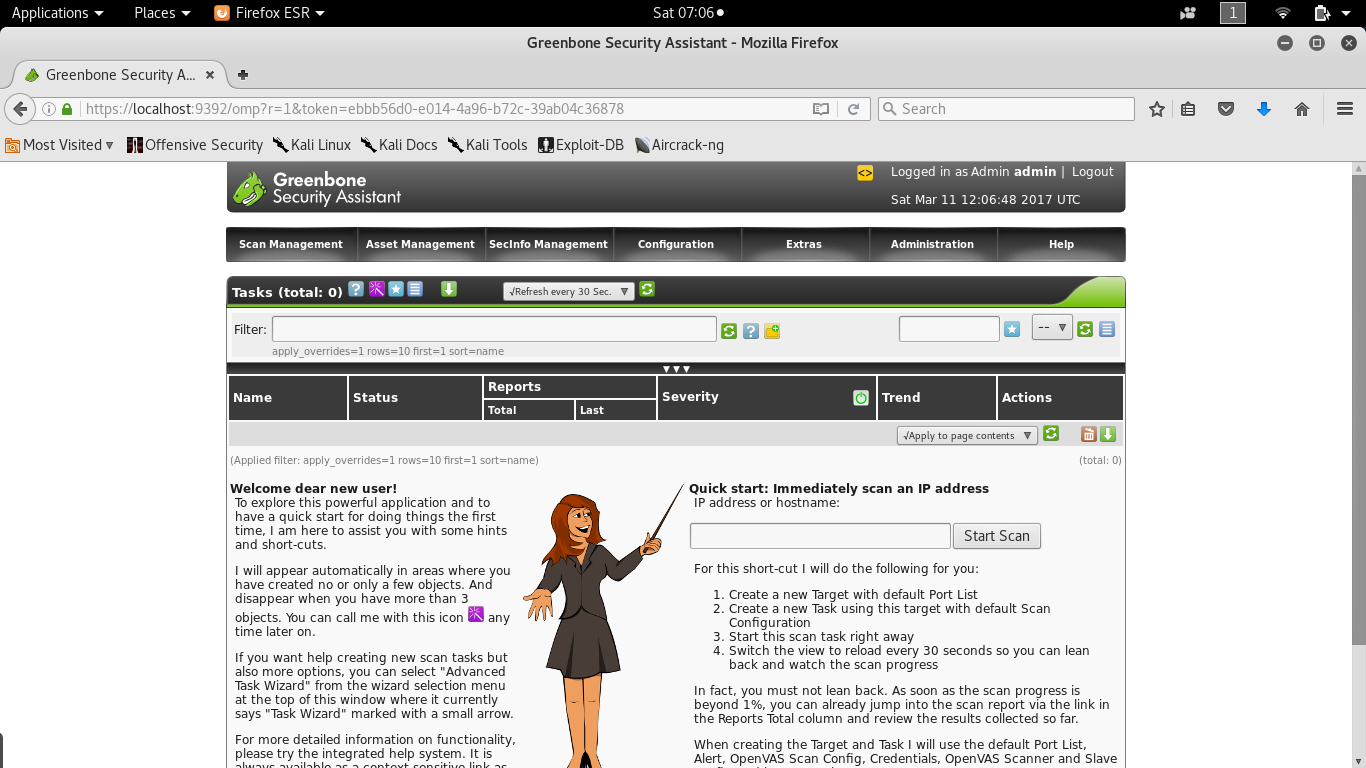 Unlike any other scanners, OpenVAS is also customizable for scan configuration, it allows the testers to add credentials, disable particular plugins, and set the maximum and minimum number of connections that can be made and so on.

The following sample screenshot shows the place where attackers are allowed to change all the required settings to customize it accordingly: 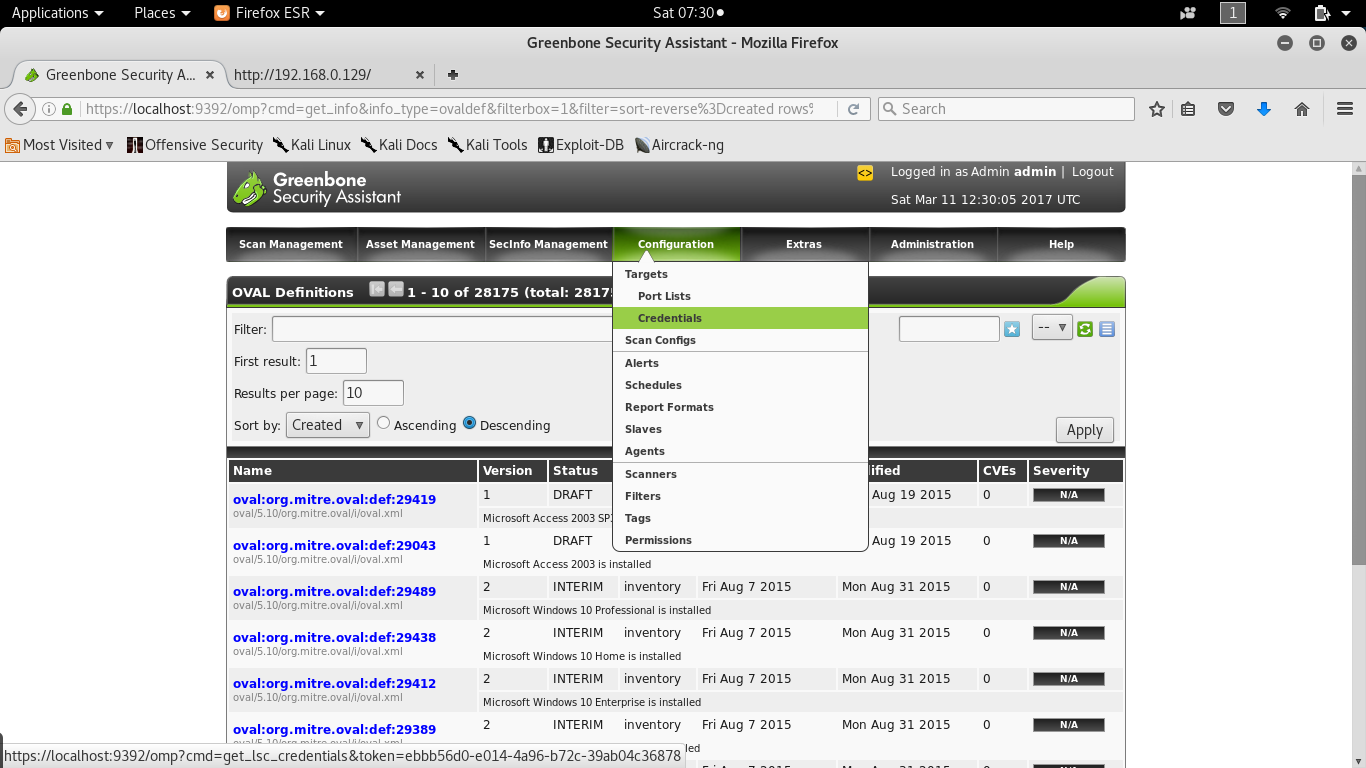 To summarize, in this article we focused on multiple vulnerability assessment tools and techniques implementation using Kali Linux. If you’ve enjoyed this post, do check out our book Mastering Kali Linux for Advanced Penetration Testing – Second Edition to explore approaches to carry out advanced penetration testing in tightly secured environments.

Getting Started with Metasploitable2 and Kali Linux