Background music and audio effects play a big role in determining any game’s success or failure. Creating engaging game audio, importing audio from other sources and working and customizing Audio FX clips as per the game flow is a vital task for any game developer.  In this article, we are going to discuss about how to create, customize and use third party audio in Unity games.

Basics of audio and sound FX in Unity

Adding sound in Unity is simple enough, but you can implement it better if you understand how sound travels. While this is extremely important in 3D games because of the added third dimension, it is quite important in 2D games, just in a slightly different way. Before we discuss the differences, let’s first learn about what and how sound works from a quick physics lesson.

Listening to the physics behind sound

What we hear is not just music, sound effects (FX) and ambient background noise. The sound is a longitudinal, mechanical (vibrating) wave. These “waves” can pass through different mediums (for example, air, water, your desk) but not through a vacuum. Therefore, no one will hear your screams in space. The sound is a variation in pressure. A region of increased pressure on a sound wave is called a compression (or condensation). A region of decreased pressure on a sound wave is called a rarefaction (or dilation). You can see this concept illustrated in the following image:

The density of certain materials, such as glass and plastic, allows a certain amount of light to pass through them. This will influence how the light will behave when it passes through them, such as bending/refracting (that is, the index of refraction), various materials (for example, liquids, solids, gases) have the same effect when it comes to allowing sound waves to pass. Some materials allow the sound to pass easily, while others dampen it. Therefore, sound studios/booths are made of certain materials to remove things such as echoes. It has a similar effect to when you scream underwater that there is a shark. It won’t be as loud as if you scream from your kitchen to tell everyone dinner is ready.

Another thing to consider is what is known as the Doppler Effect. The Doppler Effect results from an increase (or decrease) in the frequency of sound (and other things such as light, ripples in water) as the source of the sound and person/player move toward (or away from) each other. A simple example of this is when an emergency vehicle passes by you. You will notice that the sound of the siren is different before it reaches you when it is near you, and once it passes you. Considering this example, it is because there is a sudden change in pitch in the passing siren. This is visualized in the following image: 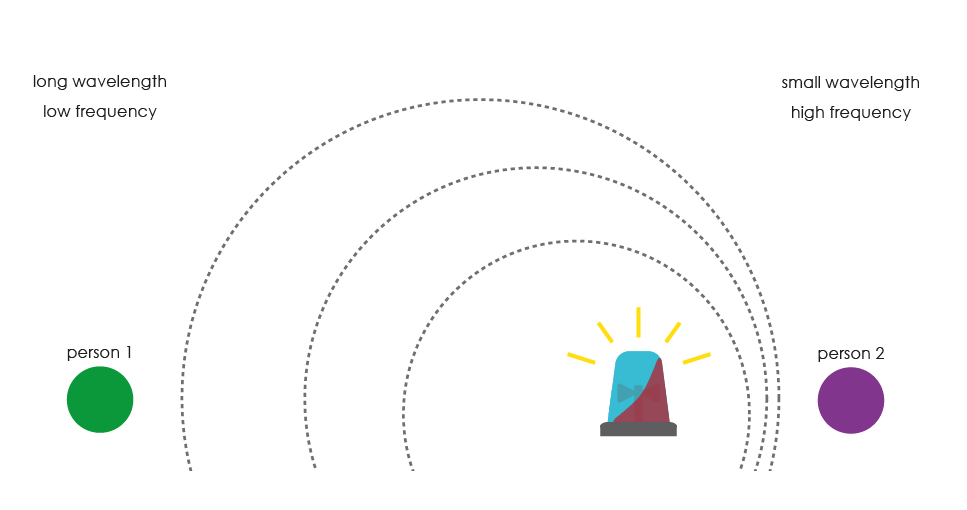 So, what is the point of knowing this when it comes to developing games? Well, this is particularly important when creating games, more so in 3D, in relation to how sounds are heard by players in many ways. For example, imagine that you’re nearing a creek, but there are dense bushes, large pine trees, and a rugged terrain.

The sound that creek makes from where a player is in the game world is going to sound very different if it was a completely flat plane free from any vegetation. When it comes to 2D games, this is not necessarily as important because we are working without depth (z-axis) but similar principles apply when players may be navigating around a top-down environment and they are near a point of interest. You don’t want that sound to be as loud when the player is far away as it would be if they were up close.

Within the context of 2D and 3D sounds, Unity has a parameter for this exact thing called Spatial Blend. We will discuss this more in the Audio Source section.

There are several ways that you can create audio within Unity, from importing your own/downloaded sounds to recording it live. Like images, Unity can import most standard audio file formats: AIFF, WAV, MP3, and Ogg, and tracker modules (for example, short instrument samples): .xm, .mod, .it, and .s3m.

Importing audio into Unity follows the same processes as importing any other type of asset. We will cover the basics of what you need to know in the following sections.

Have you heard the saying, If a tree falls in a forest and no one is there to hear it, does it still make a sound? Well, in Unity, if there is nothing to hear your audio, then the answer is no. This is because Unity has a component called an Audio Listener, which works like a microphone. To locate the Audio Listener, click the Main Camera, and then look over at the Inspector; it should be located near the bottom, like in the following image: 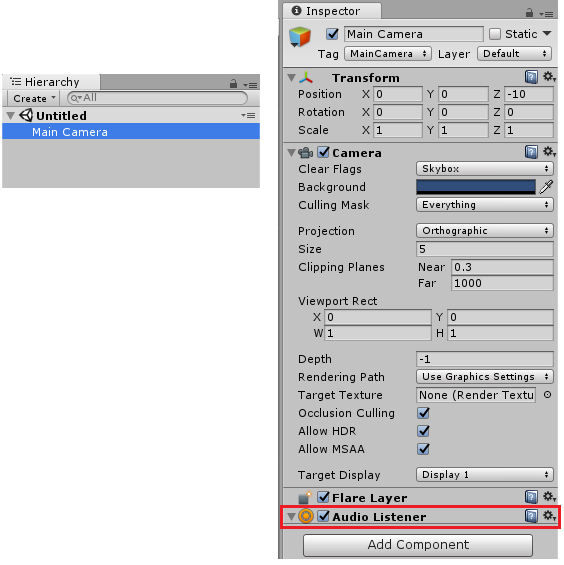 If for some reason, it isn’t there, you can always add it by clicking the following button titled Add Component, type Audio Listener, and select it (click it) from the list, like in the following image:

The important thing to remember is that an Audio Listener is the location of the sound, so it makes sense as to why it is typically placed on the Main Camera, but it can also be placed on a Player. A single scene can only have one Audio Listener; therefore, it’s best to experiment with the one that works best for your game.

It is important to remember that an Audio Listener works with an Audio Source, and must have one to work.

The Audio Source is where the sound comes from. This can be from many different objects within a Scene as well as background and sound FX. The Audio Source has several parameters; later we will briefly discuss the main ones.

To see more information about all the parameters, you can check out the official Unity documentation by visiting the link or scanning the QR code:

You may be wondering why we should have a slider for Spatial Blend, instead of a checkbox. This is because we need to fade between 2D and 3D, and there is a good reason for this. Imagine that you’re in a game and you’re looking at a screen on a computer. In this case, your camera is going to be fixated on whatever is on the screen. This could be checking an inventory or even entering nuclear codes. In any case, you will want the sound that is being emitted from the screen to be the focal audio. Therefore, the slider in the Spatial Blend parameter is going to be closer to 2D. This is because you may still want ambient noises that are in the background incorporated into the experience. So, if you are closer to 2D, the sound will be the same in both speakers (or headphones). The closer you slide toward 3D, the more the volume will depend on the proximity of the Sound Listener to the Sound Source. It will also allow for things, such as the Doppler Effect, to be more noticeable, as it takes in 3D space. There are also specific settings for these things.

Choosing sounds for background and FX

When it comes to picking the right kind of music for your game, just like the aesthetics, you need to think about what kind of “mood” you’re trying to create. Is it a somber or uplifting kind of mood, are you ironically contrasting the graphics (for example, happy) with gloomy music? There is really no right or wrong when it comes to your musical selection if you can communicate to the player what they are supposed to feel, at least in general.

For this game, I have provided you with some example “moods” that you can apply to this game. Of course, you’re welcome to choose sounds other than this that are more to your liking! All the sounds that we will use will be from the Free Sound website: https://freesound.org.

You will need to create an account to download them, but it’s free and there are many great sounds that you can use when creating games. In saying this, if you’re intending to create your games for commercial purposes, please make sure that you check the Terms and Conditions on Free Sound to make sure that you’re not violating any of them. Each track will have its own attribution licenses, including those for commercial use, so always check! For this project, we’re going to stick with the “Happy” version. But I encourage you to experiment!

Not everyone can hear well or at all, so it pays to keep this in mind when you’re developing games that may rely on audio to provide feedback to players. While subtitles can enable dialogue to be more accessible, sound FX can be a little trickier. Therefore, when it comes to implementing audio, think about how you could complement it, even if the same effect that you’re trying to achieve with sound is subtle.

For example, if you play a “bleep” for every item collected, perhaps you could associate it with a slight glow or flash of color. The choice is up to you, but it’s something to keep in mind. On the other end of the spectrum, those who can hear might also want to turn the sounds off. We’ve all played that game (or several) that really begins to become irritating, so make sure that you also check this while you’re playtesting. You don’t want an awesome game to suck because your audio is intolerable and there is not an option to TURN THE SOUND OFF! You’ve been warned.

Integrating background music in our game

Once you choose which music better suits the kind of feel you want to create for your game, import both the sound and the music inside the project. If you want, you can create two folders for them, SoundFX and Music, respectively.

Now, in our scene, we need to do the following:

In the end, this is how the component should look (in the image, I chose the happy theme music, and set a Volume of 0.1): 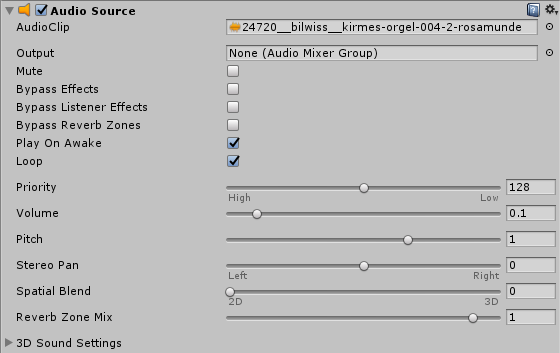 Here in this article we have shown you how to incorporate game audio effects and background music in Unity games. If you liked this article, then check out the complete book Unity 2017 2D Game Development Projects.