Predictive maintenance is a common value proposition cited for IoT analytics. In this tutorial will look at a value formula for net savings. Then we walk through an example as a way to highlight how to think financially about when it makes sense to implement a decision and when it does not.

The economics of predictive maintenance may not be entirely obvious. Believe it or not, it does not always make sense, even if you can predict early failures accurately. In many cases, you will actually lose money by doing it. Even when it can save you money, there is an optimal point for when it should be used. The optimal point depends on the costs and the accuracy of the predictive model.

This article is an excerpt from a book written by Andrew Minteer titled Analytics for the Internet of Things (IoT).

A formula to guide decision making compares the cost of allowing a failure to occur versus the cost to proactively repair the component while considering the probability of predicting the failure:

On the other hand, if the failure is a $400 USD automotive turbocharger replacement, and the proactive repair cost is $350 USD for a turbocharger actuator subcomponent replacement, the predictive model would need to be highly accurate for that to make financial sense.

An example of making a value decision

To illustrate the example, we will walk through a business situation and then some R code that simulates a cost-benefit curve for that decision. The code will use a fitted predictive model to calculate the net savings (or lack thereof) to generate a cost curve. The cost curve can then be used in a business decision on what proportion of units with predicted failures should have a proactive replacement.

Imagine you work for a company that builds diesel-powered generators. There is a coolant control valve that normally lasts for 4,000 hours of operation until there is a planned replacement. From the analysis, your company has realized that the generators built two years prior are experiencing an earlier than the expected failure of the valve.

When the valve fails, the engine overheats and several other components are damaged. The cost of failure, including labor rates for repair personnel and the cost to the customer for downtime, is an average of $1,000 USD. The cost of a proactive replacement of the valve is $253 USD.

Should you replace all coolant valves in the population? It depends on how high a failure rate is expected. In this case, about 10% of the current non-failed units are expected to fail before the scheduled replacement. Also, importantly, it matters how well you can predict the failures.

The following R code simulates this situation and uses a simple predictive model (logistic regression) to estimate a cost curve. The model has an AUC of close to 0.75. This will vary as you run the code since the dataset is randomly simulated:

#Assign costs for failures and proactive repairs
proactive_repair_cost <- 253 # Cost of proactively repairing a part
failure_repair_cost <- 1000 # Cost of a failure of the part (include all costs such as lost production, etc not just the repair cost)

#use the simulated model. In practice, this code can be adapted to compare multiple models
test_model <- simModel

# Create new object to house the one row per iteration output for the final plot
master[[i]] <- test_model[nrow(test_model),]

# Reduce the threshold by 1% and repeat to calculate new value
threshold <- threshold – 0.01
}

As seen in the resulting net cost and savings curves, based on the model’s predictions, the optimal savings would be from a proactive repair program of the top 30 percentile units. The savings decreases after this, although you would still save money when replacing up to 75% of the population. After this point, you should expect to spend more than you save. The following set of charts is the output from the preceding code: 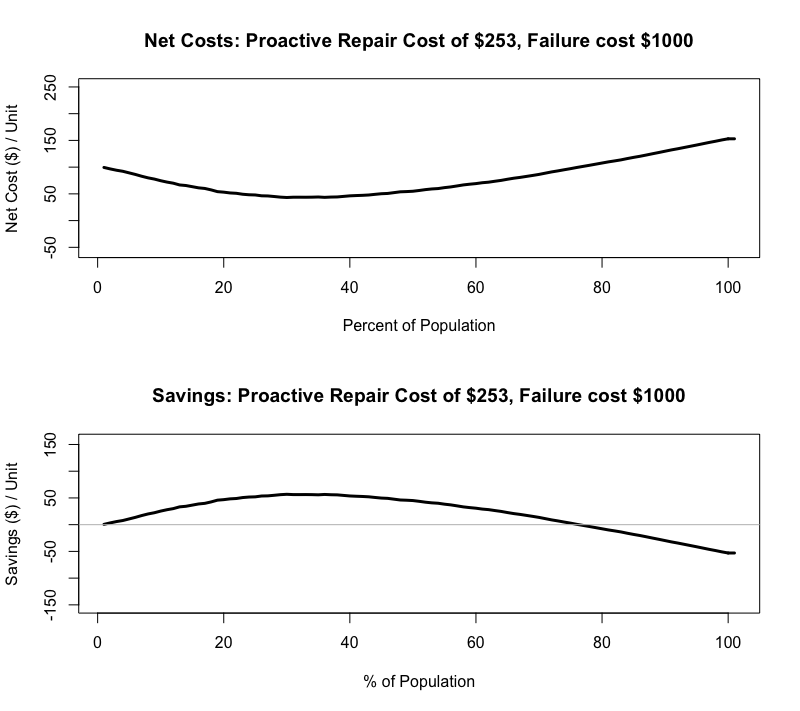 Cost and savings curves for the proactive repair $253 and failure cost at $1,000 scenario

Note the changes in the following graph when the failure cost drops to $300 USD. At no point do you save money, as the proactive repair cost will always outweigh the reduced failure cost. This does not mean you should not do a proactive repair; you may still want to do so in order to satisfy your customers. Even in such a case, this cost curve method can help in decisions on how much you are willing to spend to address the problem. You can rerun the code with proactive_repair_cost set to 253 and failure_repair_cost set to 300 to generate the following charts: 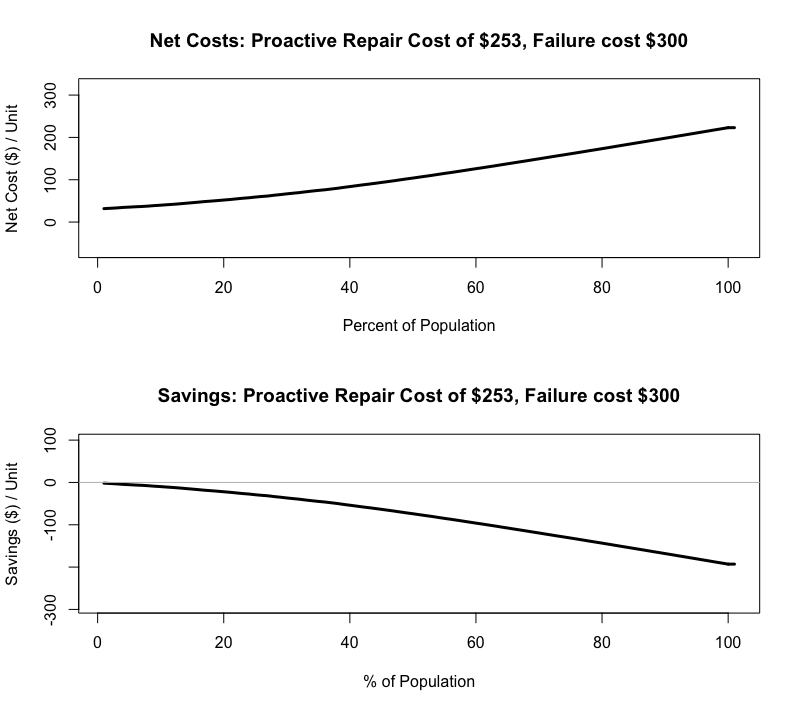 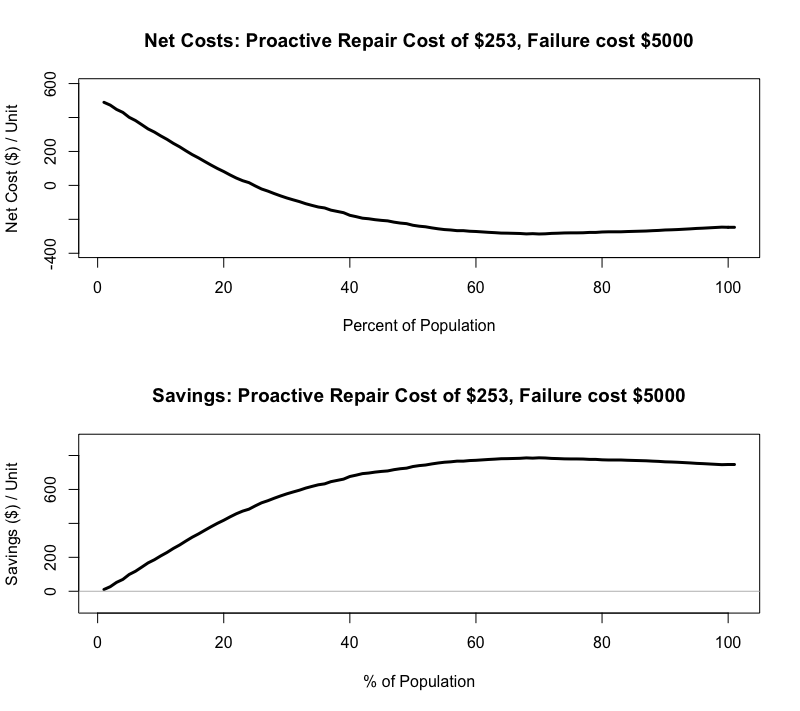 Cost and savings curves for the proactive repair $253 and failure cost at $5,000 scenario

In this tutorial, we looked at implementing economically cost effective IoT analytics for predictive maintenance with example.  To further explore IoT Analytics and cloud check out the book Analytics for the Internet of Things (IoT).