The most basic Continuous Integration process is called a commit pipeline. This classic phase, as its name says, starts with a commit (or push in Git) to the main repository and results in a report about the build success or failure. Since it runs after each change in the code, the build should take no more than 5 minutes and should consume a reasonable amount of resources.

This tutorial is an excerpt taken from the book, Continuous Delivery with Docker and Jenkins written by Rafał Leszko. This book provides steps to build applications on Docker files and integrate them with Jenkins using continuous delivery processes such as continuous integration, automated acceptance testing, and configuration management. In this article, you will learn how to create Continuous Integration commit pipeline using Docker.

The commit phase is always the starting point of the Continuous Delivery process, and it provides the most important feedback cycle in the development process, constant information if the code is in a healthy state.  A developer checks in the code to the repository, the Continuous Integration server detects the change, and the build starts. The most fundamental commit pipeline contains three stages:

Let’s create a sample project and see how to implement the commit pipeline.

This is an example of a pipeline for the project that uses technologies such as Git, Java, Gradle, and Spring Boot. Nevertheless, the same principles apply to any other technology.

Checking out code from the repository is always the first operation in any pipeline. In order to see this, we need to have a repository. Then, we will be able to create a pipeline.

Creating a repository on the GitHub server takes just a few steps:

Now, you should see the address of the repository, for example, https://github.com/leszko/calculator.git.

We can create a new pipeline called calculator and, as Pipeline script, put the code with a stage called Checkout:

The pipeline can be executed on any of the agents, and its only step does nothing more than downloading code from the repository. We can click on Build Now and see if it was executed successfully.

Note that the Git toolkit needs to be installed on the node where the build is executed.

When we have the checkout, we’re ready for the second stage.

In order to compile a project, we need to:

Spring Boot is a Java framework that simplifies building enterprise applications. Gradle is a build automation system that is based on the concepts of Apache Maven.

The simplest way to create a Spring Boot project is to perform the following steps: 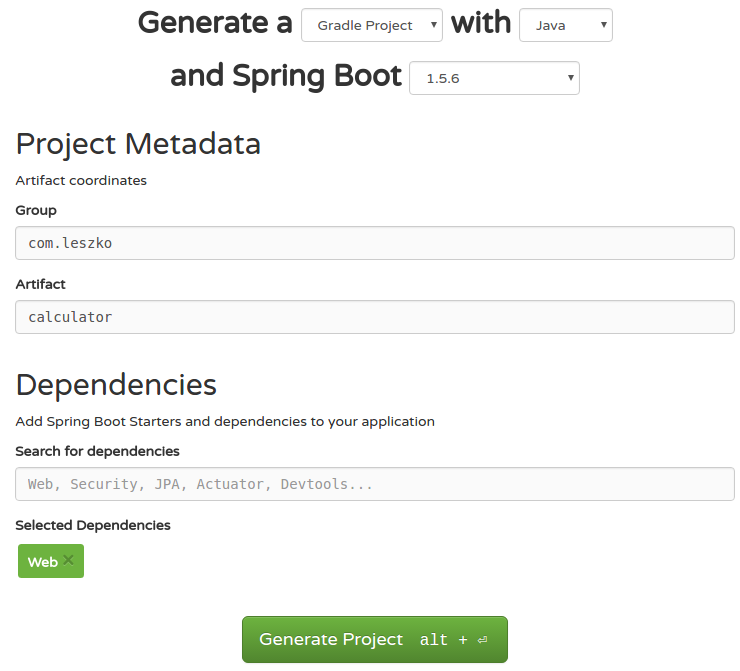 We will use the Git tool to perform the commit and push operations:

In order to run the git command, you need to have the Git toolkit installed (it can be downloaded from https://git-scm.com/downloads).

Let’s first clone the repository to the filesystem:

Extract the project downloaded from http://start.spring.io/ into the directory created by Git.

If you prefer, you can import the project into IntelliJ, Eclipse, or your favorite IDE tool.

As a result, the calculator directory should have the following files:

In order to perform the Gradle operations locally, you need to have Java JDK installed (in Ubuntu, you can do it by executing sudo apt-get install -y default-jdk).

We can compile the project locally using the following code:

In the case of Maven, you can run ./mvnw compile. Both Gradle and Maven compile the Java classes located in the src directory.

You can find all possible Gradle instructions (for the Java project) at https://docs.gradle.org/current/userguide/java_plugin.html.

Now, we can commit and push to the GitHub repository:

After running the git push command, you will be prompted to enter the GitHub credentials (username and password).

The code is already in the GitHub repository. If you want to check it, you can go to the GitHub page and see the files.

We can add a Compile stage to the pipeline using the following code:

Note that we used exactly the same command locally and in the Jenkins pipeline, which is a very good sign because the local development process is consistent with the Continuous Integration environment. After running the build, you should see two green boxes. You can also check that the project was compiled correctly in the console log.

It’s time to add the last stage that is Unit test, which checks if our code does what we expect it to do. We have to:

The first version of the calculator will be able to add two numbers. Let’s add the business logic as a class in the src/main/java/com/leszko/calculator/Calculator.java file:

To execute the business logic, we also need to add the web service controller in a separate file src/main/java/com/leszko/calculator/CalculatorController.java:

This class exposes the business logic as a web service. We can run the application and see how it works:

It should start our web service and we can check that it works by navigating to the browser and opening the page http://localhost:8080/sum?a=1&b=2. This should sum two numbers ( 1 and 2) and show 3 in the browser.

We already have the working application. How can we ensure that the logic works as expected? We have tried it once, but in order to know constantly, we need a unit test. In our case, it will be trivial, maybe even unnecessary; however, in real projects, unit tests can save from bugs and system failures.

Let’s create a unit test in the file src/test/java/com/leszko/calculator/CalculatorTest.java:

We can run the test locally using the ./gradlew test command. Then, let’s commit the code and push it to the repository:

Now, we can add a Unit test stage to the pipeline:

In the case of Maven, we would have to use ./mvnw test.

When we build the pipeline again, we should see three boxes, which means that we’ve completed the Continuous Integration pipeline:

Placing the pipeline definition inside Jenkinsfile

All the time, so far, we created the pipeline code directly in Jenkins. This is, however, not the only option. We can also put the pipeline definition inside a file called Jenkinsfile and commit it to the repository together with the source code. This method is even more consistent because the way your pipeline looks is strictly related to the project itself.

For example, if you don’t need the code compilation because your programming language is interpreted (and not compiled), then you won’t have the Compile stage. The tools you use also differ depending on the environment. We used Gradle/Maven because we’ve built the Java project; however, in the case of a project written in Python, you could use PyBuilder. It leads to the idea that the pipelines should be created by the same people who write the code, developers. Also, the pipeline definition should be put together with the code, in the repository.

We can create the Jenkinsfile and push it to our GitHub repository. Its content is almost the same as the commit pipeline we wrote. The only difference is that the checkout stage becomes redundant because Jenkins has to checkout the code (together with Jenkinsfile) first and then read the pipeline structure (from Jenkinsfile). This is why Jenkins needs to know the repository address before it reads Jenkinsfile.

Let’s create a file called Jenkinsfile in the root directory of our project:

We can now commit the added files and push to the GitHub repository:

When Jenkinsfile is in the repository, then all we have to do is to open the pipeline configuration and in the Pipeline section: 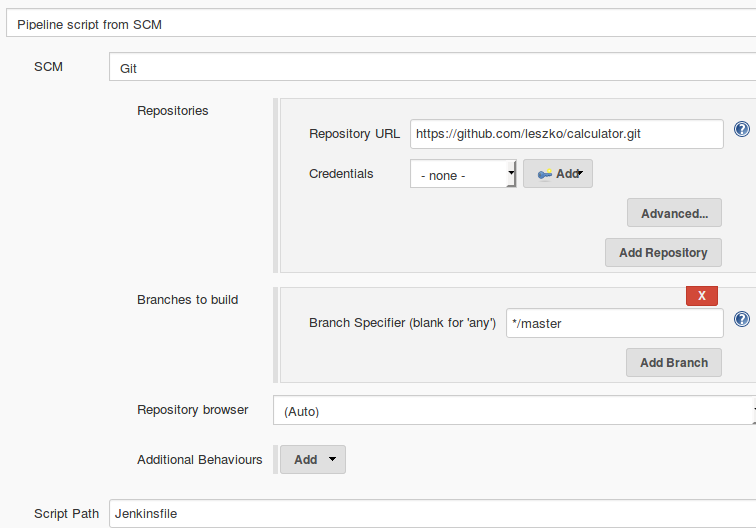 After saving, the build will always run from the current version of Jenkinsfile into the repository.

We have successfully created the first complete commit pipeline. It can be treated as a minimum viable product, and actually, in many cases, it’s sufficient as the Continuous Integration process. In the next sections, we will see what improvements can be done to make the commit pipeline even better.

To summarize, we covered some aspects of the Continuous Integration pipeline, which is always the first step for Continuous Delivery. If you’ve enjoyed reading this post, do check out the book,  Continuous Delivery with Docker and Jenkins to know more on how to deploy applications using Docker images and testing them with Jenkins.

Is your Enterprise Measuring the Right DevOps Metrics?