In this article, we understand the Markov model for forecasting and budgeting in finance.

This article is an excerpt from a book written by Harish Gulati titled SAS for Finance.

While a few decades ago, retail banks primarily made profits by leveraging their treasury office, recent years have seen fee income become a major source of profitability. Accepting deposits from customers and lending to other customers is one of the core functions of the treasury. However, charging for current or savings accounts with add-on facilities such as breakdown cover, mobile, and other insurances, and so on, has become a lucrative avenue for banks. One retail bank has a plain vanilla classic bank account, mid-tier premier, and a top-of-the-range, benefits included a platinum account.

The classic account is offered free and the premier and platinum have fees of $10 and $20 per month respectively. The marketing team has just relaunched the fee-based accounts with added benefits. The finance team wanted a projection of how much revenue could be generated via the premier and the platinum accounts.

Even though we have three types of account, the classic, premier, and the platinum, it doesn’t mean that we are only going to have nine transition types possible as in Figure 4.1. There are customers who will upgrade, but also others who may downgrade. There could also be some customers who leave the bank and at the same time there will be a constant inflow of new customers. Let’s evaluate the transition states flow for our business problem:

They may achieve some merit in this approach, as the managers may be able to incorporate the various factors that may have influenced the customer movements between states. A promotion offering 40% off the platinum account (effective rate $12/month, down from $20/month) may have ensured that more customers in the promotion period opted for the platinum account than the premier offering ($10/month).

Let’s examine the historical data of customer account preferences. The data is compiled for the years 2008 – 2018. This doesn’t account for any new customers joining after January 1, 2008 and also ignores information on churned customers in the period of interest.

Figure 4.3 consists of customers who have been with the bank since 2008:

Since we are only considering active customers, and no new customers are joining or leaving the bank, we can calculate the number of customers moving from one state to another using the data in Figure 4.3:

However, 0.4 million customers moved away to premium and platinum accounts. The total customers remain constant at 37.92 million as we have ignored new customers joining and any customers who have left the bank. From this table, we can calculate the transition probabilities for each state:

Using these details, we can compute the average transition between states across the time series. These averages can be used as the transition probabilities that will be used in the transition matrix for the model:

The probability of classic customers retaining the same account type between semiannual time periods is 98.2%. The lowest retain probability is for platinum customers as they are expected to transition to another customer account type 26.7% of the time. Let’s use the transition matrix in Figure 4.6 to run our Markov model.

Use this code for Data setup:

In the current data set, we have chosen the last available data point, 2017 H2. This is the base position of customer counts across classic, premium, and platinum accounts. While calculating the transition matrix, we haven’t taken into account new joiners or leavers. However, to enable forecasting we have taken 2017 H2 as our base position. The transition matrix seen in Figure 4.6 has been input as a separate dataset.

The Markov model has been run and we are able to generate forecasts for all account types for the requested five periods. We can immediately see that there is an increase forecasted for all the account types. This is being driven by the net flow of customers. We have derived the forecasts by essentially using the following equation:

Now, since we have our forecasts let’s take a step back and revisit our business goals. The finance team wants to estimate the revenues from the revamped premium and platinum customer accounts for the next few forecasting periods. As we have seen, one of the important drivers of the forecasting process is the transition probability. This transition probability is driven by historical customer movements, as shown in Figure 4.4.

What if the marketing team doesn’t agree with the transitional probabilities calculated in Figure 4.6? As we discussed, 26.7% of platinum customers aren’t retained in this account type. Since we are not considering customer churn out of the bank, this means that a large proportion of platinum customers downgrade their accounts. One of the reasons the marketing teams revamped the accounts is due to this reason.

The marketing team feels that it will be able to raise the retention rates for platinum customers and want the finance team to run an alternate forecasting scenario. This is, in fact, one of the pros of the Markov model approach as by tweaking the transition probabilities we can run various business scenarios. Let’s compare the base and the alternate scenario forecasts generated in Figure 4.8: 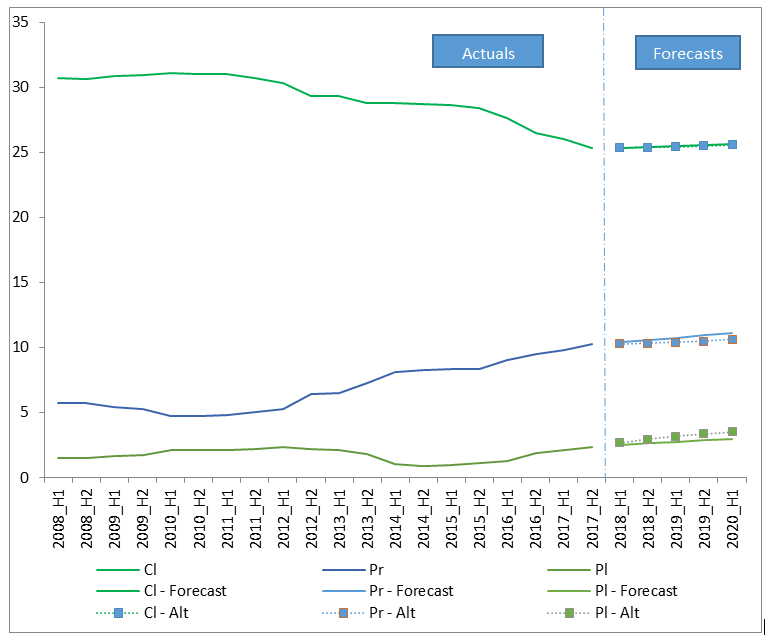 To summarize, we learned the Markov model methodology and learned Markov models for forecasting and imputation.

To know more about how to use the other two methodologies such as ARIMA and MCMC for generating forecasts for various business problems, you can check out the book SAS for Finance.