In 2011, Bootstrap was created by two Twitter employees (Mark Otto and Jacob Thornton) to address the issue of fragmentation of internal tools/platforms. Bootstrap aimed to provide consistency among different web applications that were internally developed at Twitter to reduce redundancy and increase adaptability and reusability.

As digital creators, we should always aim to make our applications adaptable and reusable. This will help keep coherency between applications and speed up processes, as we won’t need to create basic foundations over and over again. In today’s tutorial, you will learn what a Bootstrap is, how it relates to Responsive Web Design and its importance to the web industry.

When Twitter Blueprint was born, it provided a way to document and share common design patterns/assets within Twitter. This alone is an amazing feature that would make Bootstrap an extremely useful framework. With this more internal developers began contributing towards the Bootstrap project as part of Hackathon week, and the project just exploded. Not long after, it was renamed “Bootstrap” as we know and love it today, and was released as an open source project to the community. A core team led by Mark and Jacob along with a passionate and growing community of developers helped to accelerate the growth of Bootstrap.

In early 2012 after a lot of contributions from the core team and the community, Bootstrap 2 was born. It had come a long way from being a framework for providing internal consistency among Twitter tools. It was now a responsive framework using a 12-column grid system. It also provided inbuilt support for Glyphicons and a plethora of other new components.

In 2013, Bootstrap 3 was released with a mobile-first approach to design and a fully redesigned set of components using the immensely popular flat design. This is the version many websites use today and it is very suitable for most developers. Bootstrap 4 is the latest stable  release.

This article is an excerpt taken from the book,’ Responsive Web Design by Example‘, written by Frahaan Hussain.

You probably have a reasonable idea of why you would use Bootstrap for developing websites after reading its history, but there is more to it. Simply put, it provides the following:

It’s pretty clear now that Bootstrap is an amazing framework and that it will help provide consistency among our projects and aid cross browser responsive design. But why use Bootstrap over other frameworks? There are endless responsive frameworks like Bootstrap out there, such as Foundation, W3.CSS, and Skeleton, to mention a few.

Bootstrap, however, was one of the first responsive frameworks and is by far the most developed with an ever-growing community. It has documentation online, both official and unofficial, and other frameworks aren’t able to boast about their resources as much as Bootstrap can. Constantly being updated, it makes it the right choice for any website developer.

Also, most JavaScript frameworks, such as Angular and React, have bindings to Bootstrap components that will reduce the amount of code and time spent binding it with another framework. It can also be used with tools such as SASS to customize  the components provided further.

First, let’s cover what a grid system is in general, regardless of the framework you choose to develop your amazing website on top of. Without using a framework, CSS would be used to implement the grid. However, a framework like Bootstrap handles all of the CSS side and provides us with easy-to-use classes. A responsive grid system is composed of two main elements:

Your website will have at least one row, but it can have more. Each row can contain containers that span a set number of columns. For example, if the grid system had 100 columns, then a container that spans 50 would be half the width of the browser and/or parent element. 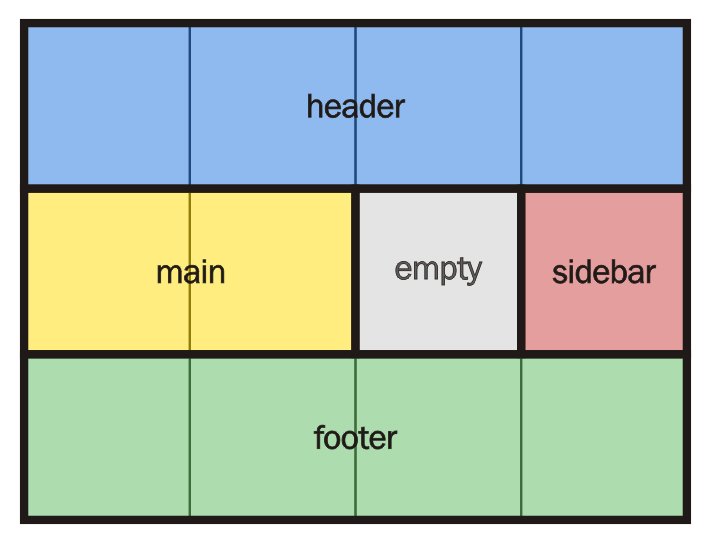 Bootstrap’s grid system consists of 12 columns that can be used to display content. Bootstrap also uses containers (methods for storing the website’s content), rows, and columns to aid in the layout and alignment of the web page’s content. All of these employ HTML classes for usage and will be explained very shortly. The purpose of these are as follows:

To set a column’s width, we simply append an integer ranging from 1 to 12 at the end of the class, like so:

Later in this chapter, we will run through some examples of how to use these features and how they work together.

To use the aforementioned features, the structure is as follows:

The following examples may have some CSS styling applied; this does not affect their usage.

We will start off with a simple example that consists of one row and three equal columns on all screen sizes. 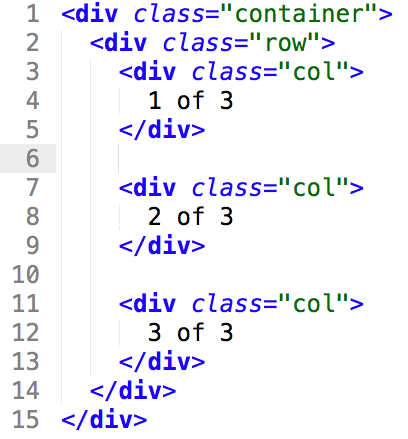 You may be scratching your head in regards to the column classes, as they have no numbers appended. This is an amazing feature that will come in useful very often. It allows us, as web developers, to add columns easily, without having to update the numbers, if the width of the columns is equal. In this example, there are three columns, which means the three divs equally span their thirds of the row. 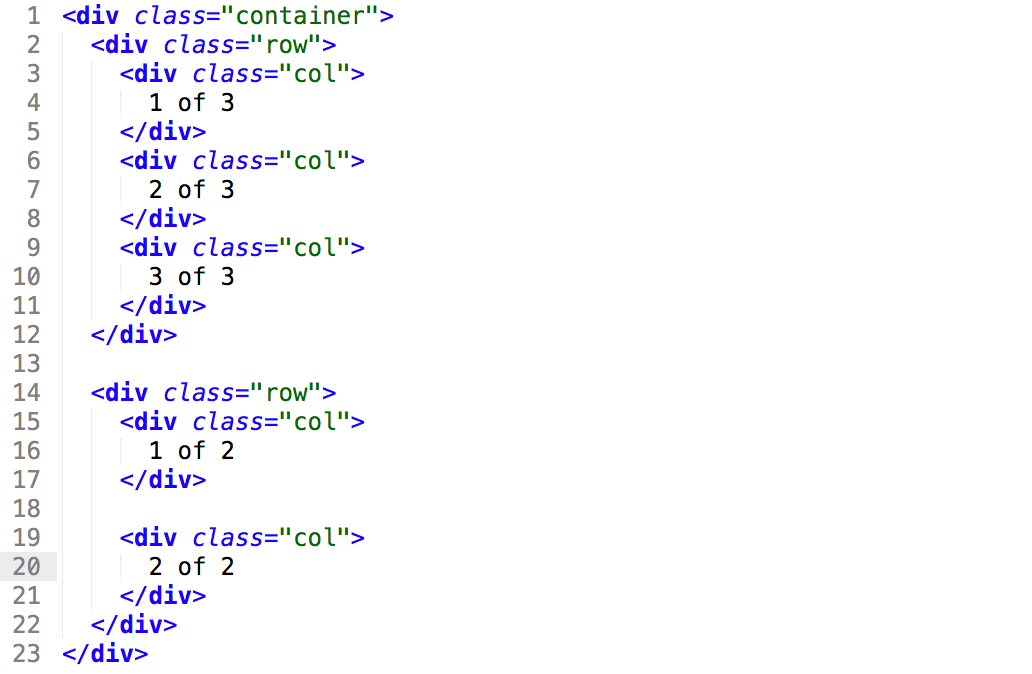 As you can see, by adding a new row, the columns automatically go to the next row. This is extremely useful for grouping content together.

The title of this example may seem confusing, but you need to read it correctly. We will now cover creating multiple rows using only a single row class. This can be achieved with the help of a display utility class called w-100.

The example shows multiple row divs are not required for multiple rows. But the result isn’t exactly identical, as there is no gap between the rows. This is useful for separating content that is still similar. For example, on a social network, it is common to have posts, and each post will contain information such as its date, title, description, and so on. Each post could be its own row, but within the post, the individual pieces of information could be separated using this class.

Up until now, we have only created rows with equal-width columns. These are useful, but not as useful as being able to set individual sizes. As mentioned in the Bootstrap grid system section, we can easily change the column width by appending a number ranging from 1-12 at the end of the col class.

As you can see, setting the explicit width of a column is very easy, but this applies the width to all screen sizes. You may want it only to be applied on certain screen sizes. The next section will cover this.

Let’s use the previous example and expand it to change size responsively on differently sized screens. On extra-large screens, the grid will look like the following:

On all other screen sizes it will appear with equal-width columns:

Now we are beginning to use breakpoints that provide a way of creating multiple layouts with minimal extra code to make use of the available real estate fully.

We aren’t restricted to choosing only one break-point, we are able to set breakpoints for all the available screen sizes. The following figures illustrate all screen sizes, from extra-small to extra-large: 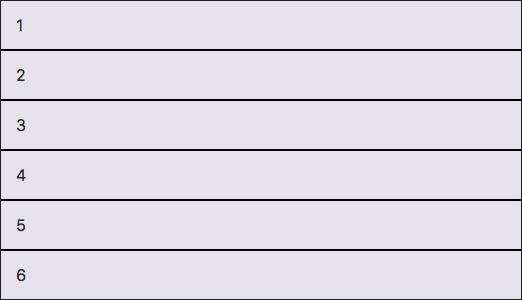 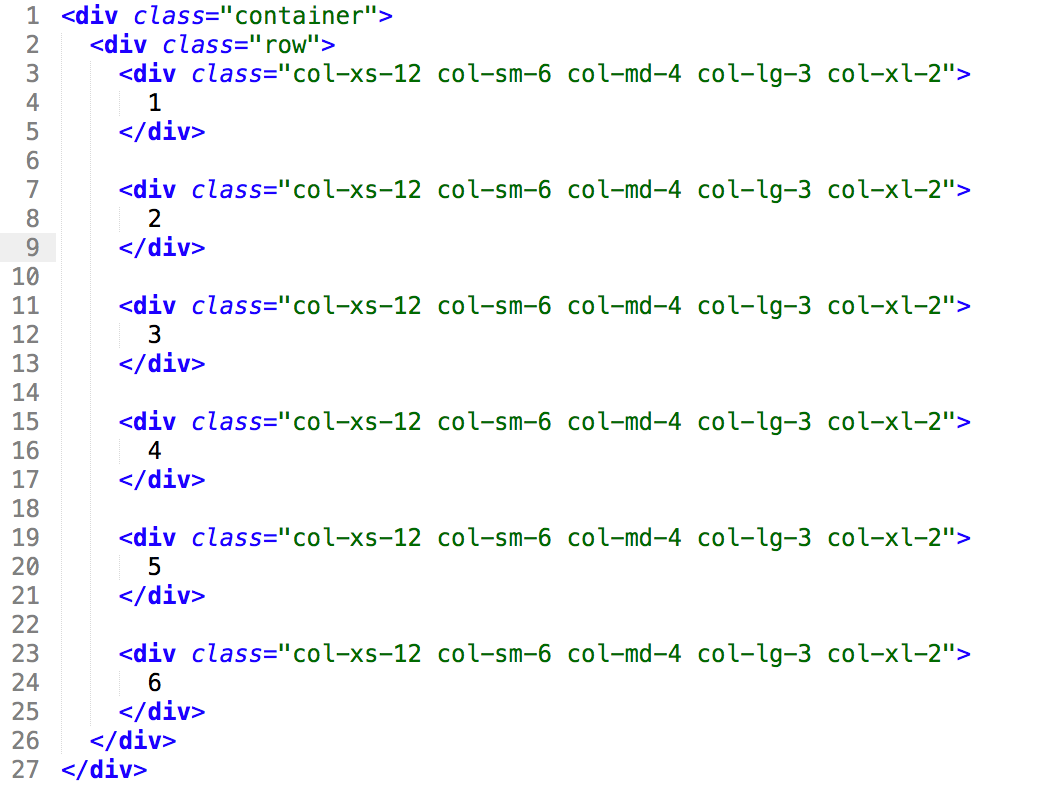 The previous examples provide functionality for use cases, but sometimes the need may arise to align objects vertically. This could technically be done with empty divs, but this wouldn’t be a very elegant solution. Instead, there are alignment classes to help with this as can be seen here: 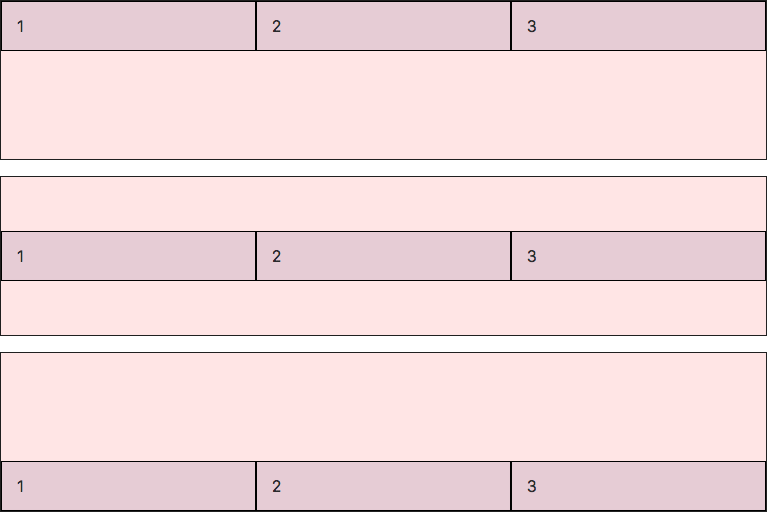 As we can see, you can align rows vertically in one of three positions. The following code produces the aforementioned result: 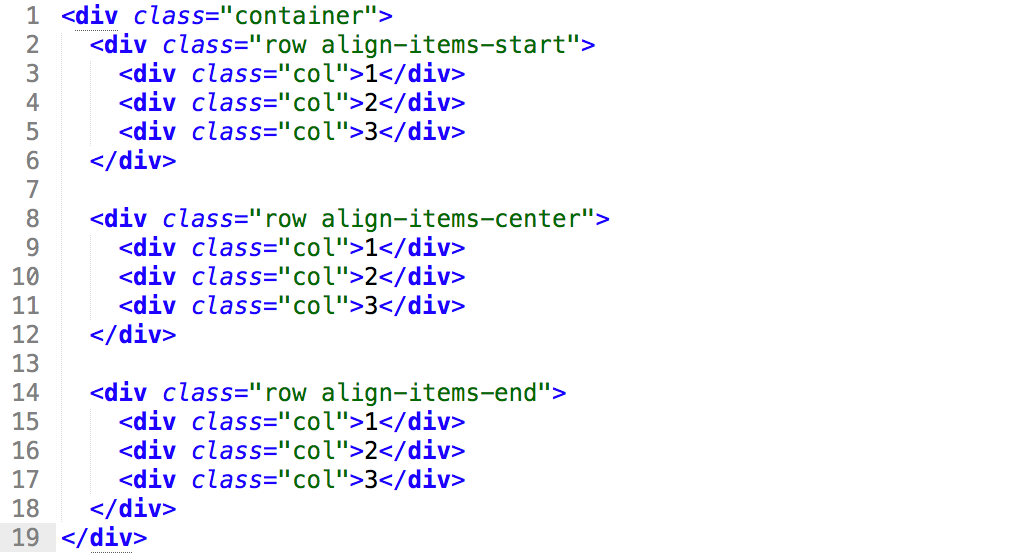 We aren’t restricted to only aligning rows, we can easily align columns relative to each other, as is demonstrated here:

As we vertically aligned content in the previous section, we will now cover how easy it is to align content horizontally. The following figures show the results of horizontal alignment: 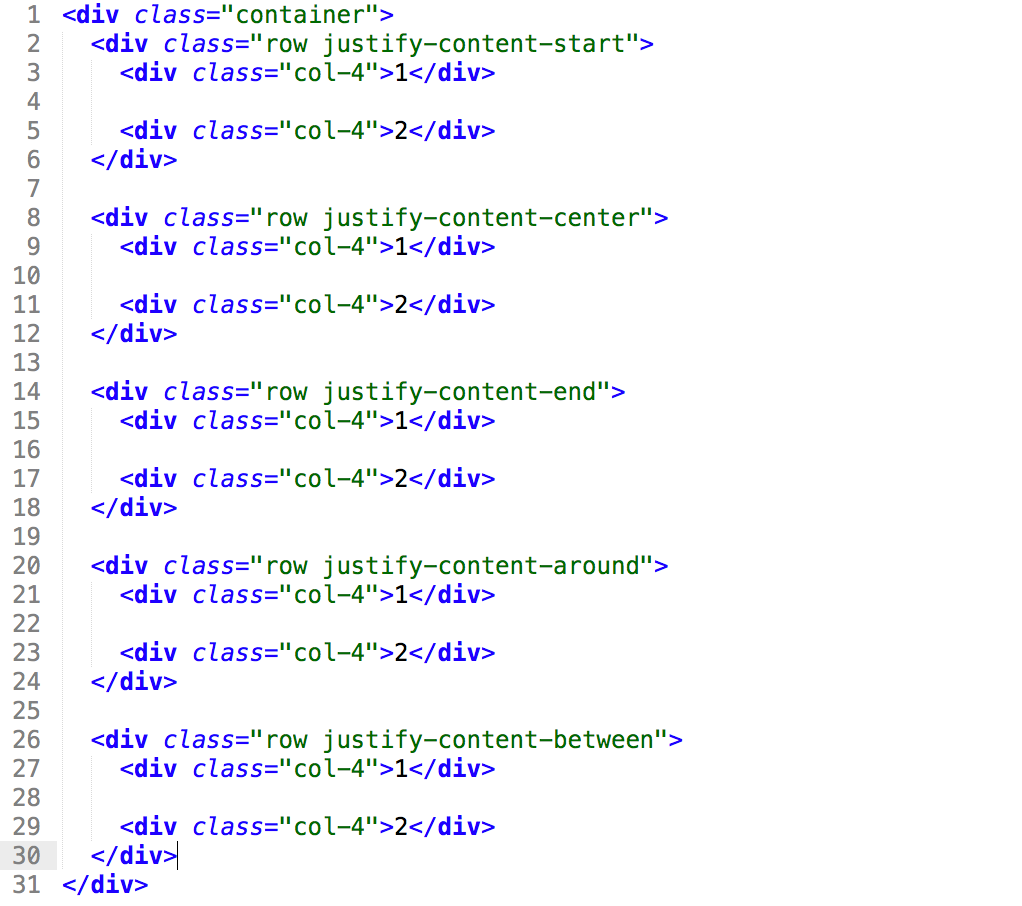 The need may arise to position content with a slight offset. If the content isn’t centered or at the start or end, this can become problematic, but using column offsetting, we can overcome this issue. Simply add an offset class, with the screen size to target, and how many columns (1-12) the content should be offset by, as can be seen in the following example:

The examples covered so far will suffice for most websites. There are more techniques for manipulating the grid, which can be found on Bootstrap’s website.

There are plethora of amazing components that are provided with Bootstrap, thus saving time creating them from scratch. There are components for dropdowns, buttons, images, and so much more.

The usage is very similar to that of the grid system, and the same HTML elements we know and love are used with CSS classes to modify and display Bootstrap constructs. I won’t go over every component that Bootstrap offers as that would require an encyclopedia in itself, and many of the commonly used ones will be covered in future chapters through example projects. I would however recommend taking a look at some of the components on Bootstrap’s website.

If you have found this post useful, do check out this book, ‘ Responsive Web Design by Example‘ to build engaging responsive websites using frameworks like Bootstrap and upgrade your skills as a web designer.

Get ready for Bootstrap v4.1; Web developers to strap up their boots

Web Development with React and Bootstrap