App Metrics is an open source tool that can be plugged in with the ASP.NET Core applications. It provides real-time insights about how the application is performing and provides a complete overview of the application’s health status. It provides metrics in a JSON format and integrates with the Grafana dashboards for visual reporting. App Metrics is based on .NET Standard and runs cross-platform. It provides various extensions and reporting dashboards that can run on Windows and Linux operating system as well. In this article, we will focus on App Metrics, analyse HTTP traffic, errors, and network performance in .NET Core.

This tutorial is an extract from the book C# 7 and .NET Core 2.0 High Performance, authored by Ovais Mehboob Ahmed Khan.

We can set up App Metrics in the ASP.NET Core application in three easy steps, which are as follows:

App Metrics can be installed as NuGet packages. Here are the two packages that can be added through NuGet in your .NET Core project:

Add UseMetrics to Program.cs in the BuildWebHost method, as follows:

Finally, we can add a metrics resource filter in the ConfigureServices method of the Startup class as follows:

Build and run the application. We can test whether App Metrics is running well by using URLs, as shown in the following table. Just append the URL to the application’s root URL:

Appending /metrics or /metrics-text to the application’s root URL gives complete information about application metrics. /metrics returns the JSON response that can be parsed and represented in a view with some custom parsing.

With App Metrics, we can manually define the typical web metrics which are essential to record telemetry information. However, for ASP.NET Core, there is a tracking middleware that can be used and configured in the project, which contains some built-in key metrics which are specific to the web application.

Metrics that are recorded by the Tracking middleware are as follows:

We can configure the threshold of time, T, for each request cycle, and the metrics are calculated based on following conditions:

We can add tracking middleware as a NuGet package as follows:

Tracking middleware provides a set of middleware that is added to record telemetry for the specific metric. We can add the following middleware in the Configure method to measure performance metrics:

Alternatively, we can also use meta-pack middleware, which adds all the available tracking middleware so that we have information about all the different metrics which are in the preceding code:

Next, we will add tracking middleware in our ConfigureServices method as follows:

In the main Program.cs class, we will modify the BuildWebHost method and add the UseMetricsWebTracking method as follows:

ApdexTrackingEnabled is set to true so that the customer satisfaction report will be generated, and ApdexTSeconds is the threshold that decides whether the request response time was satisfactory, tolerating, or frustrating. IgnoredHttpStatusCodes contains the list of status codes that will be ignored if the response returns a 404 status. IgnoredRoutesRegexPatterns are used to ignore specific URIs that match the regular expression, and OAuth2TrackingEnabled can be set to monitor and record the metrics for each client and provide information specific to the request rate, error rate, and POST and PUT sizes for each client.

Run the application and do some navigation. Appending /metrics-text in your application URL will display the complete report in textual format. Here is the sample snapshot of what textual metrics looks like: 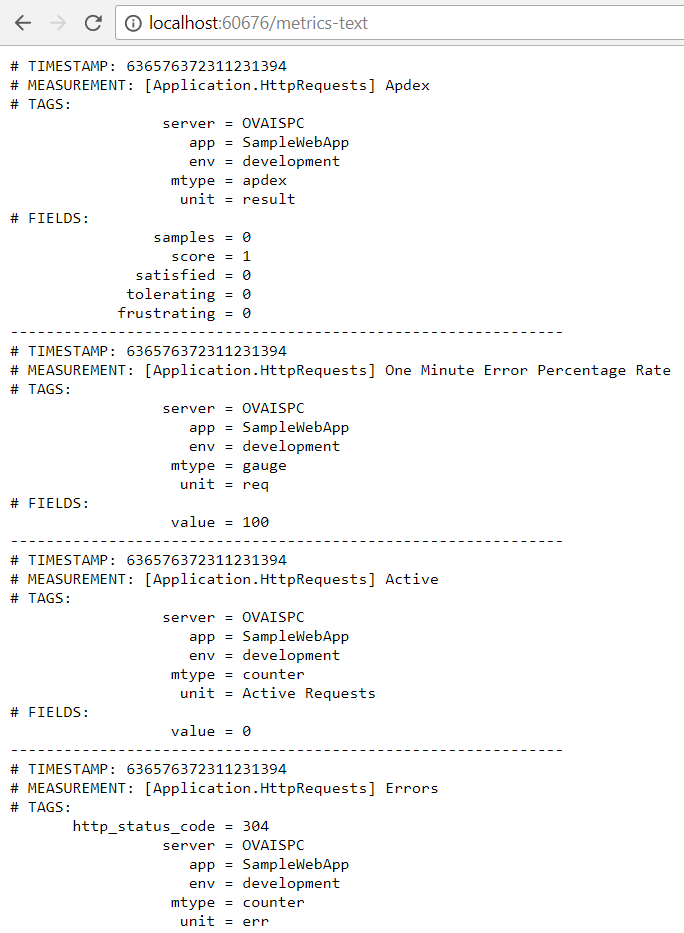 There are various extensions and reporting plugins available that provide a visual reporting dashboard. Some of them are GrafanaCloud Hosted Metrics, InfluxDB, Prometheus, ElasticSearch, Graphite, HTTP, Console, and Text File. We will configure the InfluxDB extension and see how visual reporting can be achieved.

InfluxDB is the open source time series database developed by Influx Data. It is written in the Go language and is widely used to store time series data for real-time analytics. Grafana is the server that provides reporting dashboards that can be viewed through a browser. InfluxDB can easily be imported as an extension in Grafana to display visual reporting from the InfluxDB database.

Setting up the Windows subsystem for Linux

In this section, we will set up InfluxDB on the Windows subsystem for the Linux operating system.

After running the preceding command, restart your computer. 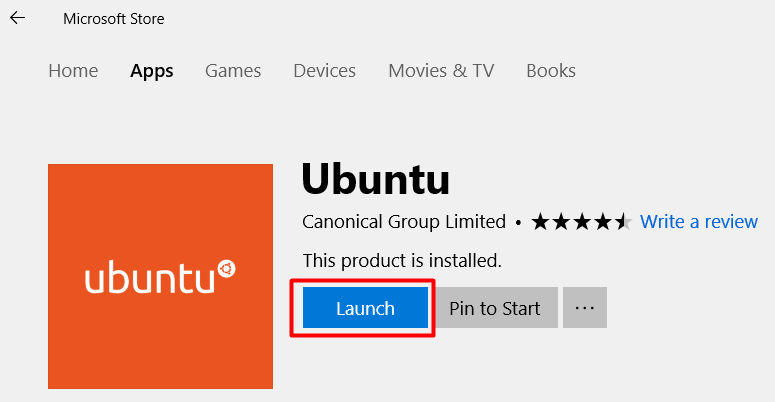 Here, we will go through some steps to install the InfluxDB database in Ubuntu:

It will open up the shell where database-specific commands can be executed.

Grafana is an open source tool used to display dashboards in a web interface. There are various dashboards available that can be imported from the Grafana website to display real-time analytics. Grafana can simply be downloaded as a zip file from http://docs.grafana.org/installation/windows/. Once it is downloaded, we can start the Grafana server by clicking on the grafana-server.exe executable from the bin directory.

Grafana provides a website that listens on port 3000. If the Grafana server is running, we can access the site by navigating to http://localhost:3000.

There is an out-of-the-box InfluxDB dashboard available in Grafana which can be imported from the following link: https://grafana.com/dashboards/2125.

Copy the dashboard ID and use this to import it into the Grafana website.

We can import the InfluxDB dashboard by going to the Manage option on the Grafana website, as follows: 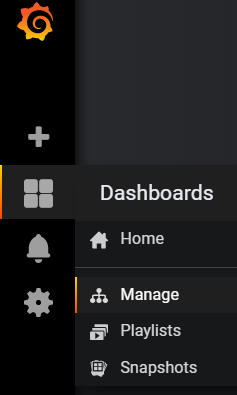 From the Manage option, click on the + Dashboard button and hit the New Dashboard option. Clicking on Import Dashboard will lead to Grafana asking you for the dashboard ID: 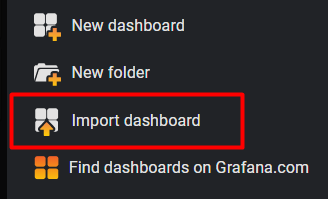 Paste the dashboard ID (for example, 2125) copied earlier into the box and hit Tab. The system will show the dashboard’s details, and clicking on the Import button will import it into the system:

We will now configure the InfluxDB dashboard and add a data source that connects to the database that we just created.

To proceed, we will go to the Data Sources section on the Grafana website and click on the Add New Datasource option. Here is the configuration that adds the data source for the InfluxDB database: 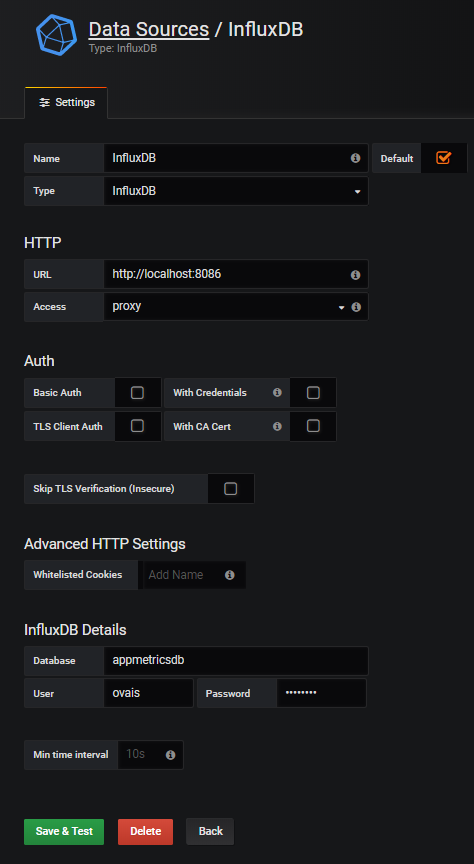 Modifying the Configure and ConfigureServices methods in Startup

Here is the modified ConfigureServices method that initializes the MetricsBuilder to define the attribute related to the application name, environment, and connection details:

In the preceding code, we have set the application name app as the assembly name, and the environment env as the stage. http://127.0.0.1:8086 is the URL of the InfluxDB server that listens for the telemetry being pushed by the application. appmetricsdb is the database that we created in the preceding section. Then, we added the AddMetrics middleware and specified the metrics containing the configuration. AddMetricsTrackingMiddleware is used to track the web telemetry information which is displayed on the dashboard, and AddMetricsReportScheduled is used to push the telemetry information to the database.

Rather than calling UseAllMetricsMiddleware, we can also add individual middleware explicitly based on the requirements. Here is the list of middleware that can be added:

Testing the ASP.NET Core App and reporting on the Grafana dashboard

To test the ASP.NET Core application and to see visual reporting on the Grafana dashboard, we will go through following steps:

Here is the Apdex score colorizing the user satisfaction into three different colors, where red is frustrating, orange is tolerating, and green is satisfactory. The following graph shows the blue line being drawn on the green bar, which means that the application performance is satisfactory: 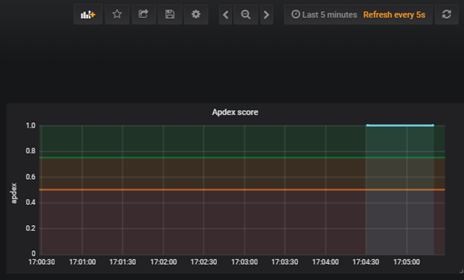 The following snapshot shows the throughput graph for all the requests being made, and each request has been colorized with the different colors: red, orange, and green. In this case, there are two HTTP GET requests for the about and contact us pages: 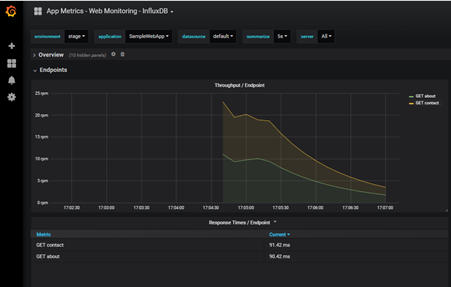 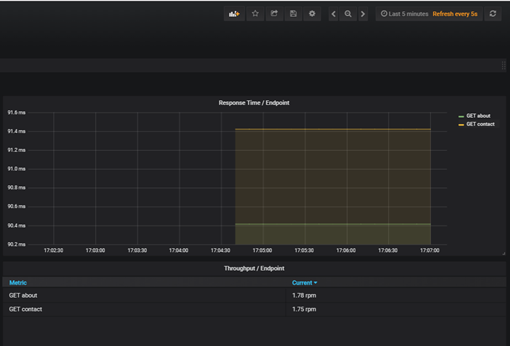 If you liked this article and would like to learn more such techniques, go and pick up the full book, C# 7 and .NET Core 2.0 High Performance, authored by Ovais Mehboob Ahmed Khan.

How to call an Azure function from an ASP.NET Core MVC application