Today, we are shipping .NET 5.0 Release Candidate 2 (RC2). It is a near-final release of .NET 5.0, and the last of two RCs before the official release in November. RC2 is a “go live” release; you are supported using it in production. At this point, we’re looking for reports of any remaining critical bugs that should be fixed before the final release.

You can download .NET 5.0, for Windows, macOS, and Linux:

.NET 5.0 includes many improvements, notably single file applications, smaller container images, more capable JsonSerializer APIs, a complete set of nullable reference type annotations, new target framework names, and support for Windows ARM64. Performance has been greatly improved, in the NET libraries, in the GC, and the JIT. ARM64 was a key focus for performance investment, resulting in much better throughput and smaller binaries. .NET 5.0 includes new language versions, C# 9 and F# 5.0. Check out some .NET 5.0 examples so you can try these features out for yourself.

Today is an auspicious day because we’re kicking off the 2020 [email protected] internal conference. There will be many speakers from the .NET team, but also developers and architects from services teams that rely on .NET to power the Microsoft cloud, sharing their victories and also their challenges. I’m presenting (unsurprisingly) “What’s new in .NET 5.0”. My talk will be easy; I’ll just read the .NET 5.0 blog posts, preview by preview! It will be a great talk. More seriously, the conference is our opportunity to make the case why Microsoft teams should adopt .NET 5.0 soon after it is available. At least one large team I know of is running on RC1 in production. The official .NET Microsoft site has been running on .NET 5.0 since Preview 1. It is now running RC2. The case we’ll make to Microsoft teams this week is very similar to the case that I’ve intended to make to you across all of these .NET 5.0 blog posts. .NET 5.0 is a great release and will improve the fundamentals of your app.

Speaking of conferences, please save the date for .NET Conf 2020. This year, .NET 5.0 will launch at .NET Conf 2020! Come celebrate and learn about the new release. We’re also celebrating our 10th anniversary and we’re working on a few more surprises. You won’t want to miss this one.

Just like I did for .NET 5.0 Preview 8 and .NET 5.0 RC1, I’ve chosen a selection of features to look at in more depth and to give you a sense of how you’ll use them in real-world usage. This post is dedicated to C# 9 pattern matching, Windows ARM64, and ClickOnce.

Pattern matching is a language feature was first added in C# 7.0. It’s best to let Mads reintroduce the concept. This is what he had to say when he originally introduced the feature.

C# 7.0 introduces the notion of patterns, which, abstractly speaking, are syntactic elements that can test that a value has a certain “shape”, and extract information from the value when it does.

The three new patterns in C# 9 are:

I’m a big fan of the BBC Sherlock series. I’ve written a small app that determines if a given character should have access to a given piece of content within that series. Easy enough. The app is written with two constraints: stay true to the show timeline and characters, and be a great demonstration of patterns. If anything, I suspect I’ve failed most on the second constraint. You’ll find a broader set of patterns and styles than one would expect in a given app (particularly such a small one).

When I’m using patterns, I sometimes want to do something subtly different than a pattern I’m familiar with achieves and am not sure how to extend that pattern to satisfy my goal. Given this sample, I’m hoping you’ll discover more approaches than perhaps you were aware of before, and can extend your repertoire of familiar patterns.

There are two switch expressions within the app. Let’s start with the smaller of the two.

The first two patterns are type patterns. The first pattern is supported with C# 8. The second one — Mycroft — is an example of the new simple type pattern. With C# 8, this pattern would require an identifier, much like the first pattern, or at the very least a discard such as Mycroft _. In C# 9, the identifier is no longer needed. Yes, Mycroft is a type in the app.

Let’s keep to simple a little longer, before I show you the other switch expression. The following if statement demonstrates a logical pattern, preceded by two instances of a type pattern using is.

The type isn’t known, so the user variable is tested for the Mycroft type and is then assigned to m if that test passes. A property on the Mycroft object is tested to be not an object. A test for null would have also worked, but wouldn’t have demonstrated a logical pattern.

The other switch expression is a lot more expansive.

The only really interesting pattern is the very last one (before the discard: -), which tests for a Risklevel that is >50 and <100. There are many times I’ve wanted to write an if statement with that form of logical pattern syntax without needing to repeat a variable name. This logical pattern could also have been written in the following way instead and would have more closely matched the syntax demonstrated in the C# 9 blog post. They are equivalent.

I’m far from a language expert. Jared Parsons and Andy Gocke gave me a lot of help with this section of the post. Thanks! The key stumbling block I had was with a switch on a tuple. At times, the positional pattern is inconvenient, and you only want to address one part of the tuple. That’s where the property pattern comes in, as you can see in the following code.

There is a fair bit going on there. The key point is that the tuple properties are being tested, as opposed to matching a tuple positionally. That approaches provides a lot more flexibility. You are free to intermix these approaches within a given switch expression. Hopefully that helps someone. It helped me.

If you are curious about what the app does, I’ve saved the output of the program in the app gist. You can also run the app for yourself. I believe it requires .NET 5.0 RC2 to run.

If there has been a pattern with the last three C# (major) versions, it has been patterns. I certainly hope the C# team matches that pattern going forward. I imagine it is the shape of things, and there are certainly more values to extract.

ClickOnce has been a popular .NET deployment option for many years. It’s now supported for .NET Core 3.1 and .NET 5.0 Windows apps. We knew that many people would want to use ClickOnce for application deployment when we added Windows Forms and WPF support to .NET Core 3.0. In the past year, the .NET and Visual Studio teams worked together to enable ClickOnce publishing, both at the command line and in Visual Studio.

We had two goals from the start of the project:

It’s easiest to show you the experience in pictures.

Let’s start with the Visual Studio experience, which is centered around project publishing. You need to publish to a Folder target. 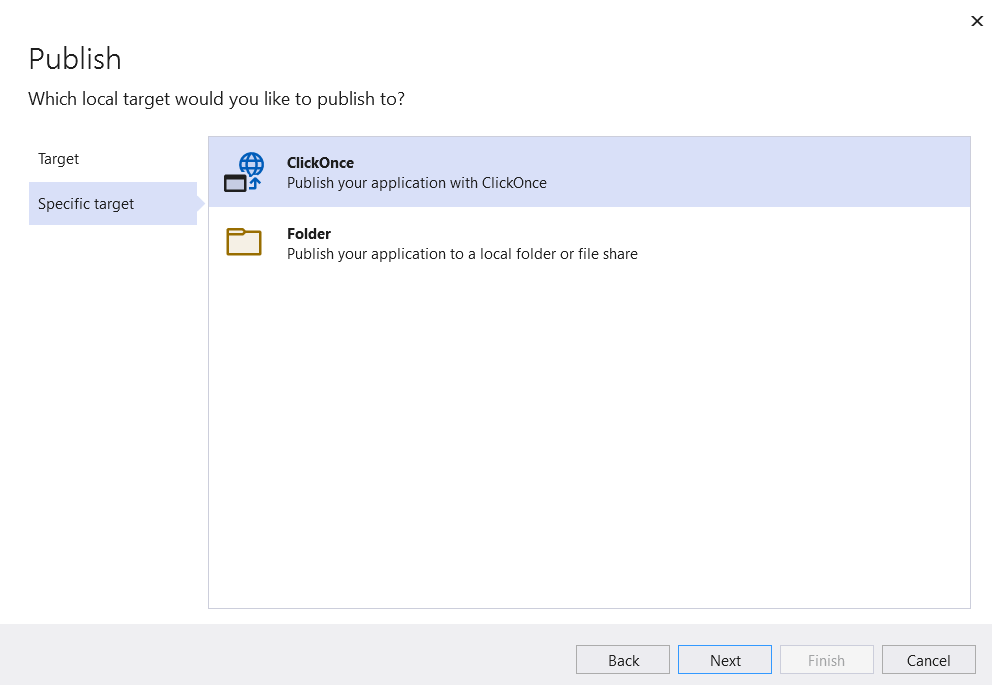 The primary deployment model we’re currently supporting is framework dependent apps. It is easy to take a dependency on the .NET Desktop Runtime (that’s the one that contains WPF and Windows Forms). Your ClickOnce installer will install the .NET runtime on user machines if it is needed. We also intend to support self-contained and single file apps. 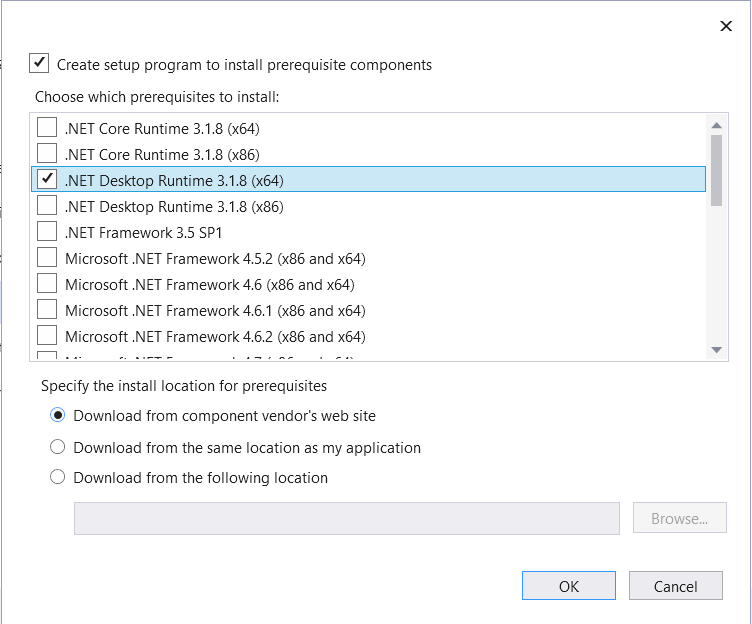 You might wonder if you can still be able to take advantage of ClickOnce offline and updating features. Yes, you can. 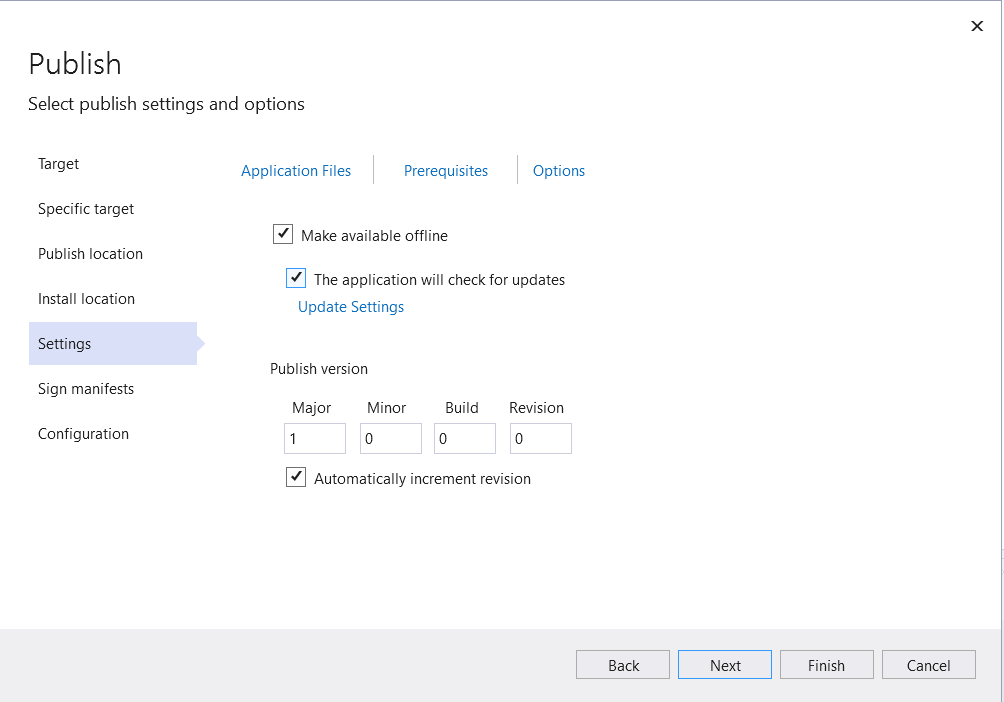 The same install locations and manifest signing features are included. If you have strict signing requirements, you will be covered with this new experience.

The big change with Mage is that it is now a .NET tool, distributed on NuGet. That means you don’t need to install anything special on your machine. You just need the .NET 5.0 SDK and then you can install Mage as a .NET tool. You can use it to publish .NET Framework apps as well, however, SHA1 signing and partial trust support have been removed.

The following commands configure and publish a sample application.

The next command launches the ClickOnce application.

And then the familiar ClickOnce installation dialog appears. 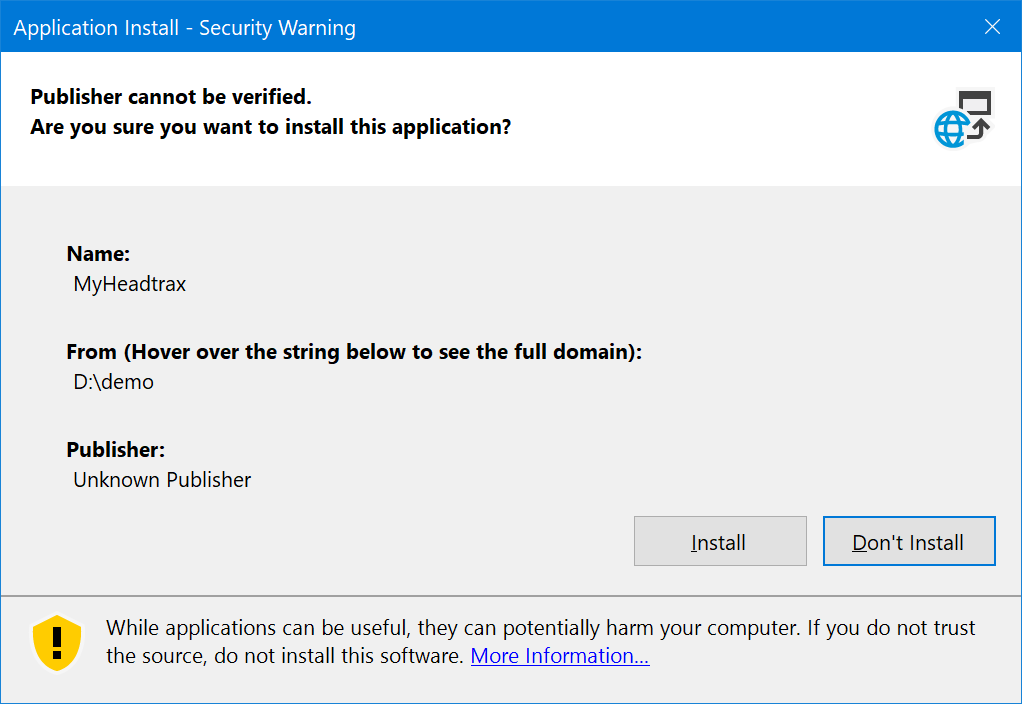 After installing the application, the app will be launched. 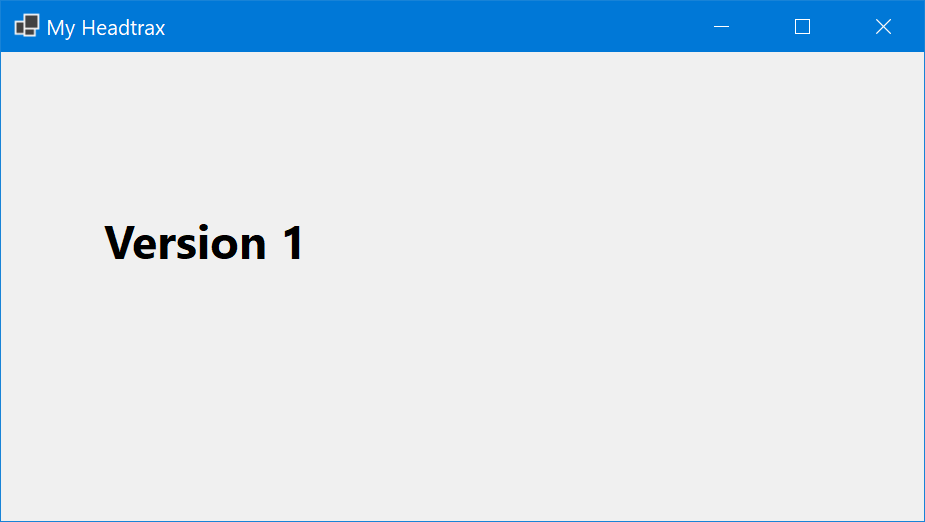 After re-building and re-publishing the application, users will see an update dialog.

And from there, the updated app will be launched.

Note: The name of the Mage .NET tool will change from mage.net to dotnet-mage for the final release. The NuGet package name will remain the same.

This quick lap around ClickOnce publishing and installation should give you a good idea of how you might use ClickOnce. Our intention has been to enable a parity experience with the existing ClickOnce support for .NET Framework. If you find that we haven’t lived up to that goal, please tell us.

ClickOnce browser integration is the same as with .NET Framework, supported in Edge and Internet Explorer. Please tell us how important it is to support the other browsers for your users.

MSI installers are now available for Windows Arm64, as you can see in the following image of the .NET 5.0 SDK installer. 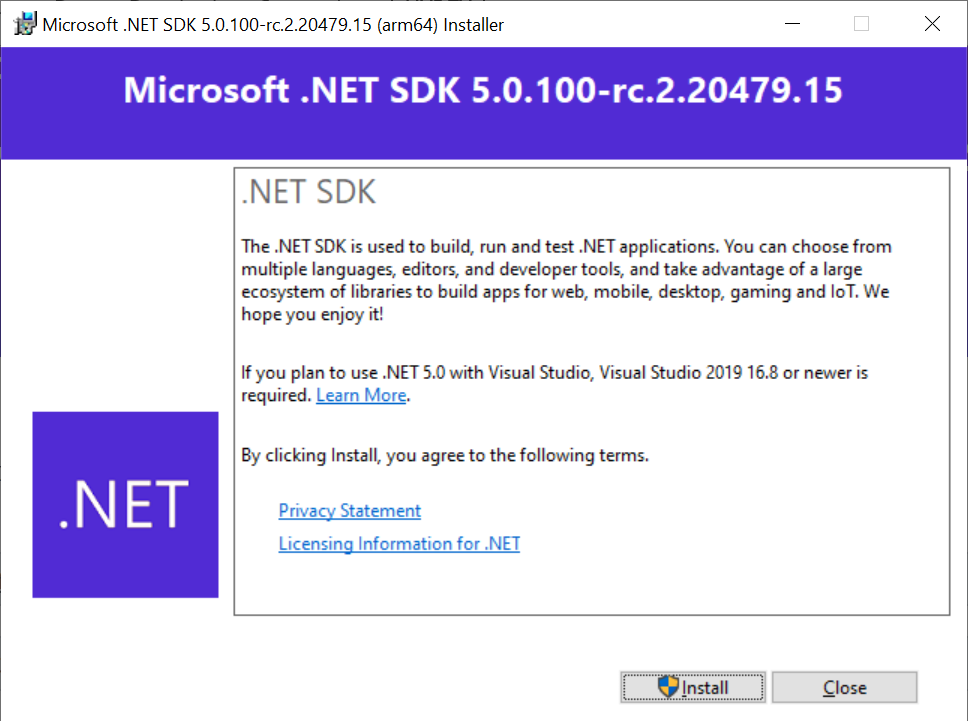 To further prove the point, I ran the dotnet-runtimeinfo tool on my Arm64 machine to demonstrate the configuration.

We’re now so close to finishing off this release, and sending it out for broad production use. We believe it is ready. The production use that it is already getting at Microsoft brings us a lot of confidence. We’re looking forward to you getting the chance to really take advantage of .NET 5.0 in your own environment.

It’s been a long time since we’ve shared our social media pages. If you are on social media, check out the dotnet pages we maintain: