A malware is a software with malicious intent that changes the system without the knowledge of the user. A malware uses the same technologies that are used by genuine software but the intent is bad. The following are some examples:

In this article we will focus on the different types of malware. They can be categorized into different types based on the damage it causes to the system. It does not necessarily use a single method to cause damage; it can employ multiple ways. We will look into some known malware types:

To be clear, malware can act as a backdoor as well a password stealer or can be a combination of any of them. Some of the definitions are simple enough to understand in one line while others need some detailed explanation.

This article is an excerpt taken from the book, ‘Preventing Ransomware‘, written by Abhijit Mohanta, Mounir Hahad, and Kumaraguru Velmurugan.

File infection malware piggybacks its code in clean software. It alters an executable file on a disk in such a way that malware code is executed before or after the clean code in the file is executed. A file infector is often termed a virus in the security industry. A lot of antivirus products tag it as a virus.

In the context of PE executables of Windows, a file infector can work in the following manner:

A virus can infect a file in several ways. It can place its code at different places in the malicious code. File infection is a way to spread in the system.

Many of these file infectors infect every system file on Windows. So malware code has to execute irrespective of whether you start Internet Explorer or a calculator program. Some very famous PE file infectors are Virut, Sality, XPAJ, and Xpiro.

A worm spreads in a system by various mechanisms. File infection can also be considered a worm-like behavior.

A worm can spread in several ways:

A botnet is a piece of malware that is based on the client-server model. The victim machine that is infected with the malware is called a bot. The hacker controls the bot by using a C&C server. This is also called a bot herder. A C&C server can issue commands to the bots. If a large number of computers are infected with bots, they can be used to direct a lot of traffic toward any server. If the server is not secure enough and is incapable of handling huge traffic, it can shut down. This is usually called a denial of service (DOS) attack. A bot can use internet protocols or custom protocols to communicate with its C&C server.

ZeroAccess and GameOver are famous botnets of the recent past.

Keyloggers have been well known for a long time. They can monitor keystrokes and log them to a file. The log file can be transferred to the hacker later on.

A password stealer is a similar thing. It can steal usernames and passwords from the following locations:

Hackers can use these credentials to steal more data or access the private information of somebody or to try to access military installations. They can target executives using this kind of malware to steal their confidential information.

Banking malware is financial malware. It can include the functionality of keylogging and password-stealing from the browser.

Banks have come up with virtual keyboards, which is a major blow to keyloggers. Now, most malware use a man-in-the-middle (MITM) attack. In this kind of attack, a piece of malware is able to intercept the conversation between the victim and the banking site.

In form grabbing, the malware hooks the browser APIs and sends the intercepted data to its C&C server. Simultaneously, it can send the same data to the bank website too.

Tibna, Shifu, Carberp, and Zeus are some famous pieces of banking malware.

The method of money transfer is changing. Cash transactions in shops are changing. POS devices are installed in a lot of shops these days. Windows has a Windows POS operating system for these kinds of POS devices. The POS software in these devices is able to read the credit card information when one swipes a card in the POS device.

Hacktools are often used to retrieve passwords from browsers, operating systems, or other applications. They can work by brute forcing or identifying patterns. Cain and Abel, John the Ripper, and Rainbow Crack were old hack tools. Mimikatz is one of the latest hack tools associated with some top ransomware such as Wannacry and NotPetya to decode and steal the credentials of the victim.

A RAT acts as a remote control, like the name suggests. It can be used for both good and bad intentions. RATs can be used by system administrators to solve the issues of their clients by accessing the client’s machine remotely. But since RATS usually give full access to the person sitting remotely, they can be misused by hackers. RATs have been used in sophisticated hacks lots of times.

They can be misused for multiple purposes, such as the following:

Software is written by humans and, obviously, there will be bugs. Hackers take advantage of some of these bugs to compromise a system in an unauthorized manner. We call such bugs vulnerabilities. Vulnerabilities occur due to various reasons, but mostly due to imperfect programming. If programmers have not considered certain scenarios while programming the software, this can lead to a vulnerability in the software.

Here is a simple C program that uses the function sctrcpy() to copy a string from source to destination:

The memory beyond the memory assigned to the destination can have important things related to the program which would be overwritten. This kind of vulnerability is called buffer overflow. Stack overflow and heap overflow are commonly known as buffer overflow vulnerability. There are other vulnerabilities, such as use-after-free when an object is used after it is freed (we don’t want to go into this in depth as it requires an understanding of C++ programming concepts and assembly language).

A program that takes advantage of these vulnerabilities for a malicious purpose is called an exploit.

To explain an exploit, we will talk about a stack overflow case. Readers are recommended to read about C programs to understand this. Exploit writing is a more complex process which requires knowledge of assembly language, debuggers, and computer architecture. We will try to explain the concept as simply as possible.

The following is a screenshot of a C program. Note that this is not a complete program and is only meant to illustrate the concept:

Now, when the CPU is at line 6, how does it know that it has to return to line 15 after that? Well, the secret lies in the stack. Before getting into line 4 from line 14, the CPU saves the address of line 15 on the stack. We can call the address of line 15 the return address. The stack is also meant for storing local variables too. In this case, the buffer is a local variable in vulnerable_function. Here is what the stack should look like for the preceding program: 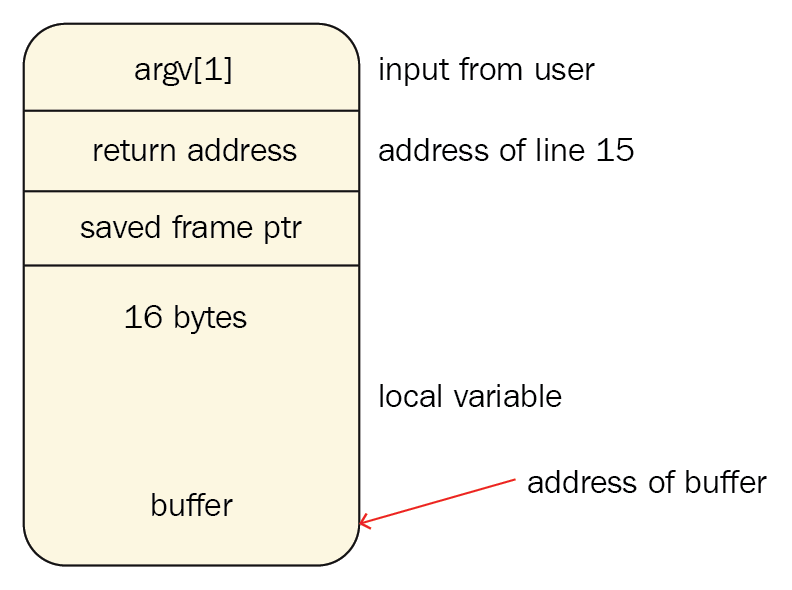 This is the state of the stack when the CPU is executing the vulnerable_function code. We also see that return address (address of line 15) is placed on the stack. Now the size of the buffer is only 16 bytes (see the program). When the user provides an input(argv[1]) that is larger than 16 bytes, the extra length of the input will overwrite the return address when strcpy() is executed. This is a classic example of stack overflow.

When talking about exploiting a similar program, the exploit will overwrite the RETURN ADDRESS. As a result, after executing line 6, the CPU will go to the address which has overwritten the return address. So now the user can create a specially crafted input (argv[1]) with a length greater than 16 bytes. The input contains three parts – address of the buffer, NOP, and shellcode. The address of the buffer is the virtual memory address of the variable buffer. NOP stands for no operation instruction. As the name implies, it does nothing when executed.

Shellcode is nothing but an extremely small piece of code that can fit in a very small space. Shellcode is capable of doing the following:

The final conclusion is, by providing an input to the vulnerable program, the exploit is able to execute shellcode which can open up a backdoor or download malware.

The inputs can be as follows:

You can explore these using the keywords provided as it cannot be explained in a few lines and goes beyond the scope of this book.

The vulnerability description tells us that the bug lies in the SMBv1 server software installed in some of Microsoft operating system versions. Also, the URL can refer to some of the exploits.

Now that you know what types of malware exist, do check out the book, Preventing Ransomware to further know about the techniques to prevent malware and perform effective malware analysis.

IoT Forensics: Security in an always-connected world where things talk

Top 5 cloud security threats to look out for in 2018