There are businesses that are highly dependent on their services hosted online. It’s important that their servers are up and running smoothly during their business hours.

Stock markets and casinos are examples of such institutions. They are businesses that deal with a huge sum of money and they expect their servers to work properly during their core business hours. Hackers may extort money by threatening to take down or block these servers during these hours. Denial of service (DoS) attack is the most common methodology used to carry out these kinds of attacks. In this post, we will get to know about  DoS attacks and their various types.

This article is an excerpt taken from the book, ‘Preventing Ransomware‘ written by Abhijit Mohanta, Mounir Hahad, and Kumaraguru Velmurugan. In this book, you will learn how to respond quickly to ransomware attacks to protect yourself.

What are DoS attacks?

DoS is one of the oldest forms of cyber extortion attack. As the term indicates, distributed denial of service (DDoS) means it denies its service to a legitimate user. If a railway website is brought down, it fails to serve the people who want to book tickets. Let’s take a peek into some of the details.

A DoS attack can happen in two ways:

Attacks can also use a combination of both. For example, UDP flooding and SYN flooding are examples of such attacks.

In this type of attack, the hacker sends a specially crafted packet to the victim. To understand this, one must have knowledge of the TCP/IP protocol. In order to transmit data across networks, IP packets are broken down into smaller packets. This is called fragmentation.

When the packets finally reach their destination, they are re-assembled together to get the original data. In the process of fragmentation, some fields are added to the fragmented packets so that they can be tracked at the destination while reassembling. In a teardrop attack, the attacker crafts some packets that overlap with each other. Consequently, the operating system at the destination gets confused about how to reassemble the packets and hence it crashes.

User Datagram Protocol (UDP) is an unreliable packet. This means the sender of the data does not care if the receiver has received it. In UDP flooding, many UDP packets are sent to the victim at random ports. When the victim gets a packet on a port, it looks out for an application that is listening to that port. When it does not find the packet, it replies back with an Internet Control Message Protocol (ICMP) packet. ICMP packets are used to send error messages. When a lot of UDP packets are received, the victim consumes a lot of resources in replying back with ICMP packets. This can prevent the victim from responding to legitimate requests.

TCP is a reliable connection. That means it makes sure that the data sent by the sender is completely received by the receiver. To start a communication between the sender and receiver, TCP follows a three-way handshake. SYN denotes the synchronization packet and ACK stands for acknowledgment: 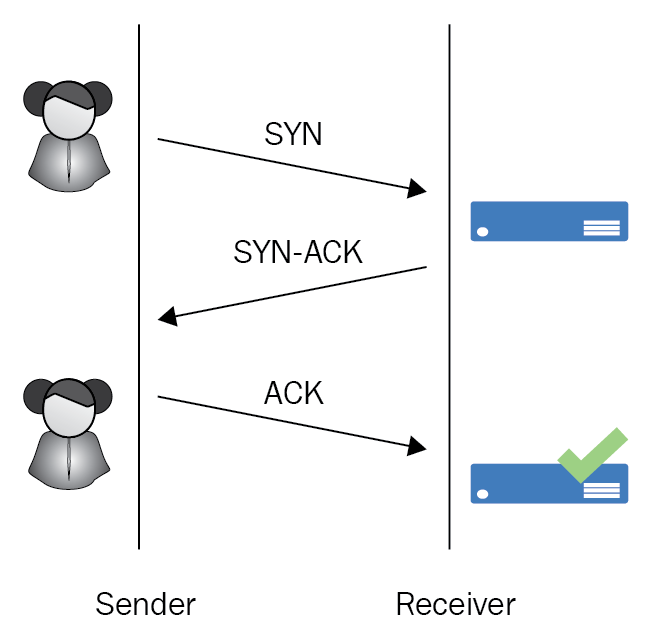 While transmitting data over the internet, the data is broken into smaller chunks of packets. The receiving end reassembles these broken packets together in order to derive a conclusive meaning. In a ping of death attack, the attacker sends a packet larger than 65,536 bytes, the maximum size of a packet allowed by the IP protocol. The packets are split and sent across the internet. But when the packets are reassembled at the receiving end, the operating system is clueless about how to handle these bigger packets, so it crashes. 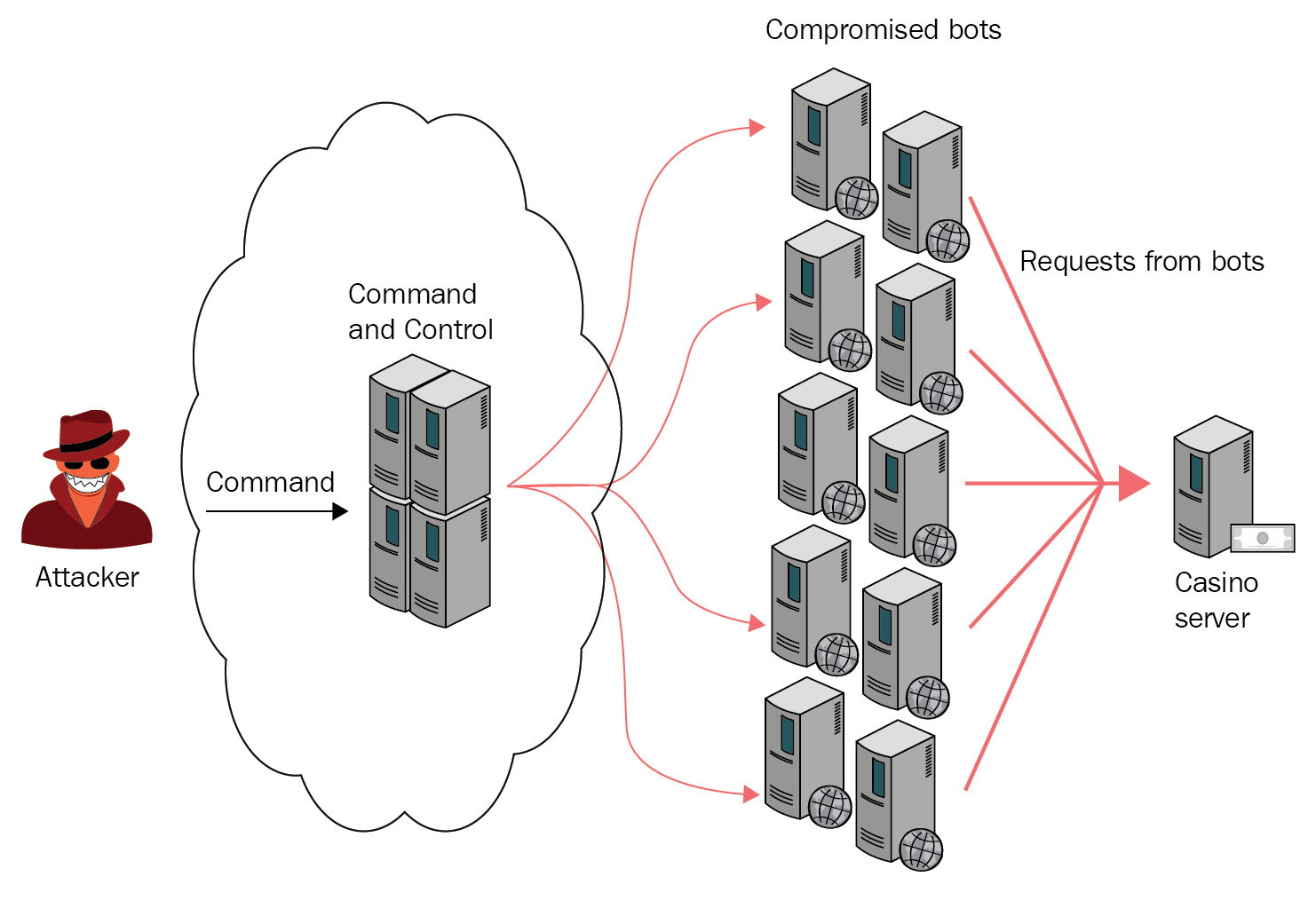 The reflectors are not compromised machines, unlike botnets. Reflectors are machines that respond to a particular request. It can be a DNS request or a Networking Time Protocol (NTP) request, and so on.

We will look at an example of such an attack in the next section. The computers that are used to send traffic to the victim are not the compromised ones and are called reflectors.

There are several groups of cyber criminals responsible for carrying out ransom DDoS attacks, such as DD4BC, Armada Collective, Fancy Bear, XMR-Squad, and Lizard Squad.

These groups target enterprises. They will first send out an extortion email, followed by an attack if the victim does not pay the ransom.

The DD4BC group was seen operating in 2014. It charged Bitcoins as the extortion fee. The group mainly targeted media, entertainment, and financial services. They would send a threatening email stating that a low-intensity DoS attack will be carried out first. They would claim that they will protect the organization against larger attacks. They also threatened that they will publish information about the attack in social media to bring down the reputation of the company: 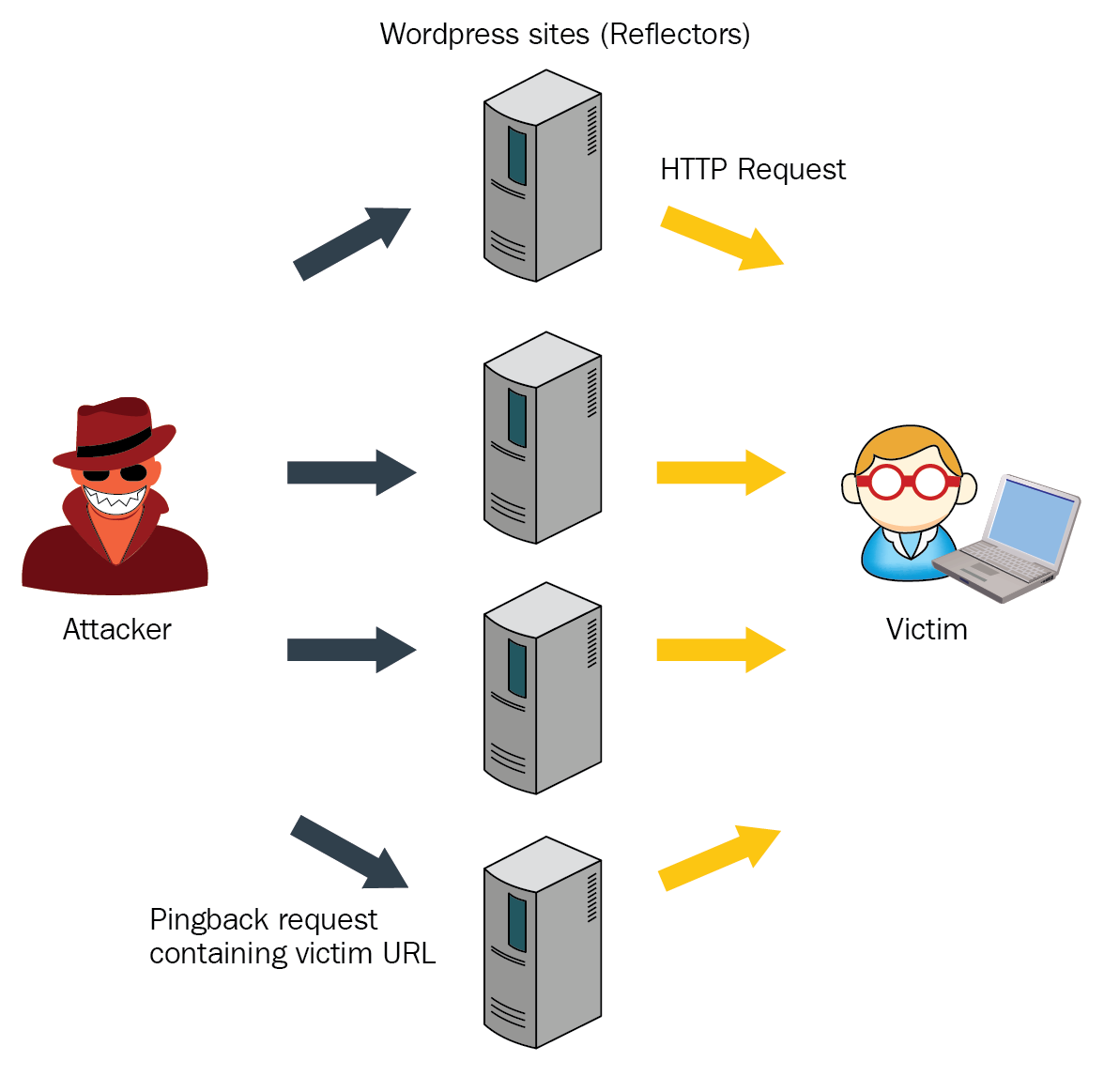 The Armada Collective group was first seen in 2015. They attacked various financial services and web hosting sites in Russia, Switzerland, Greece, and Thailand. They again re-emerged in Central Europe in October 2017.

They used to carry out a demo-DDoS attack to threaten the victim.

Here is an extortion letter from Armada Collective: 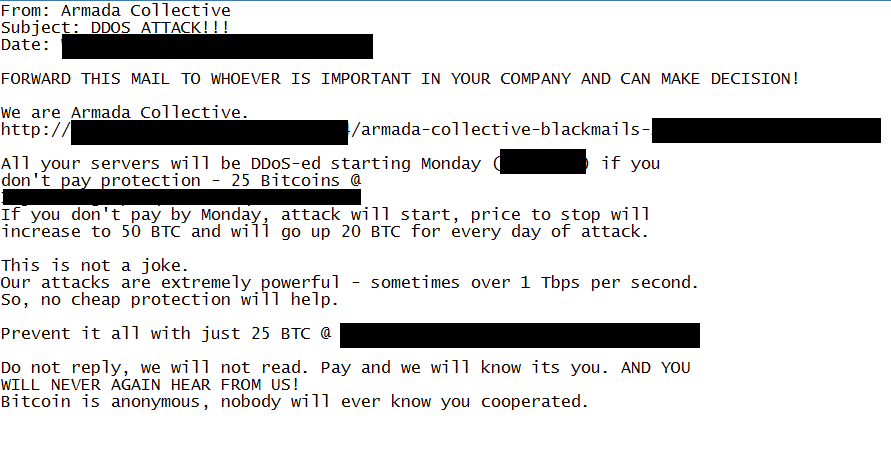 This group is known to carry out reflective DDoS attacks through NTP. The NTP protocol is a protocol that is used to synchronize computer clock times in a protocol. The NTP protocol provides a support for a monlist command for administrative purpose. When an administrator sends the monlist command to an NTP server, the server responds with a list of 600 hosts that are connected to that NTP server.

The attacker can exploit this by creating a forged NTP packet which has a monlist command containing the IP address of the victim and then sending multiple copies to the NTP server. The NTP server thinks that the monlist request has come from the victim address and sends a response which contains a list of 600 computers connected to that server. Thus the victim receives too much data from the NTP response and it can crash: 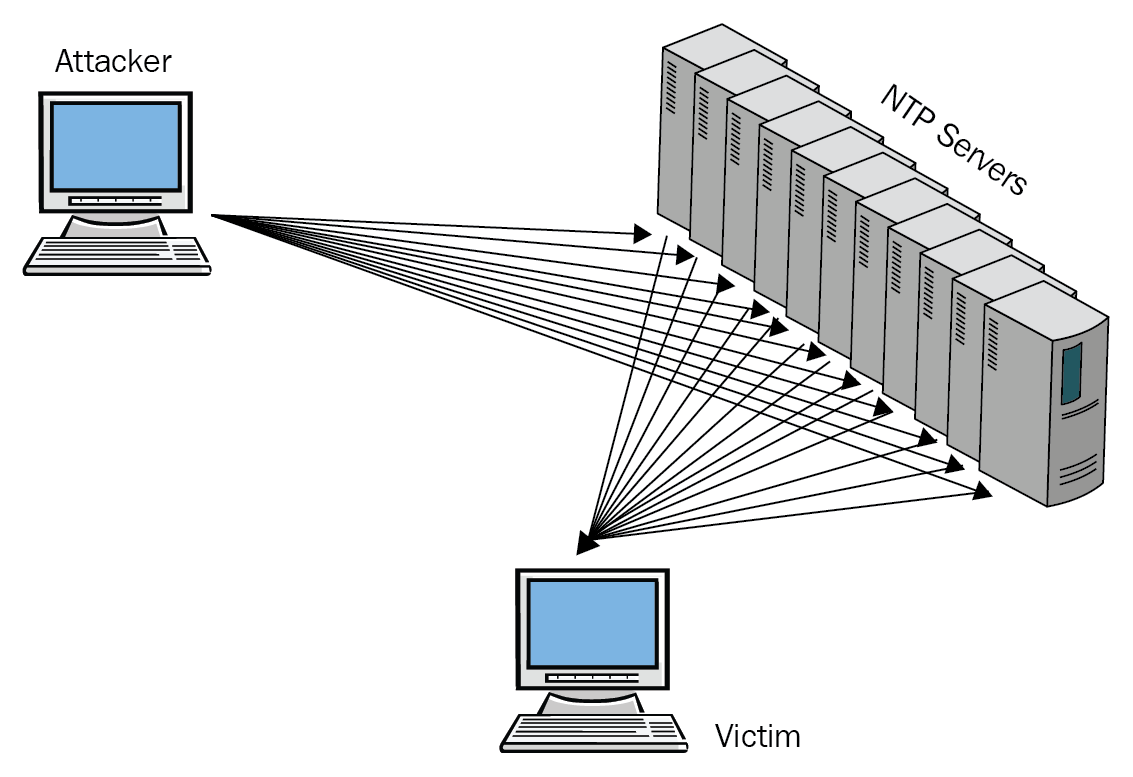 Fancy Bear is one of the hacker groups we have known about since 2010. Fancy Bear threatened to use Mirai Botnet in the attack. Mirai Botnet was known to target Linux operating systems used in IoT devices. It was mostly known to infect CCTV cameras. Here is a letter from Fancy Bear:

We have talked about a few groups that were infamous for carrying out DoS extortion and some of the techniques used by them.

We explored different types of DoS attacks and how they can occur. If you’ve enjoyed this excerpt, check out ‘Preventing Ransomware‘ to know in detail about the latest ransomware attacks involving WannaCry, Petya, and BadRabbit.